We live in a world where robots and AI are designed to handle everything from our daily meetings to dinner reservations. However, it isn’t just Siri and Cortana who can provide a “helping hand” – there are several new entrepreneurs and apps making waves in this realm, too. Additionally, they don’t all require a pricey gadget in order to function. Let’s take a look at five of the up-and-coming apps and services geared toward making your everyday routine a bit easier (if possible) in the Digital Age.

SoundHound’s app, Hound, enables users to do just about anything through voice commands: check the weather, search songs, find a hotel or send a text message, to name a few. What gives it an edge over other digital assistant services, according to the company, is its combination of Speech Recognition and Language Understanding. In other words, it understands the context and details of your voice and commands, allowing for more tailored results and the option for a conversational experience that gradually uncovers layers of relevant information. It’s available for both Android and iOS, and it is free.

Like other digital “assistants” out there, Vokul is designed to respond to your voice to perform general tasks: cue up a playlist, dictate a text message, read emails, listen to your Facebook and Twitter feeds, etc. However, the real benefit is when you want to use your voice to send a command while streaming audio is playing; instead of having to pause your music, Vokul will respond to your voice over your tunes. The app itself is $2.99 and can be found in the Apple App Store.

The Evi app has a database consisting of more than one billion facts to answer all of your queries. Originally known as True Knowledge, it was created to provide users with a Wikipedia-like service that could be activated with questions spoken out loud. Evi was born out of a true success story that began back in 2005. In 2012, Amazon acquired the app, and the rest was history. Today, you can download Evi for free in the App Store or Google Play Store. 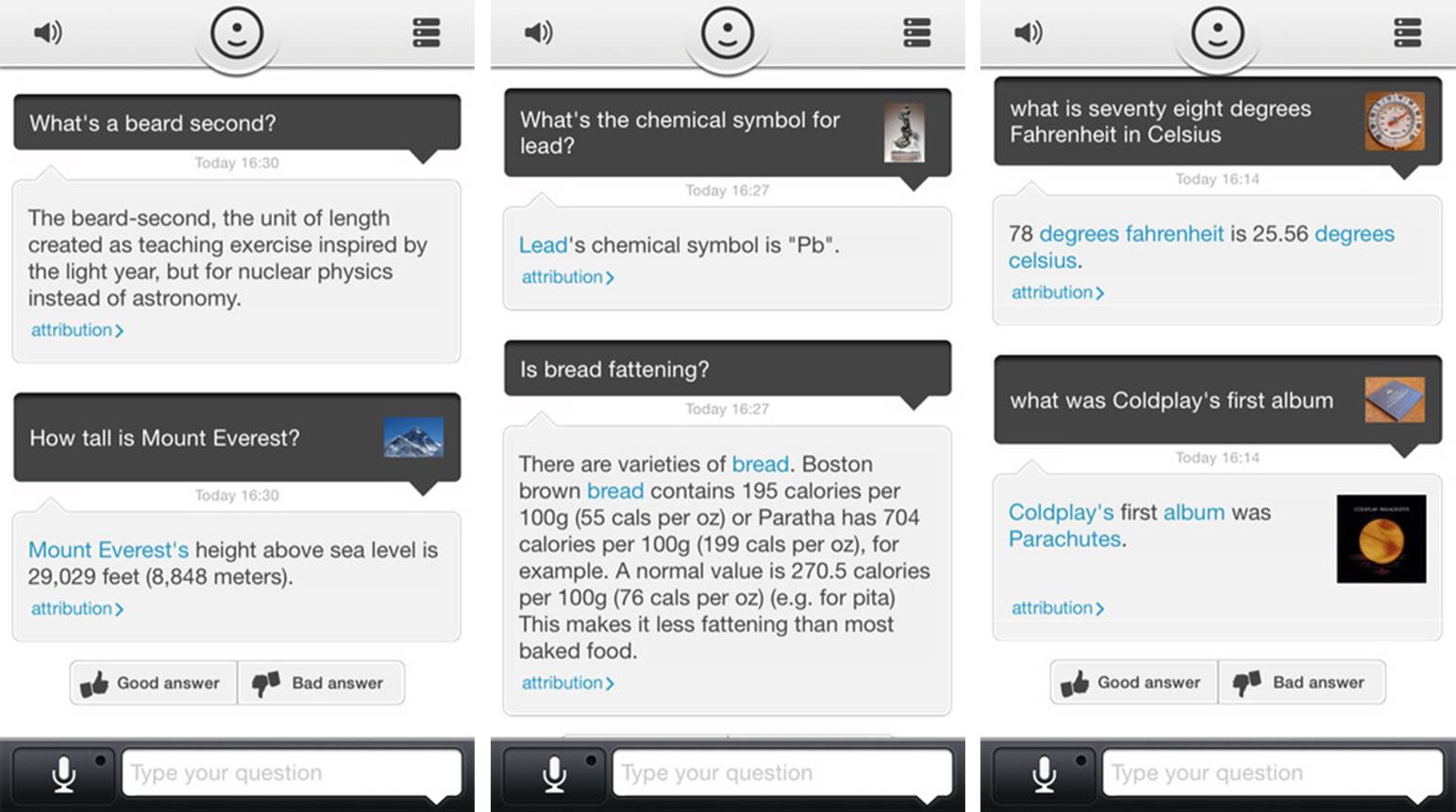 EasilyDo helps iPhone and Android users “contextually” handle everyday tasks to save time, all within a single application that adds a layer of intelligent activity recognition so that you don’t have to give it every little instruction along the way. For example, EasilyDo can check traffic reports to let you know when to head to a scheduled meeting, or identify emails you’ve yet to respond to or read. With the app, you can also track shipments; when you receive an email notification from the courier service, the app will automatically parse and store the tracking number and then handle ongoing notifications regarding status. The app will also scan through emails for “actions” you need to take (e.g., Watch a video, download a file from DropBox, etc.) and then create specific reminders for those actions. EasilyDo was founded in 2011 by Mikael Berner, former CEO of BeVocal and Hetal Pandya, former Director at Nuance.

SkimmAhead is a new service that branches out of The Skimm, a cheeky weekday newsletter produced by Carly Zakin and Danielle Weisberg, two news-savvy twentysomethings. For $2.99 per month, iOS users with The Skimm app can have the hottest, must-follow events integrated into their iCal. Users can keep up to speed on everything from award shows, to concert ticket releases, to presidential debates and show availability on Netflix. Zakin and Weisberg quit their day jobs at NBC back in 2012 to start The Skimm, which now has 3.5 million active users and has raised $7.89 million in funding. 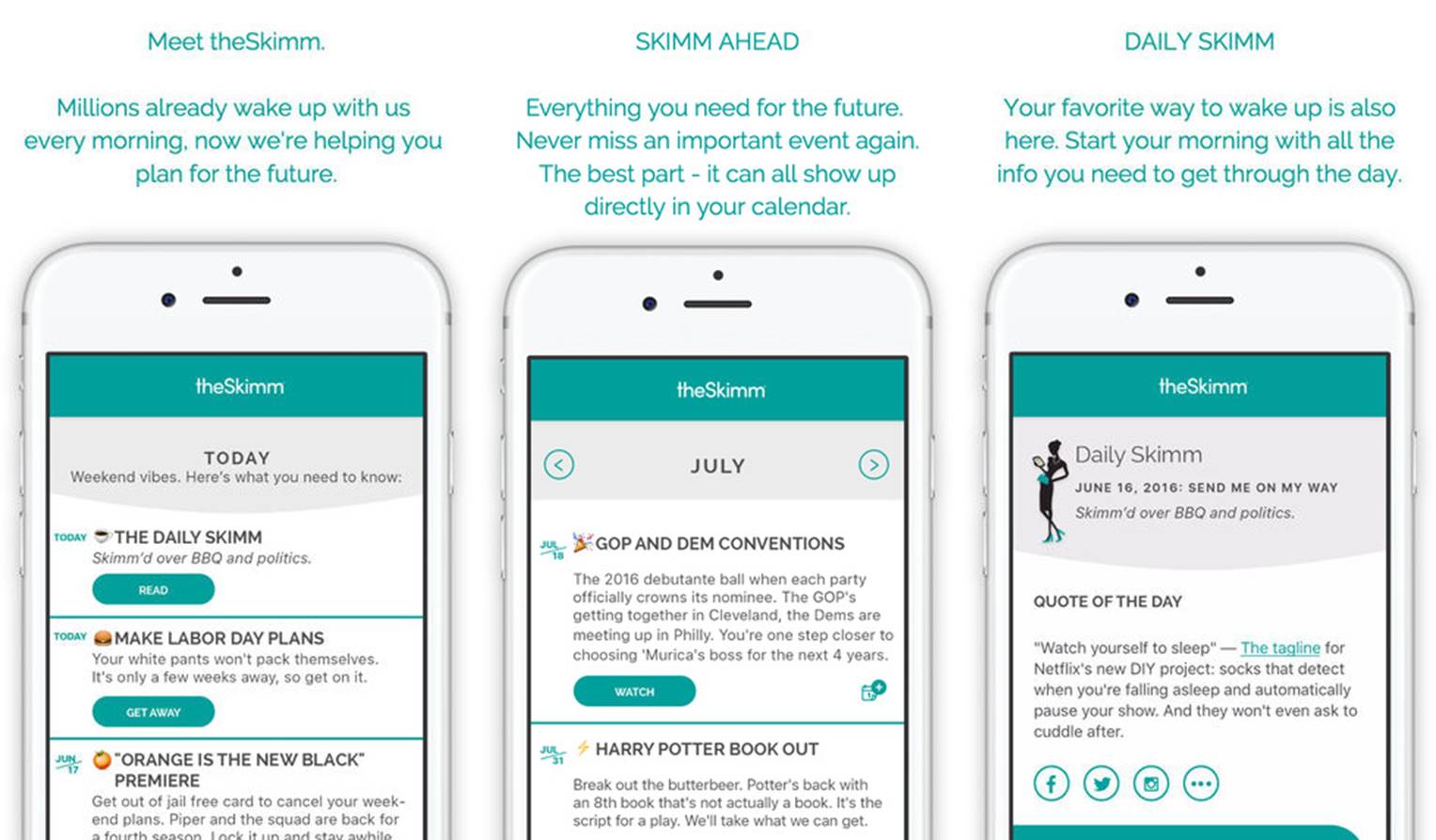