As anyone who’s ever looked for a job knows, the process is stressful, frustrating and time consuming. It doesn’t have to be impossible, though – and it can still be innovative. There are a number of startups aiming to make job searches much less daunting and much more efficient. Here are five on which you should keep a close eye.

This startup is interesting because it takes the concept most associated with Tinder – swiping left or right to acknowledge your feelings and match – and applies it to job listings. After filling out some basic information about your skills and employment record, you’re prompted with a series of job listings that you can swipe right to like or swipe left to pass. On the other end, employers are able to swipe through anonymized profiles, only learning users’ skills and credentials. If there’s a match, you get a notification and are able to chat with the employer within the app.

Founded in 2014, it has raised $2.4 million in funding so far. The goal of the app, according to Switch’s tagline, “Job discovery for people with jobs,” is to allow jobseekers to be “on the market” without current employers finding out (if you recall, survey results were published indicating that about 30% of Tinder user are married), but I see no reason why it shouldn’t be useful to a much broader market. After all, everyone’s always technically “on the market” with their LinkedIn profiles anyway.

This service was founded in 2014 and just raised $10 million at the end of January to support its global expansion efforts – currently the service is only available in London, Paris, Barcelona and Madrid. It is a unique alternative because, as its name suggests, it fills positions within 24 hours of when they’re listed. This benefits employers who need to get new employees in the door quickly, and it relieves candidates who are tired of waiting forever to hear from jobs to which they have applied. Similar to Switch, Job Today has a chat interface where employers and candidates can talk directly to each other, which also helps to cut down on dead air time for both parties. It is likely that this app is most effective for administrative positions, service work, and roles not requiring a substantial amount of “knowledge” expertise. 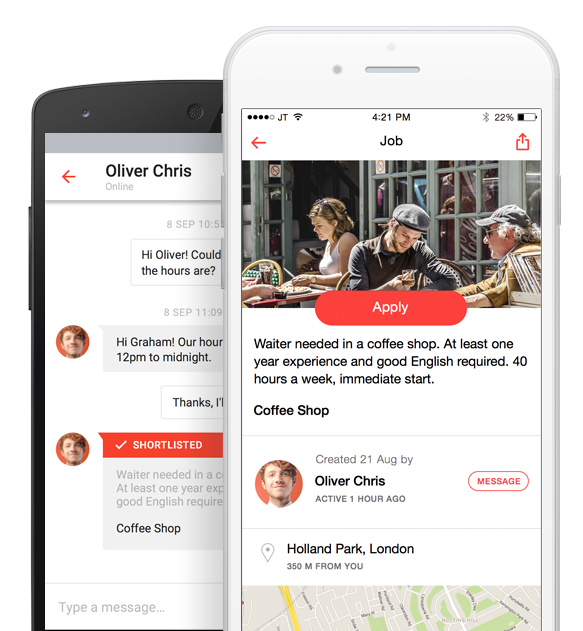 Savvy is slightly different from the majority of main stream job search technology in that it is aimed specifically at helping professional women shape their careers. All the user has to do is set their preferences, and the website finds employers that appear to be a match. The user can track their matches and see who views their profile, similar to LinkedIn, but unlike LinkedIn, employers can directly reach out to users with interview requests ­– instead of making the user apply to dozens of jobs, the app matches candidates and employers like a dating site, apparently reducing sourcing time by 40 percent for employees. Savvy was initially launched in 2014 as Poacht, which worked similarly to Savvy, but CEO Maisie Devine realized that she was most passionate about helping accelerate the careers of business women, and so she rebranded the startup with the new goal in 2015. 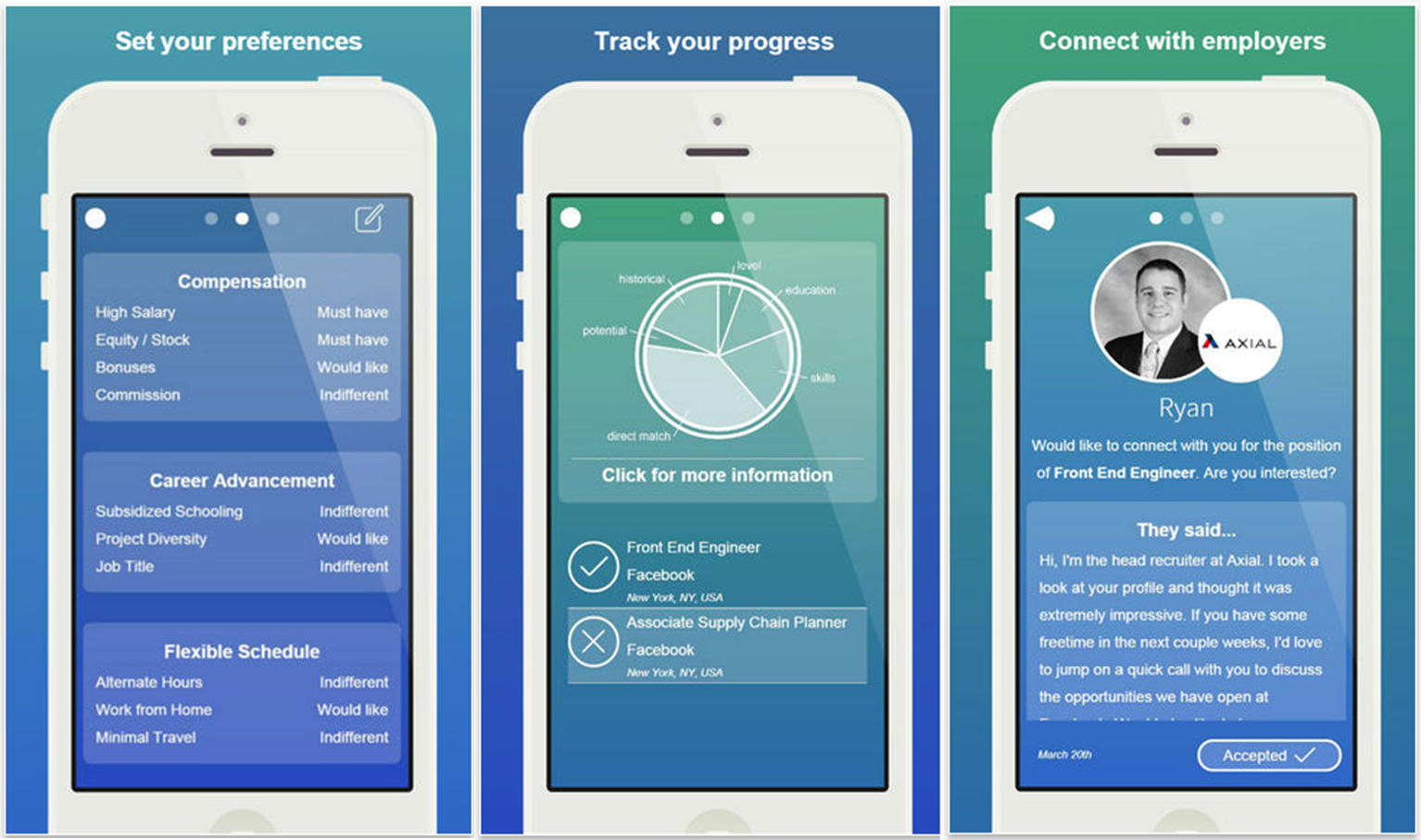 This is another career marketplace, founded in 2012, that makes employers “apply” to the recruits. Companies, including Uber, Facebook and Twitch, send users interview requests, which other companies can see, with salary and equity information, meaning that companies compete for a user’s attention. A user’s profile is similar to a LinkedIn profile, but it details their desired career move so companies can more easily identify who might be a good fit. One catch, though, is that not everyone can sign up for Hired – you have to create a profile, then be invited by the Hired team after they review it and decide that you match the needs of employers who use the site. 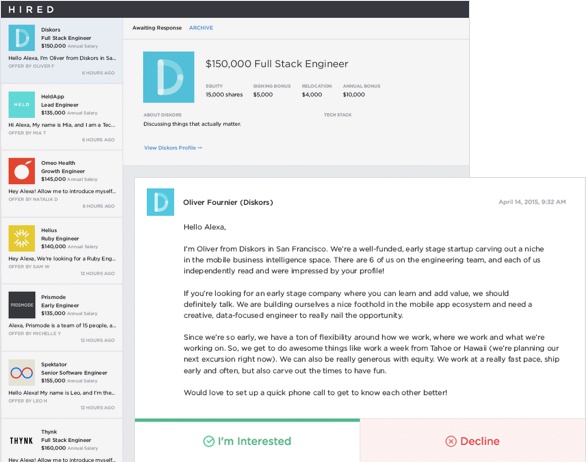 This app was founded in 2014 and connects job seekers to business contacts to facilitate broader and better networking. After answering a few questions about your career path and location, Caliber helps find people in the area for you to connect with and talk to. You also can import contacts you may have already made so that all professional networking communication is in one place. Caliber has yet to publicly announce any funding. 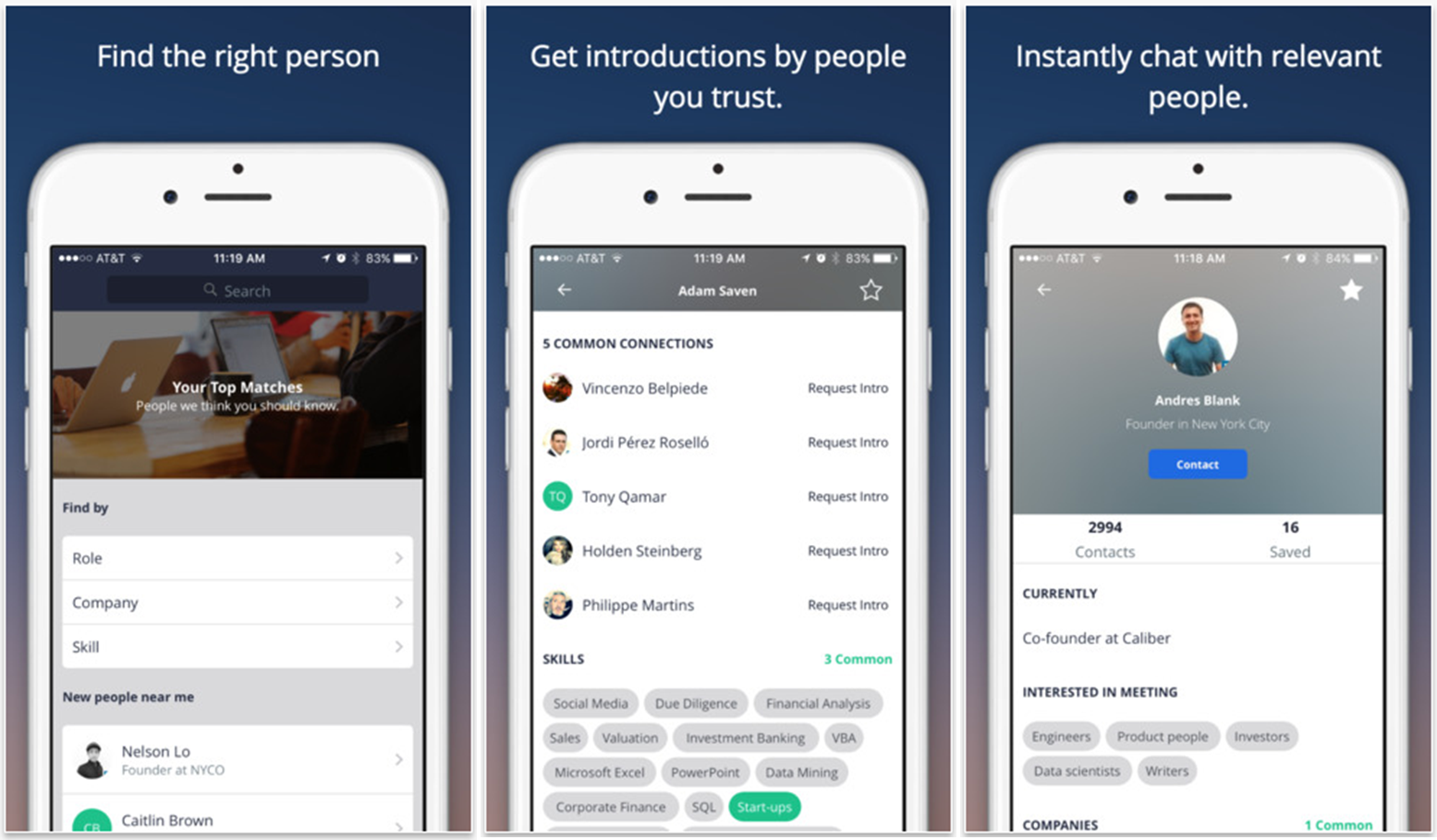