Capturing that magical moment on film isn’t always easy depending on what you’re doing while trying to get that perfect shot. Also, selfie-sticks can only reach so far and capture so much. Now a better solution is emerging: self-flying cameras. They require no direction and even follow you around to do the dirty work while you worry about making the moment worth capturing. Here’s a look at some of the more noteworthy autonomous aerial cameras out there.

Nixie is a wearable that you can strap onto your wrist like a regular watch. Unlike regular watches, it transforms into a quadcopter when it’s unstrapped, and flies based on settings defined in pre-programmed modes. While it’s in the air, it can take pictures or record video, linking with your smartphone to figure out where you are. The device won Intel’s Make It Wearable competition in 2014.

Nixie is currently in the latter stages of its development, and will be available for pre-order soon.

The Hexo+ camera drone follows its subject around without requiring any user direction through any form of standalone hardware controller; instead, it takes flight and tracks users’ position at the press of a button in a smartphone app. Further, the app can be used to set the camera orientation and pull off aerial maneuvers. The rig doesn’t come inclusive of a camera, but does have a mount for GoPro editions Hero 3 through Hero 4.

Snitch is a flying camera most notable for its spherical design. Inside the sphere is a 16-megapixel shooter and a 2-axis gimbal, which ensures photos don’t turn out blurred; videos can be shot in full HD. Operating it is simple: you set the height at which you’d like footage shot and press a button in an app to send the camera up and away. You can preview the view Snitch’s camera has on your smartphone. 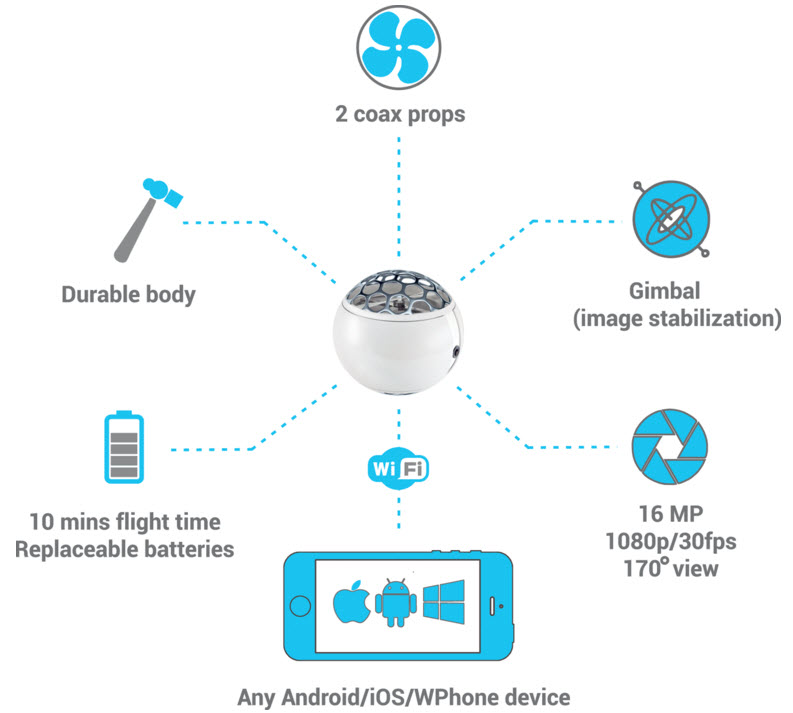 Lily is an autonomous camera drone which tracks users via a disc-shaped device worn on the wrist. A nice addition is a microphone installed in the tracker to sync video and recorded sound. There is a companion app through which camera angles can be manipulated and different kinds of shots can be set up. Images are clicked at 12 megapixels and video at either 1080p or 720p.

AirDog is geared specifically towards adventure sports enthusiasts, though it could be used in other contexts as well. The self-flying camera has flight modes tailored for different action sports, such as surfing, kiteboarding, snowboarding, skiing, and wakeboarding. The device connects to a beacon its makers call an “AirLeash,” suggested that the beacon is worn on the wrist or a helmet. Also part of the package is a smartphone app which can be used to customize flight modes and share footage online.

The Iris+ quadcopter was among the earliest entrants in the autonomous camera drone segment. The quadcopter uses GPS to follow users and can be purchased with or without a GoPro HERO4. Apart from the automated user tracking, the Iris+ can be navigated manually using a radio remote control and can even be made to follow a finger-drawn flightpath using an Android app.