An episode in the second season of Black Mirror depicts a scenario that’s equal parts freaky and intriguing. It is set in a time when technology gets advanced enough that it becomes possible to piece together a cheap imitation of a deceased individual–first just their voice, and then body, and then everything. We’re still a ways from making something as creepy as that happen, but that doesn’t mean the ‘afterlife services’ domain is dead. The answer to the question, “What happens after you die?” is becoming less and less ambiguous with more and more technology.

Launched in October 2016, My Trusted Will gives its users a private, secure way to sustain communications with loved ones even after they’ve passed away. Founder Ebrahiem Shetewy tells me the inspiration for the idea was based in a very personal loss. “My grandmother was diagnosed with cancer, and I was there with her that last week,” he recollects. “Before she died, she held my hand and said, ‘I really wish I could stay a little longer to celebrate your birthday; I really wish I could.'”

The incident prompted Shetewy to come up with a way for people nearing death to compose their thoughts and sentiments for loved ones, and have them delivered to them in a timely manner after their passing. That’s what led to the creation of My Trusted Will, which has taken the form of a web-based application that lets users record calls, emails, messages, and videos, which are then sent to their loved ones based on a pre-set schedule. As Shetewy says, the service is “helping create lovely memories, where users can advise, encourage, celebrate, say hi, sing a song, send a gift, leave phone calls, and do charity–even after passing away “ 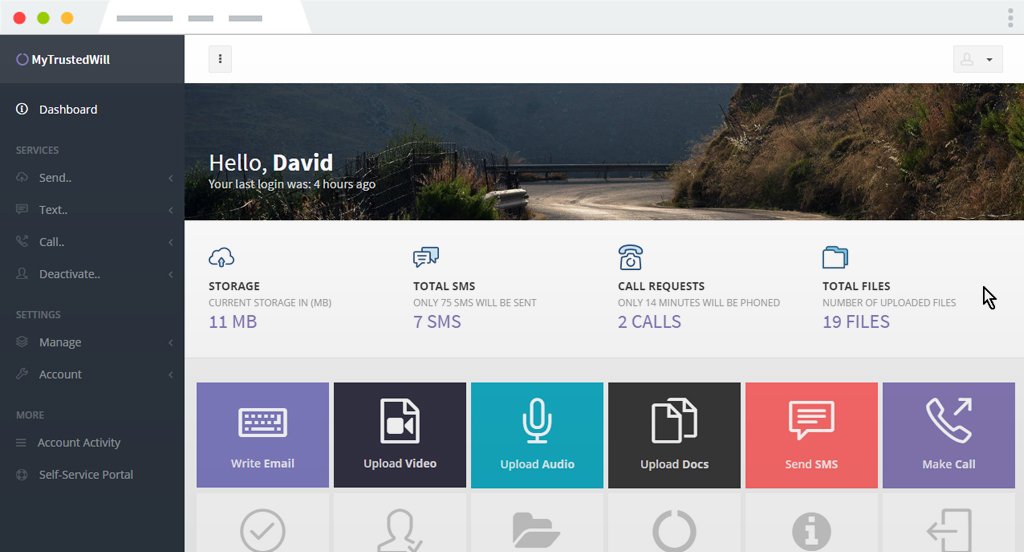 At the core of the software are two artificial intelligence systems: Arya, and The Golden Nerve. Arya is the AI that handles all the legwork that goes into processing user requests and delivering missives to their intended recipients at the right time. The Golden Nerve AI uses a 4-stage verification process to check if the “life status” of any My Trusted Will user has changed in a 25-hour period.

My Trusted Will has added a human touch to the job that The Golden Nerve generally does. It chooses a certain subset of its users to be part of what’s called the Life Local Verifiers Network (LLVN); it’s an additional verification step undertaken by a human to ensure that the change in life status detected is reliable. The AI assigns verifiers in different neighborhoods, who make sure first hand that the individual suspected to have passed away has, after all, passed away. Once it gets the green light, The Golden Nerve changes the status of the individuals as recorded in the system, and lets Arya know to get the scheduled messages rolling. “We already verified 63 deceased people in these last two months,” Shetewy reports.

Since My Trusted Will is at its most fundamental a hosting service for data (calls, emails, SMS, etc.) combined with its scheduled delivery, the pricing structure is based on how much data you intend to use. There’s a free tier that offers 75 text messages, 14 minutes worth of phone calls, unlimited emails, and 50 MB of storage. The $4.99 and $9.99 packages each offer a higher amount of data along with more calls and texts.

The team is currently working on adding new features to the software, which includes facilitating the creation of valid wills based on the rules laid down in different states and cities. Also in the pipeline, very soon in fact, is a round of seed funding. “On 7th January, we will announce our first seed fund,” Shetewy reveals.

The service currently has almost 2,000 registered users, who have already recorded more than 1600 calls and text messages. That’s a lot of people planning ahead and thinking up of ways to make sure that when they do overstay their welcome, it’s edifying to those they love. Shetewy claims reactions from families have been largely positive. “97% of families that got messages and calls from deceased persons didn’t log any negative feedback, but responded with a 5-star rating,” he says. It seems like now when death does do us apart, data and automation can come to the rescue.