Have you ever wanted to know the best joints to find Pabst Blue Ribbon (PBR), pour over coffee, a hard-part pompadour, or just the general hipster area of any given city? Then you’ll love the new app, Where is Williamsburg.

Kate Ray, the creator of the app, used scientific datasets to develop the maps. In an interview with Gizmodo Ray said she noticed that “…Mitte is basically the SoHo of Berlin, and Kreuzberg is the Williamsburg…” She went on to say, “Usually people are gracious enough to accommodate our self-centered perspective so we don’t even realize how bad it is. I made this as a gentle critique of the idea that New York is the center of the world but also because I’d probably use it while traveling.”

In satirical fashion when users click the beer icon, they’re shown all the bars in an area that serve PBR. For dining options, the knife and fork icon shows brunch hotspots, while the coffee icon provides users with the closest places serving pour over coffee. Finally, there’s a jeans icon which indicates the closest American Apparel outlets.

There’s also an interactive component to the app; the Foursquare integration provides additional venue details, and users also have the ability to manually contribute information as they see fit. 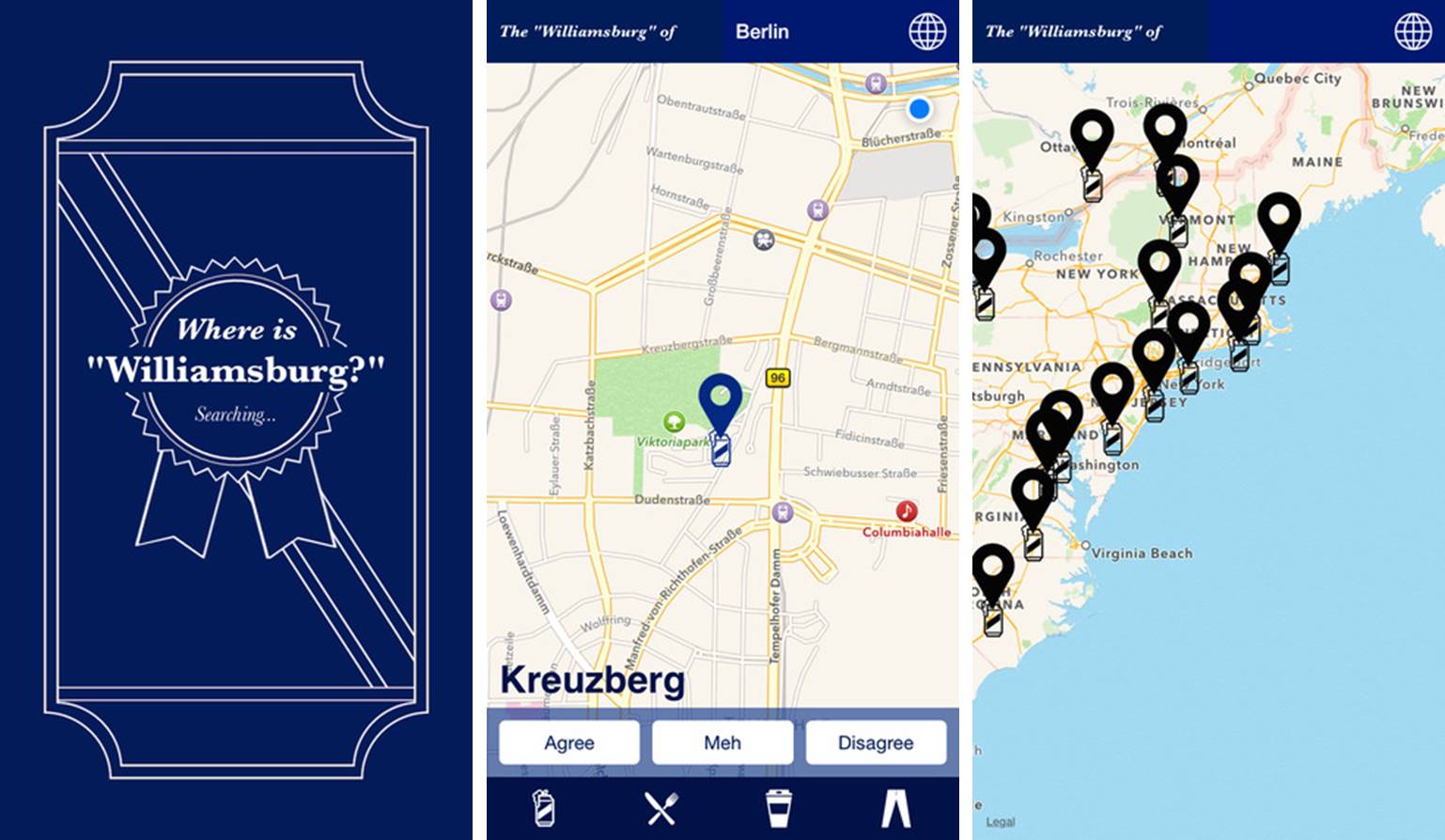 Interestingly, when users search in New York City, the results jump to Bushwick, Brooklyn. It’s not a programming glitch. Bushwick actually is becoming the new hipster hotspot for millennials. Unfortunately, that spillover isn’t going over too well with many.

Breuk Iversen is a designer and writer who specializes in subliminal marketing and branding. He was nicknamed “the mayor of Williamsburg,” because of his publication 11211 Magazine (named after the Williamsburg zip code).

What makes the magazine different from most publications in the genre is that 11211 Magazine is actually one of the things that brought Willamsburg its popularity. Before the hipster movement began, the city was primarily populated by artists and abstract thinkers. This laid the groundwork for the area to become what it is today.

When I spoke to Iversen, he mentioned that similar movements have happened in SoHo, Tribeca, and the East Village. Well, that movement has moved itself overseas and almost everywhere around the globe.

When asked for his thoughts about the Where is Williamsburg app, Iversen stated “Other cities don’t have the substance of Williamsburg. They’re just trying to use the label.”   He went on to mention how the primary success of Williamsburg was the culture and early population, and that it’s not possible to emulate the city’s true success because of its organic development.

Possible or not, a lot of cities are trying. If you want to find out which ones, you should probably download this app.