Whenever my phone tells me that I’m running out of storage space, the first place I go to free up some room is my photos. It’s hard, though, to choose which photos to delete off my phone and only keep on my computer, and I’ve never found a photo organization app or platform that I trust to back up all my photos.

Everalbum, the number one grossing iOS productivity app in over 75 countries, is finally available on Android, and honestly, it’s nothing short of a dream come true for anyone who has been searching for a way to free up space on their phone and keep their precious photos safe and easily accessible. And not a moment too soon for Android users – the Samsung Galaxy S7 and LG G5 are right around the corner, each with powerful cameras.

Everalbum was founded in 2013 and just raised $8 million in funding after their public launch in November 2015. Co-founder Andrew Dudum says the application is about organizing, aggregating and making sense of your photos, as well as making it easy for users to find the most important moments in their lives. On all fronts, Everalbum succeeds.

Downloading the app and signing up is easy through integration with Facebook. Once inside, you just give the app the proper permissions and it starts backing up your photos while you explore the interface. I have about 1,000 photos on my phone, so it took about 10 minutes for them all to be uploaded to Everalbum. Once they were there, my Facebook and Instagram photos seamlessly integrated with my uploaded photos into a single timeline. It was really satisfying, and relieving in some way, to have all of my photos in one place for the first time ever – with almost zero effort. 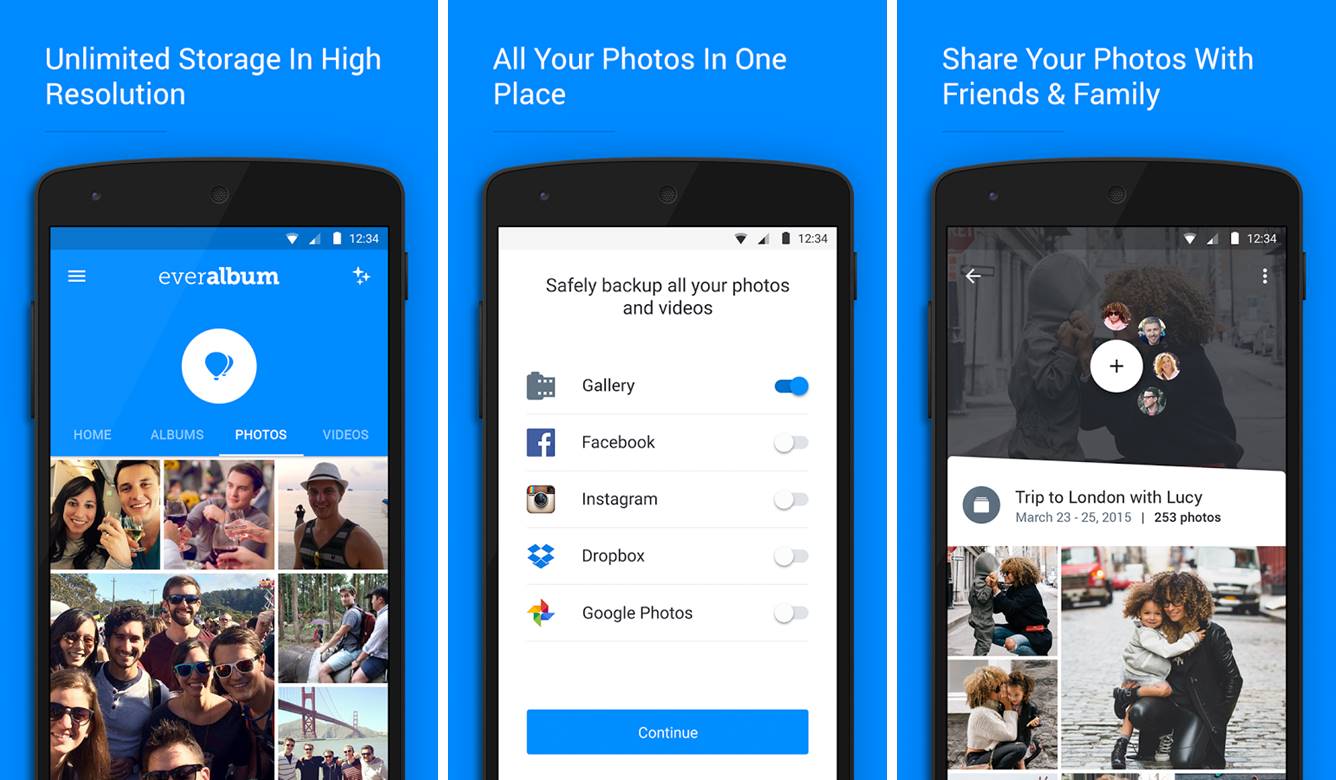 There’s also the option, when moving photos over from Facebook, to integrate other people’s photos that you’re tagged in, which means that literally every single photo from all your important moments, whether it originated from you or not, will be in your collection and fully accessible from your connected devices. Better yet, you can even invite friends to directly contribute their own photos to an album.

With other services, such as Dropbox, Google Photos or Flickr, you have to upload the photos yourself, which means if you wanted all the same photos that Everalbum collects for you, you’d have to spend a great deal of time going through Facebook and Instagram downloading all of the photos you want stored.

Everalbum also gathers your photos automatically into albums based on when and where the photos were taken, making privately sharing photos from Saturday night’s party with your friends that much easier.

My girlfriend thought the albums were particularly cute, and gushed about the different features, especially the fact that she could free up 3 gigabytes of space on her phone. She also brought up the point that the app is great for people who travel a lot, because each album is by default named with the location, day of the week and time of day the photos were taken.

The free version of Everalbum doesn’t allow for video uploads and puts a cap on the resolution of photos, but for $100 a year, or 27 cents per day, Everalbum will let you upload photos in full resolution and allow unlimited video uploads. It may seem a little pricey to drop $100 just for photos, but when you consider how much space Everalbum saves you (1.5 gigabytes in my case), I’d argue it’s worth it. It would be nice if you got more for your money, but perhaps there are plans for that in the future. This is similar to how Android casino app works when playing slot machine on and android phone using slot machine android app.

Everalbum is another case of an app that isn’t doing anything particularly new, but is instead re-purposing, combining and optimizing a bunch of existing features and concepts under one roof; with a 4.5-star rating on iTunes, and the claim that they’ve freed up 5300 terabytes of storage on people’s smartphones, it’s hard to argue that they’re not doing a killer job of it.