The most common reason for knee replacement in the United States is severe osteoarthritis. Osteoarthritis is a degenerative, “wear-and-tear” type of arthritis that occurs most often in people 50 years of age and older, but may occur in younger people too. In osteoarthritis, the cartilage in the knee joint gradually wears away.

There is currently no cure for osteoarthritis. Janne Ylärinne, doctoral student at the Department of Integrative Medical Biology at Umeå University in Sweden and author of a doctoral dissertation on cartilage tissue engineering, explains, “Surgical treatments may help when the damage to the cartilage is relatively minor, whereas joint replacement surgery is the only available solution for people with larger cartilage damage. However, artificial joints only last for a couple of decades, making the surgery unsuitable for young persons. So we need a more permanent solution.”

While there may not be solutions available to patients in the U.S. this year, new technology out of Israel does offer some hope in 2017, at least for patients in Europe. Enter CartiHeal Ltd. – named Israel’s Best Incubator Company for 2012 – the developer of a cell-free, off-the-shelf cartilage and bone regeneration device, that announced the culmination of a $15M financing round last month.

According to the CartiHeal, “The funds will be used to promote ongoing manufacturing scale-up, plan for initial European commercialization in 2017 and expansion of clinical studies to new therapeutic areas.”

The investment was led by Johnson & Johnson Innovation – JJDC Inc. – together with CartiHeal’s existing investors: Elron, Accelmed, Access Medical Ventures and Peregrine Ventures. The market for cartilage rehabilitation is estimated to be worth $ 1.6 billion.

For such a small area of the body, you’ll notice a lot of big numbers getting thrown around. 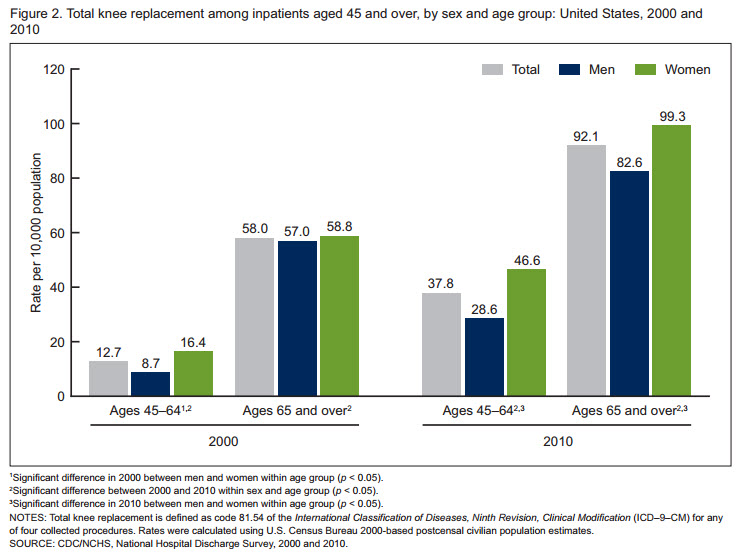 Globally the United States and Europe are the two largest markets for knee implants, with the U.S. accounting for nearly 50 per cent and Europe contributing to around 30 per cent of total procedures worldwide. Money magazine in September 2015 estimated the market for knee replacements in the U.S. to be worth $4 billion.

Giving an aging population staying in the workforce longer, and rising obesity rates, a paper in the Journal Of Joint And Bone Surgery predicts that the demand for total knee replacement surgery is expected to exceed 3 million per year by the year 2030.

What’s behind the growing demand for new knees, with the rate of replacements doubling and the mean age of those receiving knee replacements decreasing?

Blame it on the lifestyle of the baby boom generation, says Mathias Bostrom, MD, an orthopedic surgeon at New York’s Hospital for Special Surgery, where total knee replacements were pioneered. “They’re not willing to be sedentary or change their lifestyle,” Bostrom is quoted in WebMD. “Their joints are beat up and they’re living longer, and they want joints that let them do the things they’re used to doing.” It would seem that the Woodstock generation wants to go dancing into its collective psychedelic sunset in the manner to which it has become accustomed.

A Bloomberg report identifies the knee replacement boom as being driven by two major demographic shifts. “First, people are living longer: Life expectancy for 65-year-olds increased by a year-and-a-half between 2000 and 2010. That, combined with growing numbers of overweight and obese Americans, is exacerbating osteoarthritis, the joint damage that knee implants are meant to relieve.”

The annual economic impact of arthritis in the U.S. is estimated at over $120 billion, representing more than 2% of the gross domestic product. 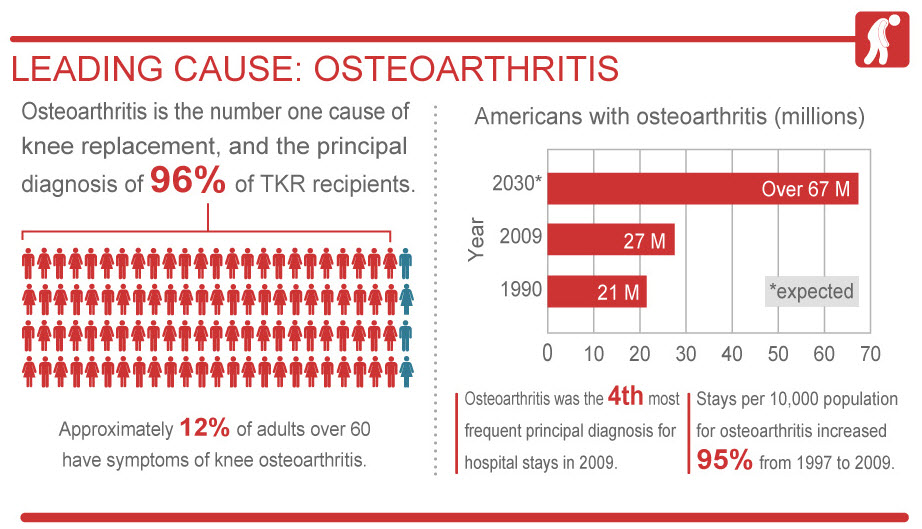 The cost of knee surgery can vary wildly depending on the region or hospital. According to CDC data, on average, it’s increased to about $16,600 in 2012, from $13,900 in 2000, in inflation-adjusted dollars. Though there are risks with any surgery, including possible infections or implant failures, knee replacements are considered a highly cost-effective intervention because they can allow people to continue to work and avoid disability or other expensive care.

On the down side, some patients who get knee replacements don’t get the benefits, particularly if their pain or impairment was mild to begin with. “The actual eligibility criteria for total knee replacement is by definition vague,” says Daniel Riddle, a physical therapist and professor at Virginia Commonwealth University. He led an analysis of 205 knee replacements that judged almost one-third of them to be inappropriate. After two years, that group showed little improvement.

The results, from four study sites, aren’t generalizable to the U.S. but they are a cause for alarm for patients who would fall into this category. Therein lies the rub and the prospective knee replacement patient’s dilemma: what to do in a situation where one is having issues with one’s knees but one’s alternatives are so limited?

For someone suffering from knee pain and loss of mobility caused either by injury, osteoarthritis, or both, the treatment choice continuum involves treatment for symptoms (pain, anti-inflammatories, localized cold therapy compression), lifestyle changes, physiotherapy, hyaluronic acid injections or stem cell therapy on one end, and either partial or total knee replacement surgery on the other, with little or nothing in between.

CartiHeal claims that the company’s cell free and off-the shelf implant – Agili-C™ – has been successfully implanted in nearly 200 patients throughout Europe and obtained CE approval. “Agili-C™ is indicated for the treatment of cartilage and osteochondral defects in degenerative and non-degenerative lesions. Results from procedures in the knee, ankle and great toe indicate regeneration of hyaline cartilage and its underlying subchondral bone, as well as significant improvement in pain levels and reduction of related symptoms.”

“The Agili-C™ implant has demonstrated outstanding ability to reproducibly regenerate hyaline cartilage“, says Mr. Nir Altschuler, Founder & CEO of CartiHeal. “Agili-C™ enables biological resurfacing of cartilage and its underlying subchondral bone through a tissue regeneration process. The device is suitable for a wide range of pathologies from focal traumatic lesions to moderate stages of osteoarthritis.”

Which is a lot of science speak for, “it helps regrow real stuff instead of just totally swapping in fake stuff.”

Altschuler added “We believe that it will provide a good solution for a vast unmet need, especially for patients with osteoarthritis who do not respond to conservative treatment while their condition is not severe enough to justify full joint replacement. This investment will position CartiHeal as a significant player in the treatment of early osteoarthritis.” 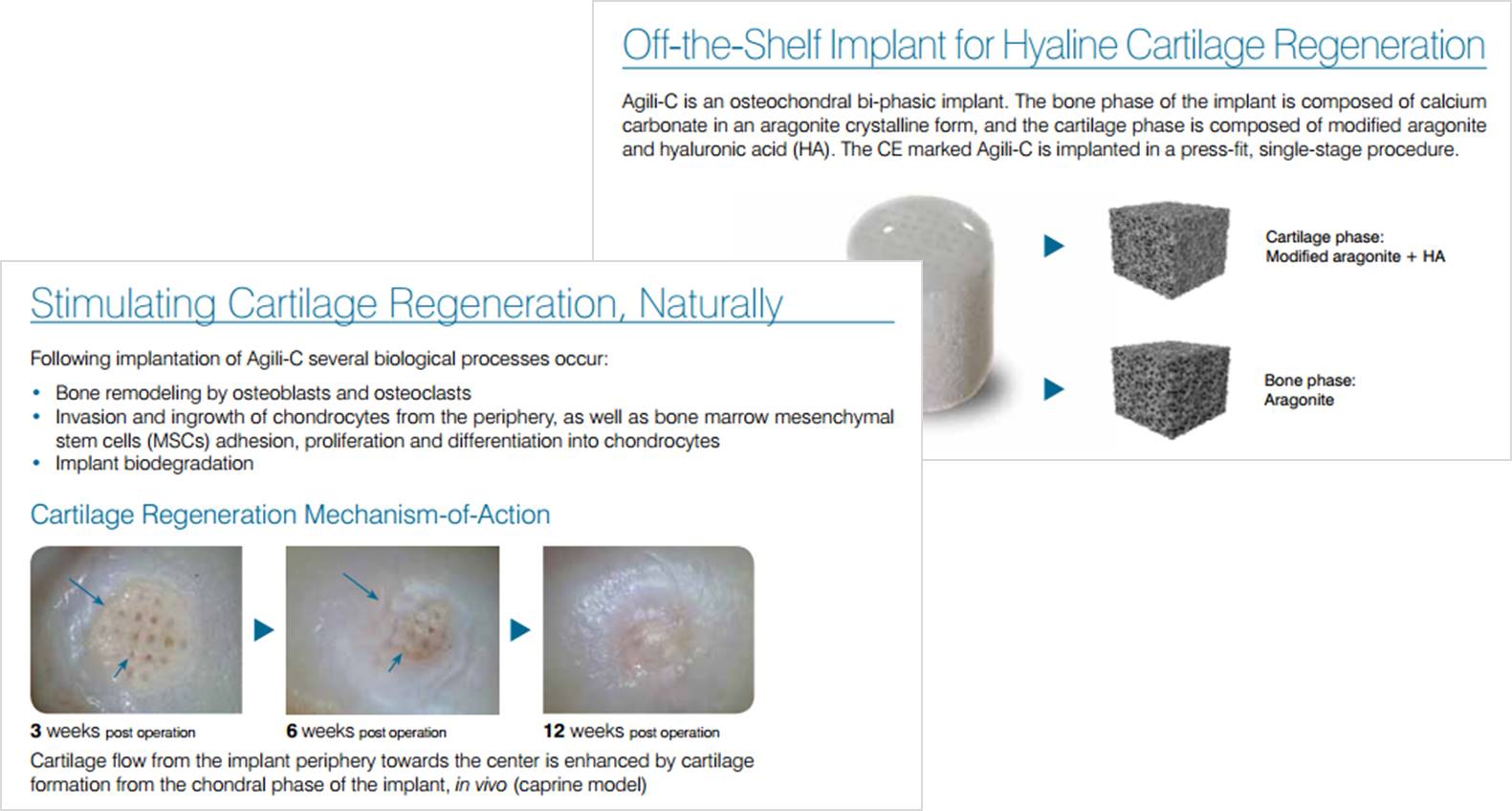 Commenting on cartilage regeneration technology, a prominent orthopedic surgeon had this to say in a discussion on Twitter during the research for this article, “Cartilage regeneration is in its infancy. Most procedures can plug potholes but not pave entire streets .. So if bone on bone ..”

Still, for those for whom less invasive options for their knee issues were limited, CartiHeal does offer a glimmer of light at the end of the tunnel. As does Regentis Biomaterials Ltd., a leader in the field of cartilage repair; they announced the closing of its Series D investment round on February 5, 2016.

Regentis Biomaterials is a privately held company developing biodegradable hydrogels for the regeneration of damaged or diseased tissue. The company’s first product is GelrinC©, a cell-free implant for the treatment of injuries to articular knee cartilage. Implanted as a liquid, GelrinC is cured in-situ to form a resorbable implant which is gradually replaced by newly regenerated cartilage. As part of the investment, Haisco will serve as the exclusive distributor of GelrinC in China.

The investment will be used primarily for conducting a pivotal clinical trial on GelrinC in the U.S. as required to obtain marketing approval from the FDA, according to Alastair Clemow, Ph.D., Regentis Biomaterial’s CEO.

In earlier trials in Europe and Israel, GelrinC is claimed to have provided patients suffering from cartilage injuries with exceptional relief from knee pain and improved function to return to normal activities. According to the company. “The key features of the product- suitability for a wide range of injuries, ease of use and excellent mid-term results – provide the surgeon with an exciting new technique for treating patients.”

Two months into 2016 and two new technologies (both from Israel and both focusing on cartilage regeneration) have been added to the continuum of alternatives to traditional knee replacement surgery. Both companies will face major regulatory issues before their products can be marketed in the U.S., as well as the possibility of push-back from the existing 4-billion-dollar industry.

The birth of what will eventually become the cartilage regeneration industry does however offer hope to those who would prefer to go dancing into the sunset of their lives on the same joints with which they entered this world. Why replace something that can be regenerated? Those who grew up during the Age Of Aquarius might have this message for the traditional knee replacement industry, “These are not the joints we’re looking for.”