Could your desk ever be anything more than a cluttered mess of stationery, gadgets, cables and sundry other objects? Apparently, it can, according to Carnegie Mellon researchers Chris Harrison, Scott Hudson, and Robert Xiao. The team has created a system using which you can turn regular work desks into interactive surfaces on which you can use smartphone applications via augmented reality. Desktopography, as it’s called, is still a research project, but points towards the kind of technology we could have at our disposal in the near future.

The main idea behind Desktopography is to blur the lines between physical and virtual objects. As complex as that sounds, the system only really requires a depth sensor and a projector light to make that possible. Both of those components are housed within a standard light bulb fixture in the prototype created by the team.

The purpose of the projector is to beam the augmented reality screen of an Android phone onto any surface. Meanwhile, the depth sensor creates a three-dimensional map of the surface, allowing Desktopography to keep track of the various objects placed on it. With those in place, users can interact with smartphone applications on any surface, their work desk likely being the most common use-case. The system recognizes gestures to move the screen around, resize it, interact with apps, and minimize icons. And interactivity isn’t limited to the desk itself; objects placed on top of it can be used as part of the screen as well.

Xiao explains the team’s findings in a post titled “Supporting Responsive Cohabitation Between Virtual Interfaces and Physical Objects on Everyday Surfaces.” According to him, one of the main barriers to the creation of technology like Desktopography is the complexity of surfaces like desks; they’re always in constant flux, both in terms of the nature of the objects placed on them and their position. They aren’t the ideal surface on which to project a screen; we would all agree. However, the proof of concept by the team at Carnegie Mellon smartly embraces that unpredictably instead of trying to overcome it. 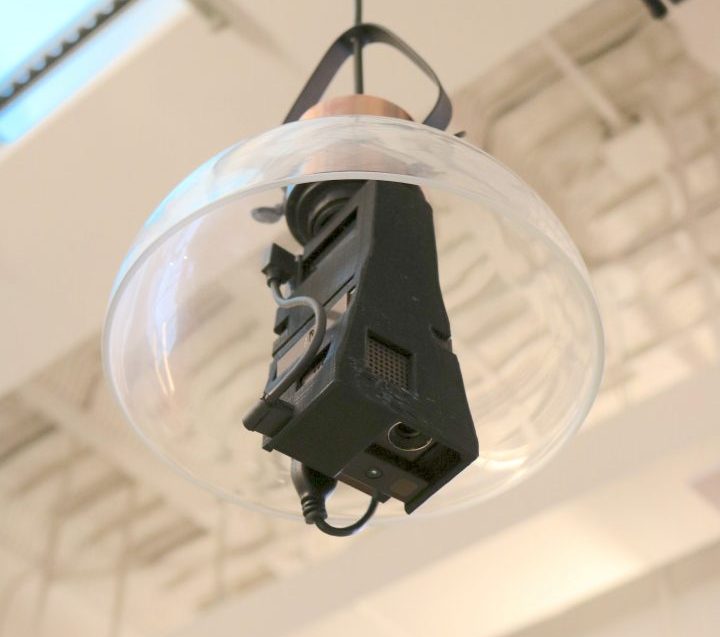 One way it does that is by recognizing new objects introduced on the desk, and adjusting the screen accordingly. So if you place a notebook on it, the projected screen will move and resize to accommodate itself to the nearest empty region. You can also make physical objects part of the screen by tacking apps onto them. For example, you can have the buttons of the calculator app beamed onto the cover of a notebook. The system can track the movement of any object that has an app attached to it, so you don’t have to worry about moving stuff around as long as it remains under light incident from the project bulb.

Desktopograhy cost the research team about $1,000 to build as a one-off project, but Chris Harrison tells Wired that manufacturing it at volume could bring the price down to as little as $50. That’s a small price to pay for augmented reality technology that seamlessly brings virtual objects into the physical world, and also gives you a great excuse to leave your desk messy.