A while ago, I wrote a piece about 4 great startups to help save money, and I thought I had captured the best of them. But when I read about a startup that allows people to save and invest money together, I had to dive back in.

Clink is a no-fee savings and investing app launched publicly in January that, according to their website, takes five minutes to set up. Just connect your bank account, select a personal investment plan and choose the method and frequency for funding your Clink account, which can be as low as $1 a week or a percentage amount every time a credit card is used. Then Clink creates a portfolio for you using the Modern Portfolio Theory, a finance theory based on maximizing return with minimal risk, removing the guesswork of choosing stocks for users while still getting them a return.

Unlike the popular investing app Acorns in that there are no fees to use Clink, and Clink seems to break down the process more for people who aren’t accustomed to investing. Acorns has more options, but Clink is made for people who have never invested before – millennials who may doubt they have enough money to invest, may not understand or trust the system, and may not have time to sit down and create a portfolio themselves.

Acorns does that too, but when you look at their websites side by side, Clink is very step-by-step, easy to follow, and Acorns has a lot of charts and numbers that honestly stress me out just looking at them. 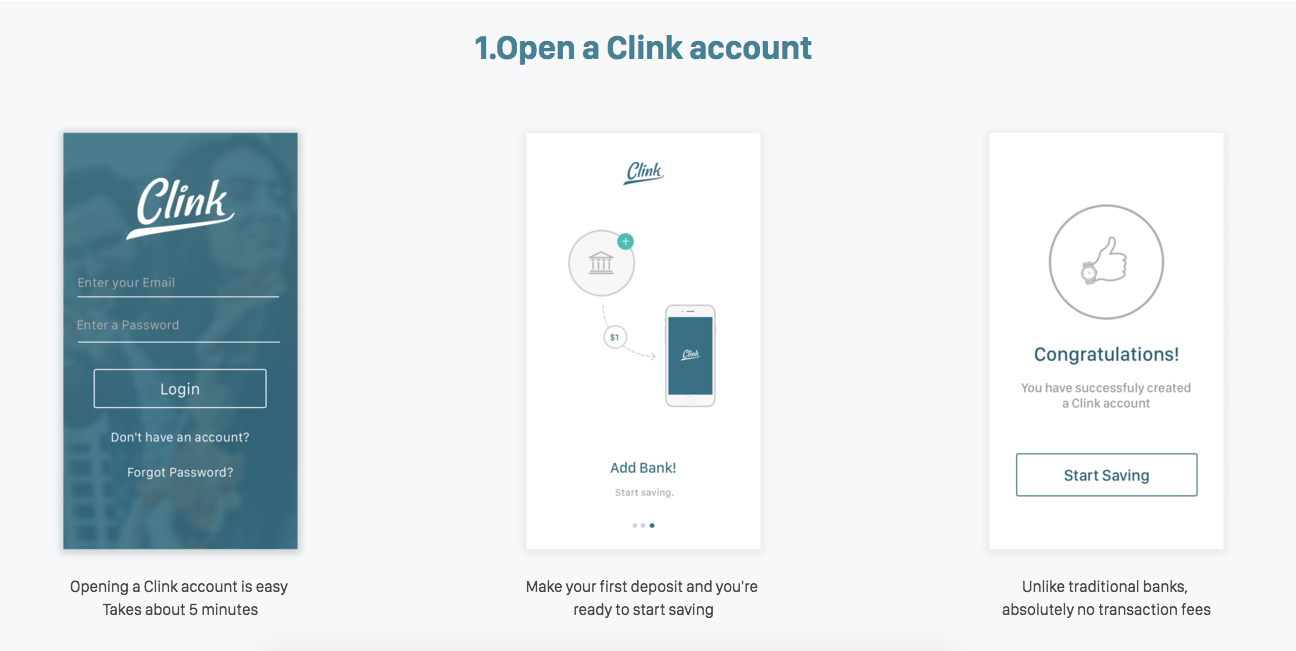 Additionally, Clink recently added the feature of being able to save with other people, which is awesome if you’re planning a road trip with some friends this summer or want to save up with your significant other to buy some patio furniture. Each person is assigned a proportion of the total amount of money that they’re committed to saving. So if it’s a $2000 road trip and there are four friends, each of you saves $500. Everyone gets notifications about how they’re doing, and when the group goal is met, everyone can withdraw their money and pack up the car.

It’s great in theory to get a group of friends together to start saving money towards something, and it seems like low-risk if you’re technically saving separately and the savings is semi-automated. Nobody can go into the account and steal someone else’s money to buy a puppy, and nobody is going to have $0 in their individual account because Clink forces you to put some money away to invest on a regular basis.

But what if someone does the math wrong and doesn’t invest enough in time for the trip? Johnny only works one job, so he could only put in $1 a week, and that wasn’t enough to save up his portion. Does someone cover him? Or is he banned from the trip?

Alternatively, everyone makes their goal, but then someone withdraws their money and uses it to buy a litter of kittens. Do the kittens have to go on the road trip now?

Money is a sensitive issue for a lot of people, and it can be a great idea to save up money with your friends to do something fun all together. But in reality, there are a lot of variables with different people and different attitudes towards money, and money can very easily lead to arguments.

I’m probably not going to use Clink to save money with other people, but it’s nice to know that it’ll be there to help me save money on my own. So when I want to buy that litter of kittens for myself, there’ll be nobody to stop me.