Every other day, some “secret” information is getting plastered all over the Internet. Whether it’s the sordid details of your Ashley Madison account, top-secret government data, or that terrible picture of you doing doing a keg stand (which you don’t actually remember doing), it’s hard to be confident that your secret will actually stay a secret.

Ashley Madison and keg stands aside, what if you need to communicate something truly important and need absolute confidence that it will remain private?

Email isn’t especially secure. Tom Brady is proof that text messages get leaked all the time.

You could communicate everything in person, without ever writing anything down, but nobody’s got time for that.

You could make everyone you interact with sign a nondisclosure agreement…but then you wouldn’t have any friends.

Or you could use Confide.

Confide has developed a desktop software and mobile app that allow the user to send encrypted messages that self-destruct after they’re read.

Yes, just like Mission Impossible – minus the terrorists and Tom Cruise constantly sprinting away from explosions. 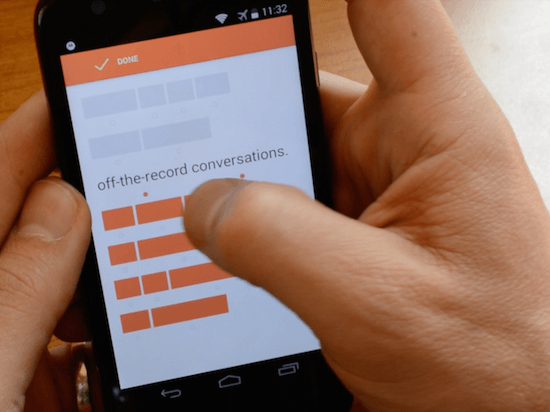 Confide gives users the ability to, “Communicate digitally with the same level of privacy and security as the spoken word.”

Once a message is read, it disappears, meaning it won’t show up on Facebook or Wikileaks or in someone else’s inbox. Screenshots are prevented and messages are encrypted from end-to-end. Even sensitive documents and photos can be sent without fear of them being leaked.

Messages can’t be forwarded and they can’t be archived. Even the members of the Confide team can’t see the messages.

Privacy is a big deal these days, and with the advent of social media, it’s hard to feel like anything is truly private. Even emails or text messages marked “Confidential” can easily end up being given to the wrong person.

Confide wants to take back privacy. They want to make it possible to have a digital conversation that’s just as secure as a regular conversation.

Given that Confide recently raised $1.9 million in seed money, it seems like they might be on to something.