Today, Americans are experiencing an epidemic of obesity with the average American drinking approximately 42 gallons of sweetened beverages each year. While it’s easy to say drinking more water instead of soda is the solution, one of the biggest pitfalls is that water alone is a boring drink.

The makers of The Right Cup are looking to change that by using a combination of scent and taste; The Right Cup tricks users into thinking they’re drinking flavored water from this flavor cup. While the tongue only can taste five sensations (sweet, bitter, sour, salty and umami), the sense of smell is responsible for 80% of the flavor experience. This science is why when your nose is stuffed, you’re unable to taste much of anything.

“We all know that sugary carbonated beverages have been a huge factor in the obesity epidemic, and many people try to stop drinking soda, but it’s hard to transition away from it.  We aim for our cup to help people stay away from the beverages that do more harm than good.” – Isaac Lavi, Co-Founder, and CEO of The Right Cup.

For those concerned about safety, it’s worth noting that The Right Cup uses FDA approved aromatic fruit flavors which are the same as those used by beverage companies in their drinks. The flavor cup is designed to position the nose right over the opening, so the nose picks up the fruit aroma while the tongue detects a sweet taste. This combination of sensations tricks the brain into thinking that it’s tasting flavored water. 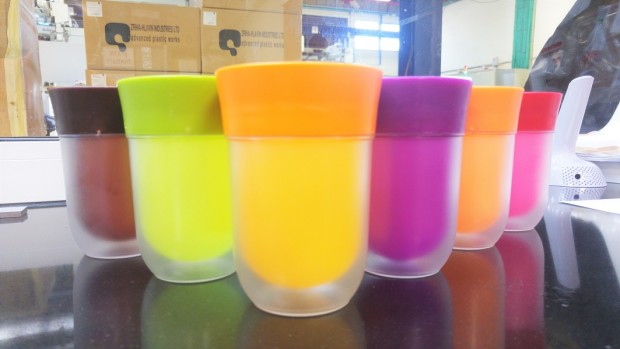 The flavor cup comes in a variety of flavors including orange, mixed berry, cola (suggested to be used with carbonated water), grapes, apple, and peach. So far the makers of The Right Cup have raised over $1.5 million via crowdfunding which is 864% of their $50,000 funding goal. Pricing for the device starts at $29 which is 22% off the suggested retail price.

It’s worth noting that the aroma inside the cup will degrade after being removed from the packaging, which is why it’s recommended to store the cup upside down after opening and after washing when dry. In ideal conditions, the aroma taste effect can last up to several months. Additionally, hot water can cause the flavor to degrade faster.