You might want to have your workers’ comp insurer to look away for a moment while you take a peek at what some enterprising Brits are up to across the pond. DeskBeers is the brainchild of Adam Rogers and Steve Marshall, who have established a business bringing the frothy goodness of delicious craft beer to offices all over the UK. After a year of incubation in Mint Digital, the company raised nearly $200,000 in crowdfunding and successfully spun out on its own in March.

The DeskBeers model is essentially the same as most other subscription-based delivery services. You pay a flat monthly rate and select your delivery frequency and voila, the beers literally start flowing. For those who aren’t sure they want a regular delivery or just want some refreshments for a special office party, they also offer a one-off option that doesn’t require a subscription. The DeskBeers team selects an assortment of beers for each delivery from a wide range of craft breweries, so each shipment is a surprise. Wine and cider lovers are out of luck at the moment, but the company plans on opening up the beverage choices down the road. 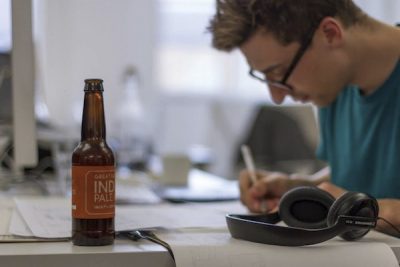 Among their clientele, DeskBeers occasionally delivers shipments to Steer, an immersive code school conducted with live tracks spanning about a week. Steer explains how the service integrates with their campus environment,

“DeskBeers fits nicely into it because it’s more of a personal touch than just getting regular beer. I also think that in the tech industry, we take a lot of crazy ideas for granted. But when you’re new to the scene like a lot of our students are, it can be pretty inspiring to see that an entire business can be built around such a simple idea as weekly beer deliveries.”

The DeskBeer shipment gives Steer a great way to celebrate and acknowledge the hard work everyone puts in at the conclusion of the track. It also allows staff and students to interact in a more social setting, which can be a great way for them to forge stronger bonds with one another as potential peers in the tech industry 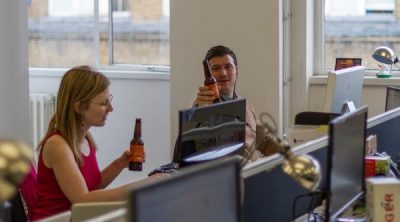 The concept seems to be right in line with the tech startup sub-culture, so it’s not hard to see why they have been so successful. It’s too bad the service is only available in the UK though. However, if something like this were to make it to U.S. shores, it may face some significant challenges. In particular, the propensity for litigation in the States and the current high cost of workers’ comp insurance. The financial consequences of a misstep would be dire, especially for fledgling companies running on the edge of insolvency. Hence, at least for now, we’ll have to do our drinking the good old fashioned American way, in the parking lot with a concealed crotch-flask.

Equity Funding Raised on Crowdcube with a total of 184 Investors.