IFPI reports that digital music currently accounts for half of all revenue being generated by the music industry. The biggest driver of digital’s growth over the past few years? Streaming music. Of the $7.8 billion in digital revenue, streaming is responsible for 59% of it.

As with the digitization of everything else in our world, there now comes a need to work better, faster, and smarter. The music industry is experiencing a massive change in the delivery of their product; namely, through streaming audio channels around the web. But as artists’ music get distributed by sites like YouTube, Spotify, Pandora, and Apple, how do they properly manage the financial piece of going digital?

A FinTech Solution for the Music Industry

“In a world where Venmo exists, why isn’t there a Venmo for Apple and Spotify?” Stem co-founder Milana Rabkin asked. It’s an interesting question and one that her company Stem has sought to answer.

Founded in 2015, Stem is a payment distribution software built for musical artists and other creatives that sell content on streaming channels. 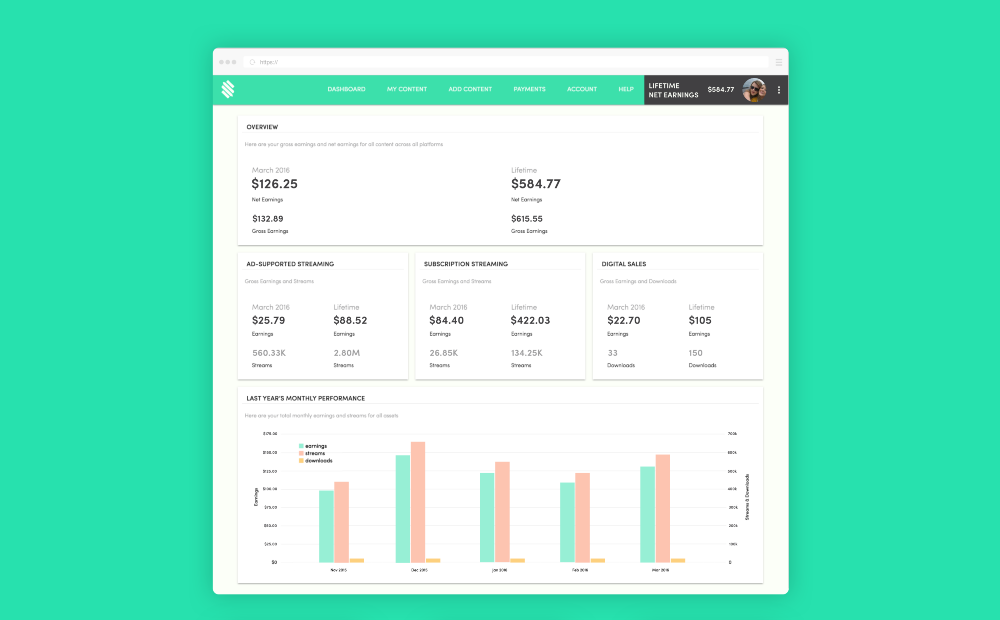 Co-founders Jovin Cronin-Wilesmith, Tim Luckow, and Rabkin came up with the idea after realizing that there wasn’t a solution that integrated with the streaming platforms that artists use. It wasn’t like they could plug their PayPal account or traditional financial management software into Spotify, Amazon, and YouTube, and then manage their revenue from each all in one place. Selling music to a digital audience was supposed to be easy, but there was nothing easy about the backend revenue management—especially when multiple parties got involved.

So this is why Stem entered the picture. They now enable artists to use their software as a one-stop-shop where they can upload their digital content, link up their preferred streaming platforms, connect their payment account, and generate contracts for collaborators. It’s this last piece that Stem puts a heavy emphasis on. Rabkin explained:

“When you upload content to Stem, we mandate you to have a conversation with your collaborators and agree on revenue splits before we officially release the content. We were shocked to see that few other platforms are based on a consensus model, which means that artists often don’t agree upfront about who owns what.”

In addition to making the process of paying collaborators less painful, Stem also empowers artists to take full control over their work. The artists can sell what they want, where they want, and for how much they want. They create the contracts, distribute the music, and don’t have to worry about who’s taking a cut of the revenue behind the scenes. They also now have the ability to learn more about who their audience is and what their preferences are. It’s all fully transparent from the Stem dashboard, and all they require in exchange is 5%.

Stem has received a lot of attention lately what with another round of funding coming in. Back in 2015 when they launched in beta, Mark Cuban led the initial seed round. In 2016, that was following up by their first official round of funding from Upfront Ventures, a number of bigwigs in music management, as well as Gary Vaynerchuk. Funding in that round totaled $4.5 million. Now, in 2017, Stem has raised $8 million in Series A funding, this round led by Aspect Ventures and Evolution Media.

And Stem isn’t just popping up in the spotlight because of funding either. There are a number of notable artists that have come forward to speak up on Stem’s behalf and what the platform has been able to do for them.

DJ Jazzy Jeff used it for his latest release: “It was the perfect slam dunk: we cut up the revenue pie evenly and easily without any transparency issues so that we could just focus on our creativity. Three days after we finished the album, it was up on every major platform, and now I know exactly how much money I’m making from it.”

Kendrick Lamar-collaborator Anna Wise, Deadmau5, and Childish Gambino have all acknowledged using the platform as well.

Of course, Stem isn’t the first company to have thought of this idea.

The idea that musical artists need a better, smarter way to manage their digital revenue makes sense. So much emphasis is put on the entrepreneur to automate processes and invest in cheap cloud-based software to improve their business’s bottom line. How are musical artists any different? At this point, it’s just a matter of waiting to see how much interest Stem and their competitors generate from big-name acts since that’ll most likely decide which of these companies thrive and survive.