Judging a book by its cover isn’t considered conventionally wise, but maybe there’s merit to the idea that external features betray inward secrets. Faception is an Israeli startup that uses facial analysis combined with computer vision and machine learning to analyze images of people to predict some of their key personality traits – and they do it with surprising accuracy.

Physiognomy – the study of personality based on a external features – has been plagued by pseudo-scientific methods in the past. Lately, however, there have been sound studies which show that there may be a connection between certain facial features and personality traits after all.

For example, studies have shown that there is a correlation between the achievement drive of American presidents and the ratio of the width-to-height ratio of their faces. There are also important commercial applications of facial analysis; cues derived from the facial features of CEOs have been shown to be trustworthy indicators of future company performance. Faception uses similar scientific studies and research as the basis for the conclusions it drives with its software.

Accounting for the possibility that the results of certain studies may be contentious, the team behind Faception constantly puts their product through rigorous testing.

In the wake of the Paris terrorist attacks in November 2015, Faception conducted an internal study to see if its software could identify terrorists from an input sample containing images of people from all walks of life. The software classified nine of the 11 terrorists correctly; only three of them had a criminal record previously. 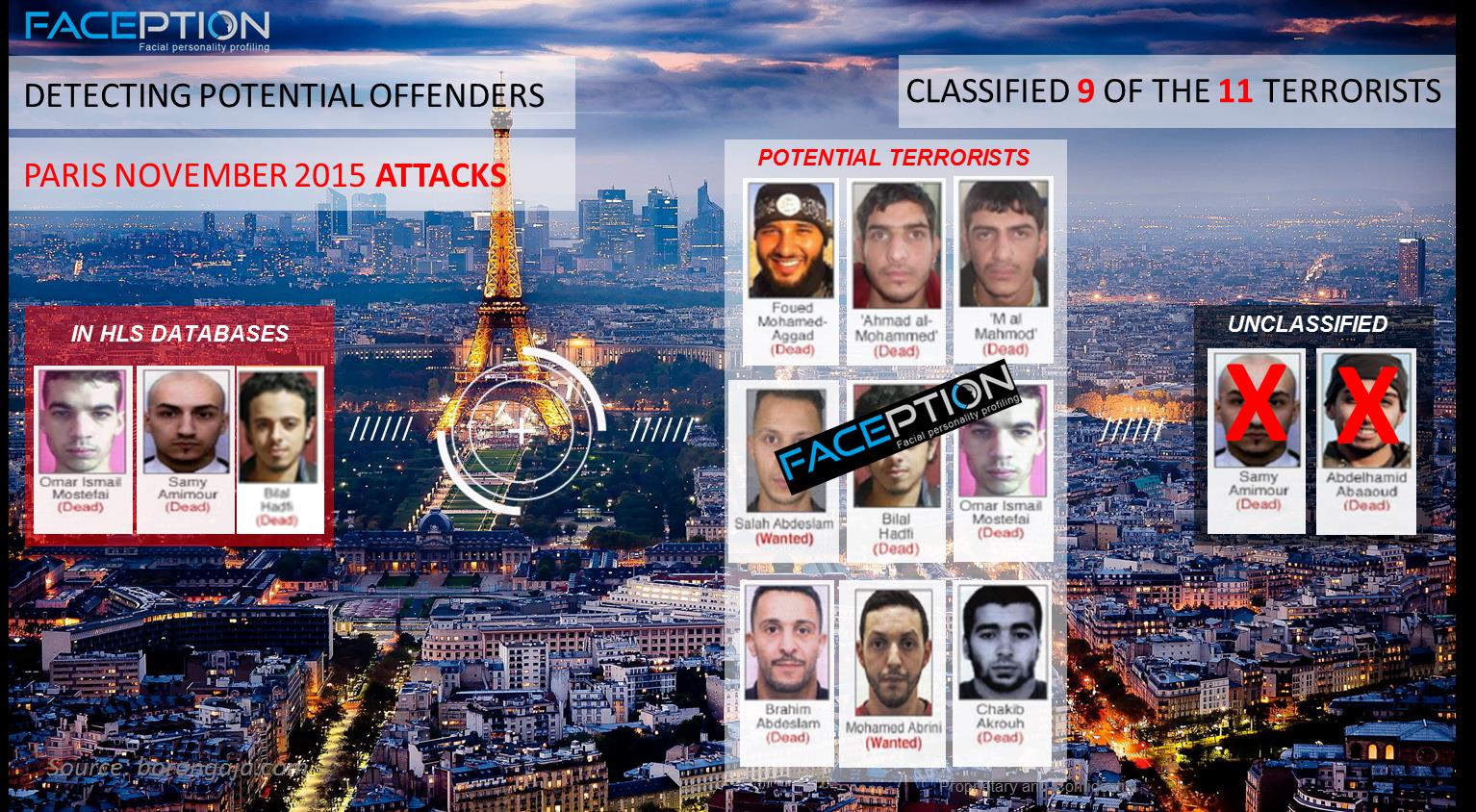 As part of the application process to 500 Startups, Faception was tasked with identifying poker players from a large database of images. The software was able to recognize 25 of the 27 poker players whose images were in the database – a 93% accuracy rate.

In yet another examination of its abilities, Faception was able to correctly pick four of the seven players who made it to the final table of a poker tournament; it was even able to predict two of the final three players in a competition that started off with 50 participants.

For each of the people groups that need to be identified, the team behind Faception develops what they call, “classifiers”: a particular set of facial features that is consistent with the members of each group. They arrive at these classifiers by studying images of people known to be members of those groups, and identifying recurring attributes in their facial features. Once they find features that are a motif, they run images or video streams of general populations through the software to study for those attributes.

Faception has been able to identify groups such as high IQ individuals, academic researchers, MMA fighters, and white-collar offenders with over 80% accuracy. The applications of the facial personality profiling software are vast and varied.

The company has licensed a high-performance age and gender classifier for the audience measurement purposes of a digital signage company. They’ve also signed a deal valued at more than $750K with a leading homeland security agency.

Its makers see the possibility of Faception being used for all kinds of other things: inform decision-making in recruiting, enabling market research, targeted advertising in retail, helping drive progress in artificial intelligence by having robots that can study people’s faces in real-time, and so on.

Faception turned to 500 Startups to help speed up their entry into those domains. The originality of the product and a strong performance through the application process helped them book a spot in the accelerator’s Batch 16. The startup has raised $125K in seed funding so far, and will use 500 Startups’ Demo Day (May 13th) to further attract the attention of investors.