Those of us lucky enough to have dependable access to potable water don’t consume nearly enough of it. According to one survey, two-third of Americans fail to drink the stipulated 8-12 cups (variable based on weight/activity levels) required by the body on a daily basis. Flavour Bottle is hoping to encourage good hydration habits with a little sleight of hand and trickery of the nose.

The bottle bases its magic on the assumption that we would all drink a lot more water if it tasted like soda or juice. At the same time, we wouldn’t want to expose our bodies to the preservatives and other additives that those beverages carry. Working within those parameters, the creators came up with a way to imbue regular water with the illusion of flavor. How did they do that? By adding scents to the lids. So when you bring the bottle up to your mouth for a sip, your olfactory system tricks the brain into believing you’re drinking something sweet rather than something bland. The joke’s on you, but that’s okay.

Flavour Bottle’s lids come in five flavors: Grape, Strawberry, Orange, Watermelon, and Cola. Using a patented process, scents representing those flavors are infused directly into the silicone spout. The scents last up to a year depending on the frequency of usage, after which you will have to purchase a new lid to keep up the ruse. The bottles have a cap that serves to prevent the fragrance from diffusing too rapidly. 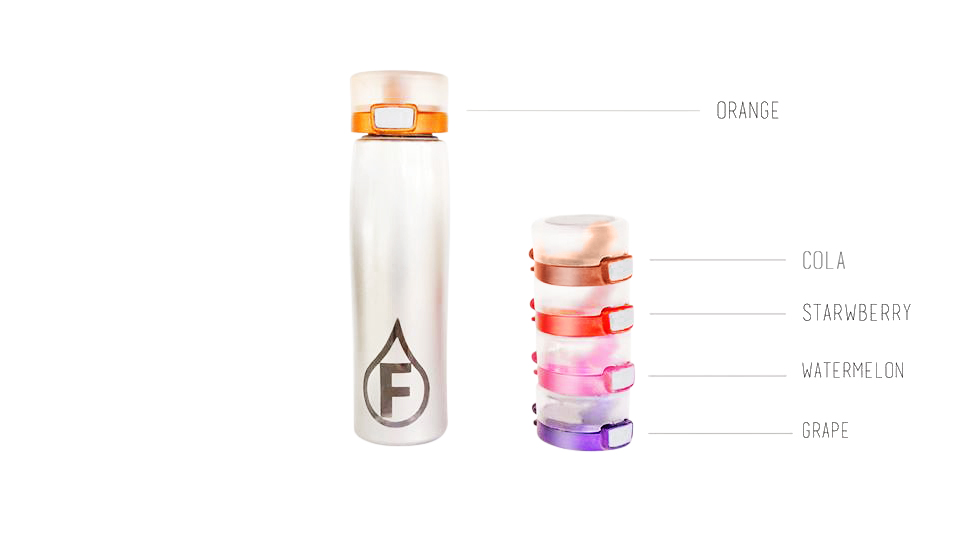 Although implemented slightly differently, there has been another crowdfunded project that adopted the same modus operandi as Flavour Bottle. It’s called The Right Cup, and it uses FDA-approved fruit flavoring to lend imaginary flavor. The flavoring is not mixed with the water, of course; it’s infused into the material out of which the cup is made. Five flavors were launched initially: Apple, Cola, Orange, Mixed Berry, and Peach. The Right Cup made all the right moves on Indiegogo, and completed its campaign having collected over $1.3 million.

Flavour Bottle is looking to have its own successful crowdfunding run. The Kickstarter campaign is live and has managed to rake in $13,000 so far; the goal amount is $30,000. The early bird edition pledges are priced $20, which gets you one Flavour Bottle with one lid. Additional lids are priced $10 each. It’s an ‘All or nothing’ campaign, so the project will only receive funds if the goal is reached by March 17. In case you would like to add a few drops to the funding ocean, you can do so on Flavour Bottle’s Kickstarter page here.