Email has come a long way since its humble beginnings, but not all the modifications made to it along the way have been valuable. Navigating the mishmash of folders, labels, archives, and tabs while trying to preserve a train of thought is every working professional’s 8 AM nightmare. The onerous logistics is only one aspect of the problem; it turns out that email is also notorious for being rather emotionally taxing.

In a survey conducted by Sendmail Inc., 43% of participants responded saying email is the communication medium most likely to cause resentment. 64% had sent or received mails that had resulted in unmeant confusion or anger. While that explains the abundance of email etiquette courses online, there are some startups looking to provide a simpler (and duh, more automated) solution to the problem.

FoxType offers web-based software that helps people write “better” emails. The team wants to get around to dealing with all of the malaises that plague our e-communications, but currently the tool focuses on parsing the language in emails to gauge for politeness, and offers more genteel and friendly alternatives to phrases and words it deems disagreeable or perhaps too harsh.

The politeness checker has been bundled into a Gmail extension which pops up every time a compose box is opened. Along with the phrase suggestions, the extension displays the reading time of the email (which you should keep as low as you can as often as you can), and an overall politeness score.

On the FoxType website, there’s a tool which rates the tone of entered text and gives a detailed analysis of what constitutes polite and impolite verbiage. Co-founder Scott Li tells us one feature that’s in the works is a web editor (like Google Docs) that also makes your writing more concise. 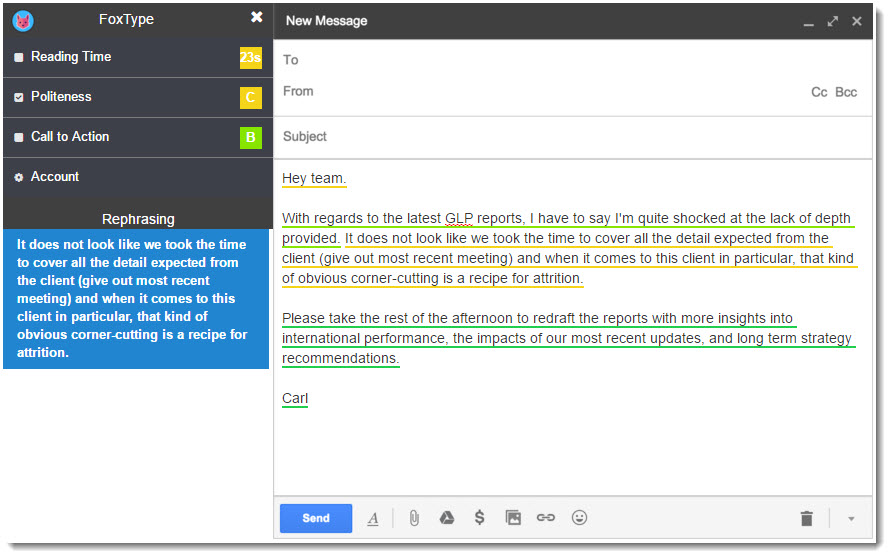 Behind FoxType’s cultured language suggestions is a machine learning algorithm developed from the principles of Politeness Theory. The theory emerged in the late 1980s as a way to enhance social skills and ensure harmony in social interactions.

FoxType addresses an oft overlooked source of email heartache, but the software is still a work in progress. The suggestions offered can be entirely unrelated to the source text at times. Also, its judgement of what comprises polite or impolite text may not always be relevant.

The software flags legitimate etiquette violations such as vulgar language and negative words, but also considers practices such as referring to the reader using the words “you, your, or you’re”, or writing in the first person as impolite, which is generally considered kosher in most contexts. The software also seems to lack strength when evaluating and making recommendations for overall sentence composition.

That said, the software is constantly improving thanks to its machine learning underpinnings, and there is certainly no shortage of people who would say, “Ya, I could use help being nicer over email.” The startup will have a chance to enhance the product further through its time at 500 Startups, where it has been accepted as part of the Batch 16 cohort. Li says that the startup’s time in the incubator will be used to expand their network and validate the many new features that are on the anvil.