GiveSafe is a new, innovative solution that combines both software and hardware, and both technology and human touch to support the homeless. The project aims to give people in need both the financial resources they require in the present, as well as the relational guidance that points them towards a more secure future. It is a refreshing example of technology truly bringing people closer to one another, and hopefully closer to health and happiness.

There are three main players involved in the GiveSafe process. The first are the displaced, who are are at the center of the project’s efforts. GiveSafe partners up with volunteers and outreach workers who identify people in need. It’s also possible for those in rough situations to directly contact the nonprofits associated with the project. Once they’ve been identified, the individuals are given beacons—devices about the size of a coin—that broadcast a continuous low-energy radio signal. These signals can be detected via Bluetooth over a distance between 10 and 20 yards.

Charitable citygoers are the second piece to the GiveSafe process. The GiveSafe app on Android or iOS notifies users when they’re in the vicinity of someone who could use their help; it does so by communicating with the Bluetooth beacons handed out. When the notification pops up, app users are given the option of making a contribution to the homeless person with whom they’re in close proximity. Transactions are processed through BrainTree, a PayPal subsidiary. 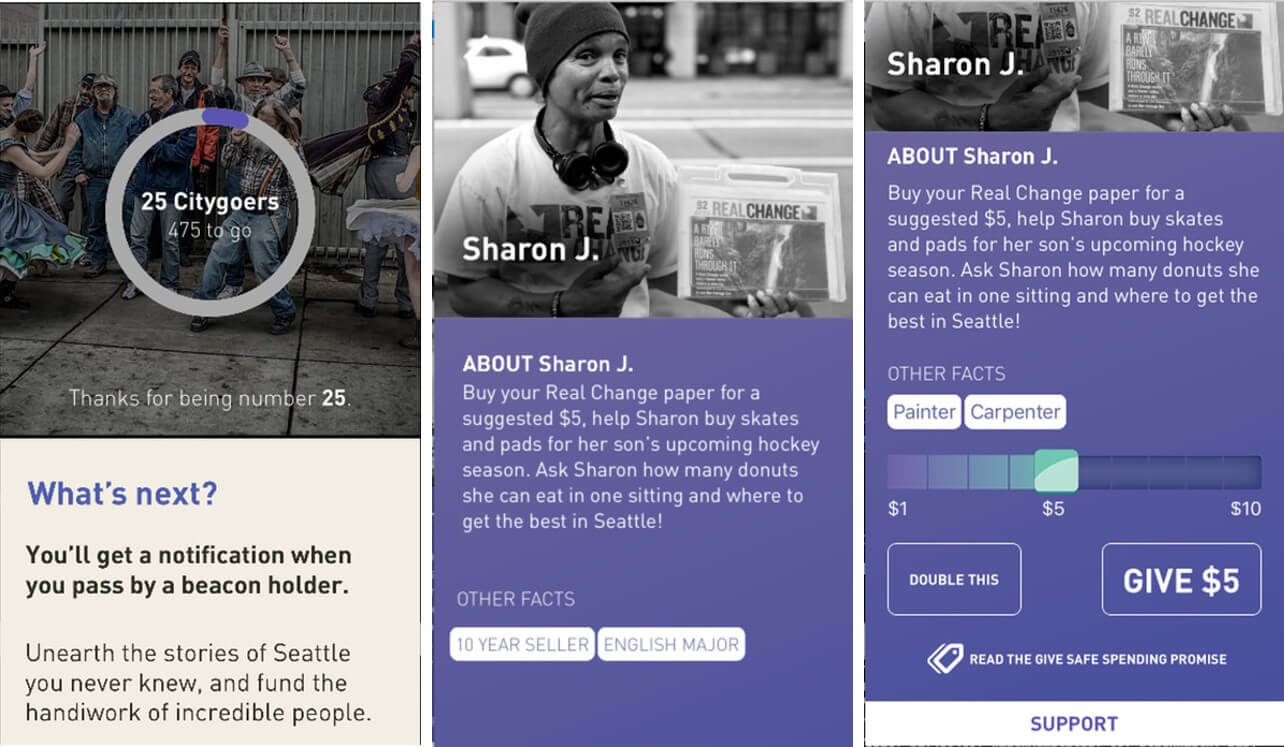 All the contributions made to a particular beacon holder are recorded on the device. They can spend the amount accrued through donations by approaching a nonprofit* or merchant partnered with GiveSafe. These merchants and nonprofits can be located using a map provided when the beacons are issued. Beacon holders can currently check their balance at any establishment partnered with the project; an SMS alert option for checking the balance is in the works.

Merchants also have a version of the GiveSafe app. They can use it to view the available balance on a beacon, and deduct an amount equal to the cost of a product or service purchased by the displaced individual. GiveSafe tracks the amount redeemed at each establishment and then reimburses them each month (the money is stored within the GiveSafe system).

Merchants currently partnered with the projects are La Bodega Restaurants, Queen Bee Coffeehouses, METRO, Colman Barbers, GR8Gear, The Sea Sha Inn, and Andrea Cole Job Consulting. If an individual requires something not provided by these merchants, they can contact the counselor assigned to them, who will charge the beacon and in turn contact the GiveSafe team to arrange the service.

What stands out about GiveSafe’s approach is that it’s not just about charity, but also upliftment. All the beacons are deactivated on a monthly basis and reactivated only when their owners drop in at one of the partnered nonprofits. This is to ensure that the individuals involved in the project receive not just money, but also enriching interpersonal interactions.

GiveSafe also encourages the people it helps to interact with those who make donations via the app. One way it does this is by creating a profile for each beacon holder, which contains a bit of their background and story. The proximity-based alerts app-users receive display this information, which GiveSafe hopes will serve as fodder for conversation. Additionally, bi-monthly meetups are organized in an effort to bring together homeless individuals, contributors, and others who play a part in the project.

GiveSafe’s pilot run is currently ongoing in Seattle. It plans to empower 200 homeless individuals in the city by Christmas this year. Apart from downloading the app, those in the area can chip in by applying to volunteer on the organization’s website.