Going off the grid is something we’d all like to do every now and then. That said, being in a spot where you’re unable to at least text somebody in a sticky situation may be taking the digital detox a little too far for some of us. Addressing this conundrum, GoTenna has developed a way to stray far enough away from civilization that you lose cell service, but still have the option of sending text messages and sharing your location with other smartphone users if the need arises.

The GoTenna is a sleek 1.8-ounce device powered by a rechargeable lithium polymer battery that lasts over a day on standby. It has a micro-USB port on one end so you can charge it easily and an extendable antenna on the other. The GoTenna’s ubiquitous communication capabilities come courtesy of a 2-watt VHF (very high frequency) radio transceiver. A Bluetooth low energy chip allows the device to connect to your phone.

GoTenna is able to take over where your phone’s messaging capabilities give out because it establishes ad-hoc networks with other GoTenna units in the vicinity. Mobile or cellular networks require a central base station to mediate interaction between nodes (phones, in this case) – this is why we need to be within range of a cell tower to make calls or send texts. Ad-hoc networks, on the other hand, allow nodes to communicate with each other directly, so GoTenna uses radio transceivers to make their devices do just that.

GoTenna’s interaction with smartphones is facilitated by an app that’s available on Android and iOS. Once you have the app installed on your phone and your GoTenna within about 20 feet of it, you will be able to text anybody who also has the device paired with their smartphone.

The creators claim the device has a 4-mile range, with communication distance being a function of elevation and terrain – even strapping it onto the top of your backpack instead of your pocket can enhance its reach. You will know if a particular user is within your range if a green checkmark shows up when you ping them.

Messages of up to 160 characters can only be sent using the GoTenna app to others who also have the device on them – and yes, emojis are supported. Users are identifiable by their goTenna ID (GID); it’s advisable you set as your GID as your phone numbers.

Users also have the ability to share their location on a map or request to view their contacts’ locations; the free offline maps are available to download through the app. By default, location information is always routed to the individuals or groups with whom users have chosen to share that data. Additionally, there’s a “Shout” option which lets users broadcast a message to all GoTenna devices within range. 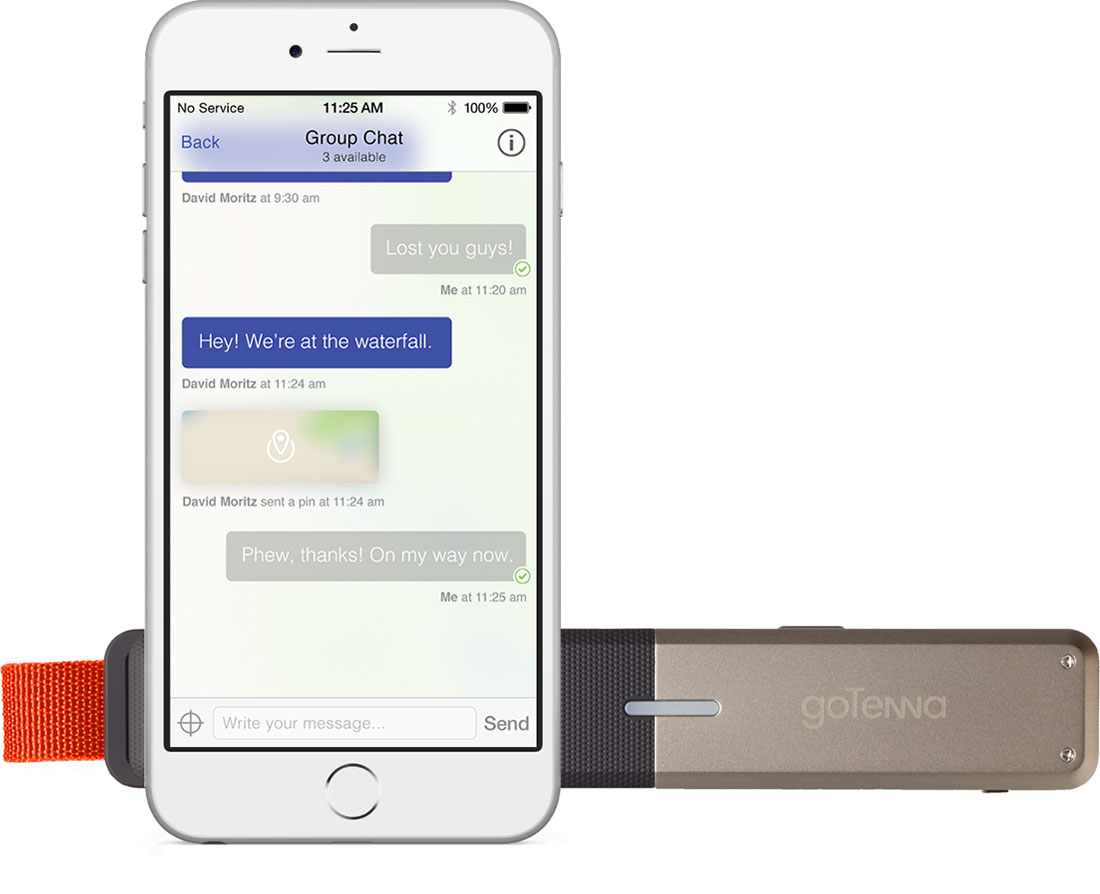 Given its minimal messaging features and accessibility, GoTenna is especially useful to hikers, snowboarders, climbers etc. who may want to send out an SOS along with their current location during an emergency

GoTennas sell in pairs (since owning just one doesn’t make sense) at $199; family packs of four sell at $389.

The startup, founded by Daniela and Jorge Perdomo, raised $7.5 million at the beginning of this month, after having raised $1.8 million back in December of 2013. The recent Series A funding round was accompanied by news of a partnership with outdoor equipment chain REI; GoTenna will launch its retail sales in an exclusive partnership with REI. The founders have said that the funds they’ve raised will be used to expand their 13-person team.