When I was a kid, my dad always had his camera with him, photographing and recording all the big moments in our family’s life. As cameras got smaller, and subsequently ended up in our cell phones, more and more people were doing just that: recording every moment in their lives, trying to both experience the moment and capture it for posterity. According to research from Victoria University of Wellington in New Zealand, though, it’s impossible for people to be photographing a moment while experiencing it to the fullest extent.

In 2012, co-founder Sam Ulu was thinking a lot about collaboration and the evolution of the sharing economy; “I thought, ‘how can you empower people to do something they’re passionate about?’”

At the same time, he was inspired by a friend who was a wedding photographer. She had started doing smaller events in her free time, including a child’s birthday party. Soon she had parents asking her to photograph birthday parties all the time, and she was making good money. Ulu also realized that with the evolution of the selfie, people were becoming very interested in being part of the memory.

So, with Ulu’s expertise as an engineer and the photography expertise of co-founder Maria Walley, the two began Kandid.ly as a marketplace of photographers for everyday life. 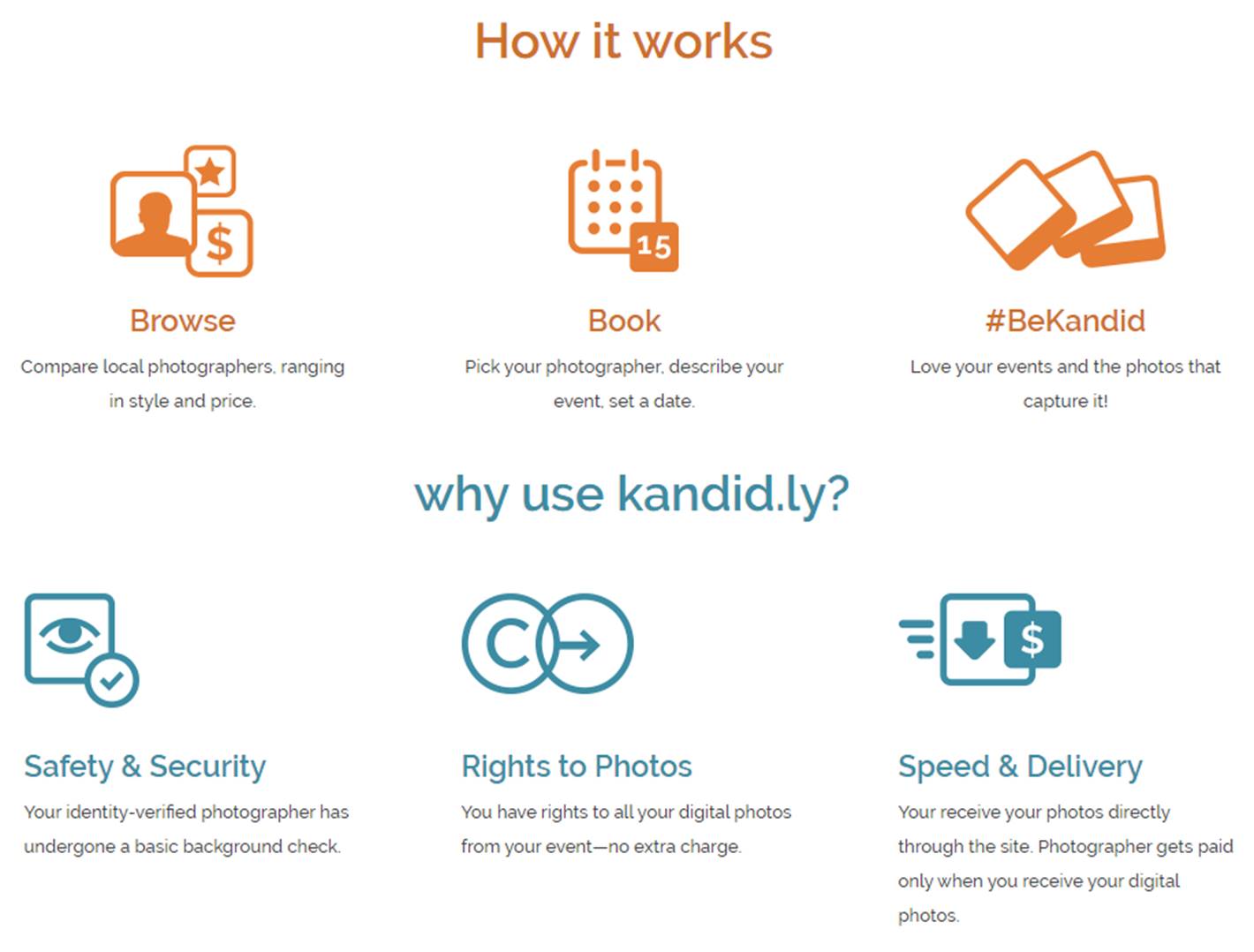 One thing that makes Kandid.ly stand out from the competition, Ulu says, is that they don’t do weddings – Kandid.ly is about more intimate, everyday settings, such as birthday parties, nights out on the town, or just general personal paparazzi. Additionally, few of the Kandid.ly photographers are full-time “professionals”, but instead semi-pro photography “enthusiasts”.

“Think of them as Uber drivers,” Ulu said. “They have a 9 to 5 job, but they’re passionate about photography, so they earn some money on the side.”

There are a few additional similarities between the two companies. Both Kandid.ly and Uber found large industries ripe for strategic growth, new technology and better price points. Additionally, becoming a Kandid.ly photographer is “a lot like becoming an Uber driver,” said Ulu; there’s a review process, including a background check, and review of sample photos before a photographer receives a Kandid.ly t-shirt to wear at events and cards to distribute for customers to see their photos.

Ulu said Kandid.ly is “creating the demand” instead of trying to supply something that people know they want.

“We’re not just trying to be a photography service,” he said. “We’re trying to make a new market.”

A photographer for a night out or a neighborhood barbecue might not be something you think you need at first, but when you compare the quality of a selfie to the images of a talented amateur photographer, there’s no doubt of its necessity, according to Ulu.

“In this highly visual age, photography has never been more prolific,” co-founder Walley said in a press release. “Yet, booking a photographer for an event that deserves more than a low-quality ‘selfie’ is far more complex than it needs to be. We’re fixing this.”

Kandid.ly currently has a four-person team and is in select cities, but Ulu said he hopes to grow the team and expand to more markets soon. Currently, Kandid.ly is part of the exclusive Techstars accelerator class of 2016 based in Austin, Texas. Upon completion of the program, their big “Demo Day” is on May 19th. They’re definitely going to want some shots of that.