Looking for new ways to take your drinking experiences to the next level? Looking for something a little extra to help literally lift your spirits? If so, you’ll be happy to know that as of today, the Levitating CUP, a floating cocktail glass, has officially cleared its Kickstarter goal, raising almost $60K on its $50K goal. With the funding, the company plans to start pouring out product to consumers in October.

The Levitating CUP is the world’s first gravity-defying drinkware. It’s also engineered to be spill resistant so that you can walk with the base unit and filled cocktail glass with no more than the standard risk of spilling a drop.

This levitation is made possible through electromagnetic suspension & quantum locking (we’re talking about drinking so we won’t get into the details, technology that has yet to make a big break into consumer goods—especially in the form of an entirely wireless base unit.

The Levitating CUP is really two products: the base and the cocktail glass. A wired base, during the crowdfunding campaign, was running for $89, while it cost only $99 for a wireless one. For users who also want to purchase a glass along with the base, combo-pricing was $139 and $149 for wired vs wireless respectively.

Unfortunately, not just any glass can be used; you’ll need to be drinking from something that has a large magnet on its base. Or, if you’re feeling green, you could also use the device to levitate a plant; the base is compatible with the Air Bonsai and Lyfe…

But what about the part before you pour your drink? Well, Joe Paglioni, the guy behind the Levitating CUP, also has a nifty new way to “age” your alcohol. As of this past February, the Oak Bottle cleared its Indiegogo campaign by 370%, raising just over $115,000. It’s the first “for-home-use” barrel-aging vessel, and it takes up way less room than a barrel.

Within the device is a patent-pending design that maximizes the amount of oak surface area with which the liquid comes in contact. This accelerates the oak aging process naturally. Unlike oak chips, oak spirals and oak barrels, the Oak Bottle works in as little as 2 to 48 hours. Mathematically, Oak Bottle is 60 times faster than a typical oak barrel. Just like traditional oak barrels, Oak Bottle allows a very slow introduction of oxygen into the wine or spirit (aka “micro-oxygenation”); and it imparts the character of the wood into the liquid through surface contact absorption and extraction. 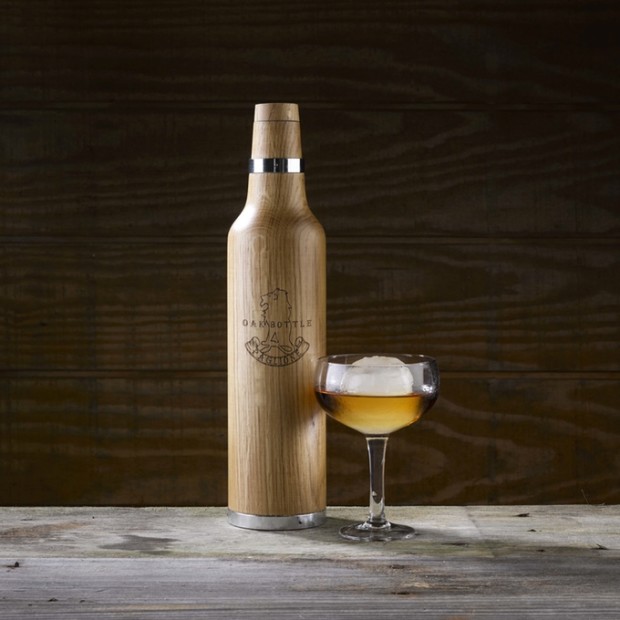 Aside from the aging speed, what sets the device apart from traditional barrels is the fact it’s made from a single piece of oak. This means the flavor is much more consistent than that from barrels which are made from multiple pieces of wood.

So, fancy a drink? Of course you do…