Have you ever seen someone wearing a really great outfit and wondered where they got it from, but couldn’t work up the courage to walk up to them and ask before they disappeared into the mist forever? Then you are going to love the new app from JustVisual called LikeThat Style. This app uses visual recognition software to take any photo and matches the clothing to online products from a variety of retailers. 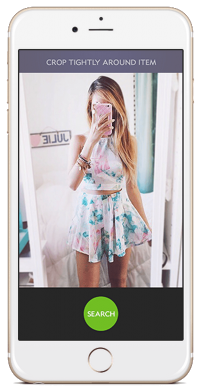 LikeThat Style is the latest app in JustVisual’s visual recognition stable. Building on the success of their other projects, they’ve refined the accuracy of the software to identify matches and improved the UX to be smooth and easy to use. The app is relatively straightforward and has 3 basic steps:

The app will sift through its vast catalog of over 10 million items and present you with its matches. The catalog was created by crawling hundreds of online retailer sites and is currently focused on women’s clothing and apparel, which includes dresses, pants, tops and even shoes and accessories. However, it wouldn’t be a surprise to see a men’s version of the app come along down the road. Beyond finding identical matches, the app also presents the user with similar styles. In conjunction with pricing information and links to those online stores, bargain hunting has never been easier.

The app was listed on Product Hunt on Wednesday and picked up nearly 200 upvotes in less than 24 hours and the initial feedback from early adopters has been positive. The app is available for free on both iOS and Android mobile devices and can be found in their respective app stores. JustVisual has also produced similar apps for other genres, like Decor, Garden and Pets.