Now that Cruise just raised $12.5 million in Series A funding from Sam Altman and Spark Capital, sooner than later they might be the stuff of everyone.

Cruise’s CEO Kyle Vogt, one of the founders of Justin.tv, Socialcam, and Twitch, has built a team of MIT engineers and roboticists who are hellbent on bringing self-driving cars to the masses. Here’s the real kicker: unlike Google, who has been focusing on building entire cars that are self-driving, Cruise is designed to turn your existing car into a self-driving KITT that would make David Hasselhoff himself jealous!

Well, not exactly, but they’re headed in that direction.

At the moment, Cruise can make your existing car self-driving only if have an Audi A4s or S4s. And your car doesn’t become self-driving in the true “autopilot” sense. The Cruise system takes control of the steering, braking, and acceleration necessary to keep you in your highway lane, but you still need to stay alert to ensure that you’re obeying all traffic laws. It’s not like you can turn on Cruise, then kick your shoes off and take a nap. It’s probably more accurate to say that Cruise is a safer, ultra-sophisticated “cruise control” system. 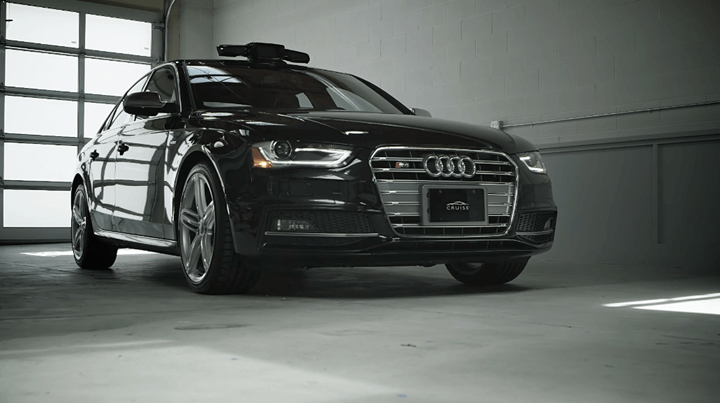 A sensor pod mounted on top of the car uses camera, radars, and other measurements to monitor the road and surrounding cars. A series of actuators controls the steering and driving. A small computer mounted in the trunk performs the calculations necessary to keep you safe as you’re driving.

The technology isn’t cheap, costing around $10,000, but this is clearly the direction the auto industry is headed, with Mercedes already offering Steering Assist features on some of their vehicles and Google promising a fully automated car some years in the future.

Cruise falls somewhere in the middle, giving users more than Mercedes offers much sooner than Google.

The time is also right from a technology perspective. Vogt, an MIT grad himself, speaks of the work he did on automated vehicles while in school:

The computation systems for self-driving cars were large and bulky when I worked on AV in 2004. We would have 10 servers and a rack in the back of a pick-up truck. But that kind of power is now available in your cell phone.

But if Cruise is going to receive widespread acceptance, it’s going to have to clear some significant hurdles. The legality of automated driving is still somewhat murky, with Vogt calling the regulations a “moving target” that Cruise will always have to chase.

Audi isn’t exactly thrilled with having their cars modified either. According to an Audi representative, “Audi of America does not support or condone the modification of its vehicles by third parties for this or other purposes.”

Despite the roadblocks, if Cruise technology lives up to Vogt’s promises and evolves to the point where it can work on almost any vehicle, catching green lights may not prove too difficult.