That’s the fascinating question that spurred Steven Woods and Paul Teshima on to their next project after Eloqua, a marketing automation platform that was acquired by Oracle for $871 million. “We saw the world of marketing evolve to become more data driven, but there was no way for an individual to measure and manage all of their own relationships in the same way,” says Woods. There was clearly a technological gap in how companies approached sales and networking, and that’s where Nudge comes in.

The platform is all about human relationships, but it is an artificial intelligence that does all the heavy lifting behind the scenes. It starts by parsing the networks you connect to it (social media accounts, CRMs, emails, etc.) to get an idea of the people with whom you might like to form business connections.

The software then begins to chalk out a “connection graph” which quantifies the strength of relationships with a particular connection. It also keeps track of the activity around an individual such as leadership changes in their company or acquisitions. The idea is to find the most organic, trusted channels using which people can build networks and drive sales.

Nudge does its best to take into account the vagaries of relationships in the real world. The simplest way in which it recognizes a relationship is by looking at email exchanges and social media activity. At a more advanced level, it tracks the attrition or strengthening that relationships undergo based on the frequency of interactions and nature of communication between millions of individuals. According to Woods, that information is “insanely valuable as you start to see how the social graph affects the buyers you want to connect with.”

The central role of Nudge’s AI, though, is to strengthen relationships–not just measure them. “We do a tremendous amount of AI-based research on each of your relationships and the accounts you care about in order to find out what is going on with them that might give you an opening to start or re-start, a conversation,” Woods explains. 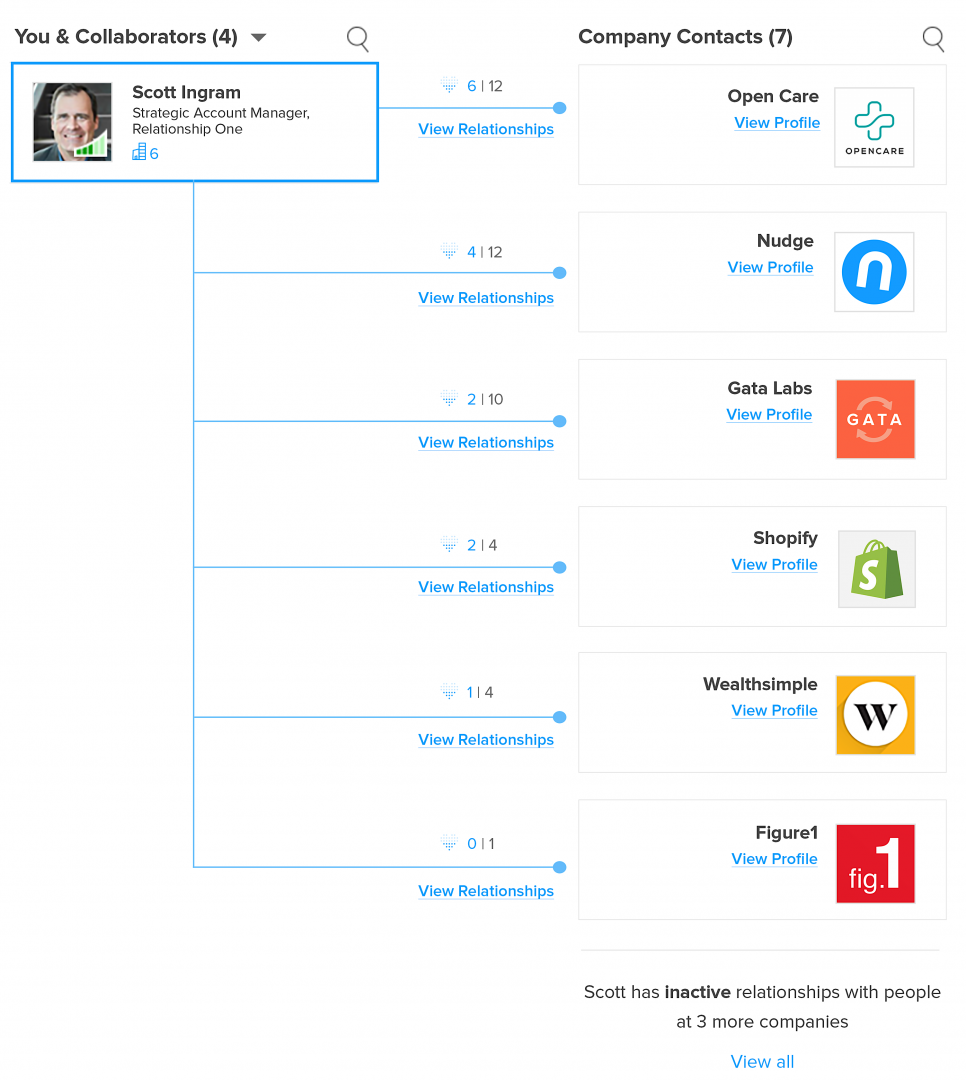 Once Nudge gives you an “in” with an individual, it leaves the process of breaking the ice to you. “While we believe that AI can do a tremendous job on the research, we don’t feel that true, trust-based relationships can be built by a robot on your behalf,” Woods says. That approach is in contrast to other AI-powered services like Conversica or Crystal, which automate email conversations and suggest how to fashion written exchanges. “While that can be useful in certain interactions, in our experience real relationships are built with more of a personal touch.”

Having added the likes of Microsoft, Adobe, Oracle, and HP to their client list with the web app, Nudge has now turned its focus to further simplifying the process of getting insights on leads. “The best possible number of clicks in order to get an insight on a person you are going to reach out to is 0 clicks,” Woods says, explaining the reasoning behind packaging Nudge’s features into a Chrome extension.

The extension kicks into action as soon as you begin typing an email. Say you’re writing an email to [email protected]. The Chrome extension will populate with all the insights you need on Sally: where she was mentioned in the news, what her company is up to, what she’s been saying in social media, who knows her, and who on your team is talking with people at her company. “The insights themselves were always available within the core Nudge application, but being able to show them with zero clicks has been a game-changer in terms of how networkers interact with our application,” Woods says. 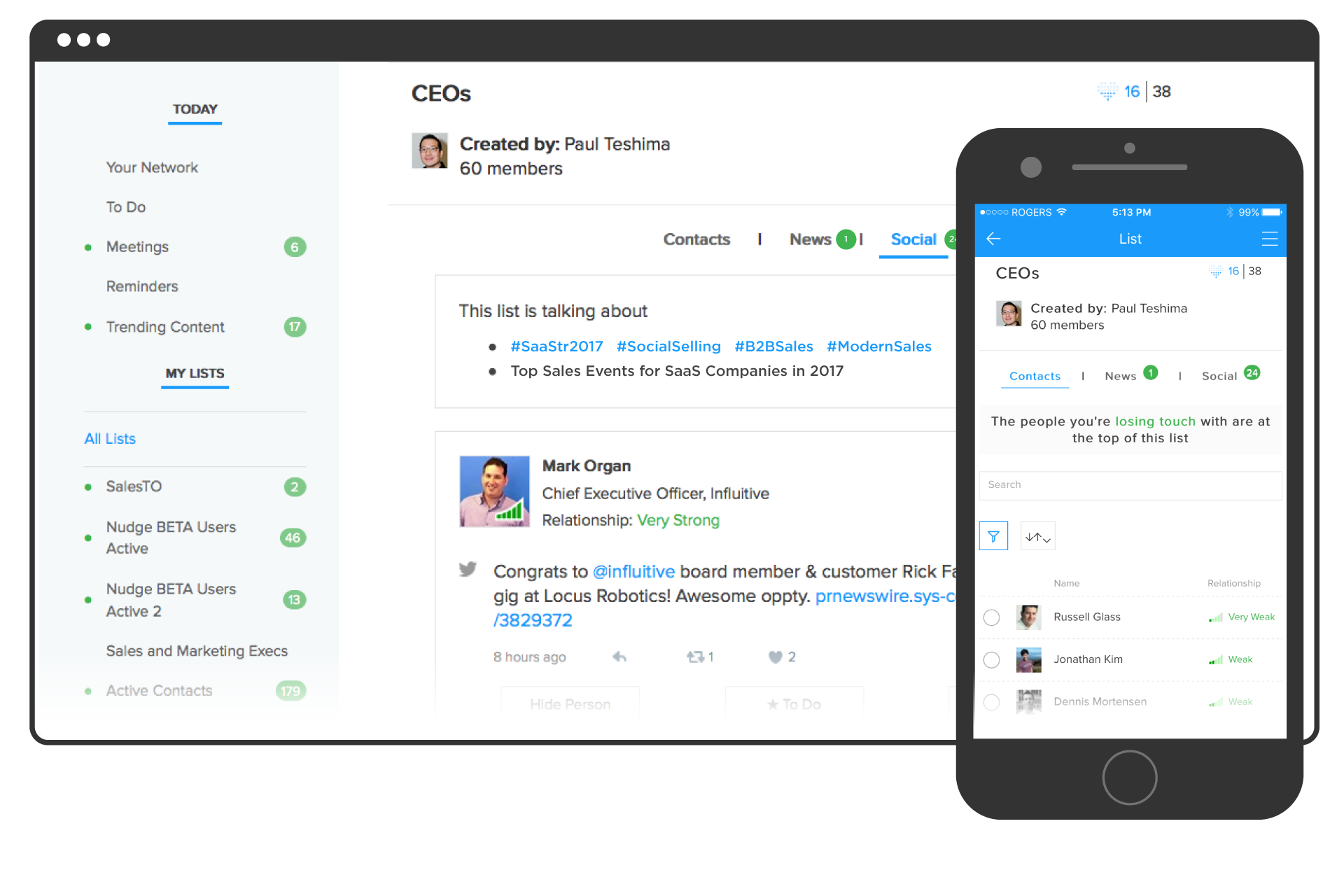 Although they have been around three years now, the team at Nudge is only getting started. “The challenge of building a network of strong relationships, and then using that network of relationships to drive sales, is a wonderfully interesting challenge,” Woods explains. “It’s what we’re maniacally focused on, and we’ll keep getting better and understanding what our users’ networks look like, and what they should do in order to best build the relationships they will need in the future.”

The Nudge extension for Chrome is available as a free download on the Chrome Web Store. The web application is free to use for individuals and starts at $29.95 for teams with targeted sales accounts. An enterprise version of the software is in the works.