It all started when Richard Shaw wrongly predicted that the United Kingdom would stay in the European Union. As a former market researcher, and one who was always well tuned into political news, he was confident that he could predict how people would behave. “I had read all of the news articles, spoken to friends, listened to the experts,” recalls Shaw. “I understood it would be close, but I was confident the UK would decide to remain in the EU.” Shaw was very, very wrong. Sound familiar?

Political comedian and commentator John Oliver was so confident that Trump would lose that at one point Oliver said to him, “I will personally write you a campaign check now on behalf of this country which does not want you to be president but which badly wants you to run.” Oliver’s confidence levels were similar to that of millions of people, but perhaps for different reasons. For much of the rest of the country, as Shaw would conclude, certainty was a misleading by-product of hearing the same positions over and over from a detrimentally small selection of favored news sources–we were reading and watching what made us comfortable, not what made us aware.

New News: Getting Out Of The Echo Chamber

After being blindsided by Brexit, Shaw realized he had been living in an echo chamber–all his news sources were saying the same thing, leading him to a skewed view of both the present state and possible future outcomes. He knew this had to change.

“A researcher by trade, I set about finding out where I went wrong,” explains Shaw. “My conclusion was that the problem was with me. What I read, who I talked to, how narrow the discussions I entertained had become.” Shaw saw his very issue reflected overseas in the wake of Donald Trump’s nod to office. “I saw the same pattern of illusory certainty appear in the US elections and decided to build something that would ensure that people weren’t blindsided again.”

Shaw set to work creating Elmore Green, a news recommendation engine that would feed information to people based on one major factor: it was information they weren’t likely to receive during their regular course of activity. You can think of it almost as an anti-Facebook newsfeed. Our social streams are shaped by what we like, share, and react to, which in turn leads us deeper and deeper into the echo chamber, where all we hear is the voices of those who think like us. Elmore Green provides new, fresh, contrary sources of news. 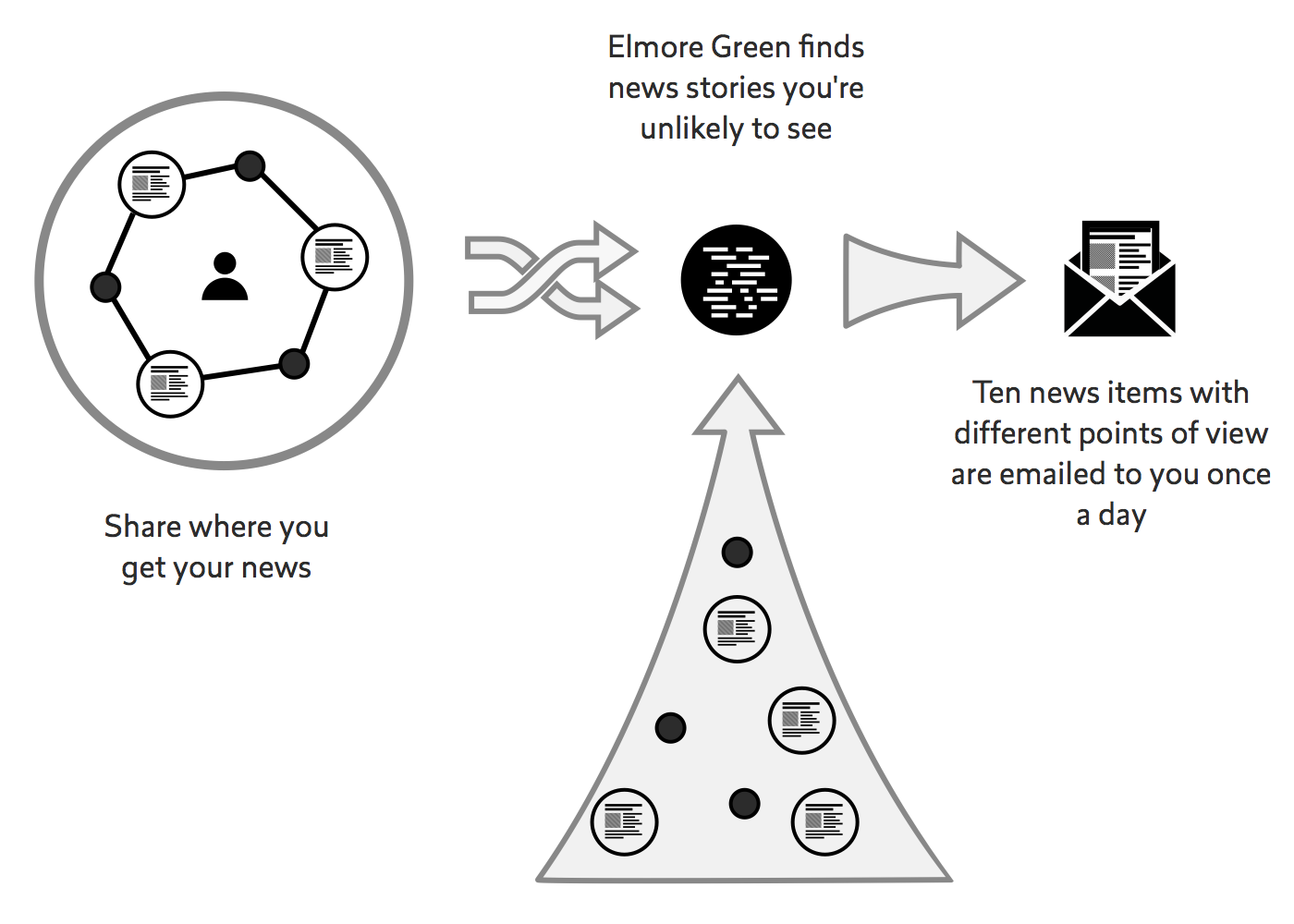 But as Shaw recruited beta testers, analyzed the data, and asked the early adopters about their reading habits, he was able to create an algorithm that pulled news from sources across which they would rarely come, and in some cases, even actively avoid.

The process begins when, after signing up, users select the sites where they commonly get their news. 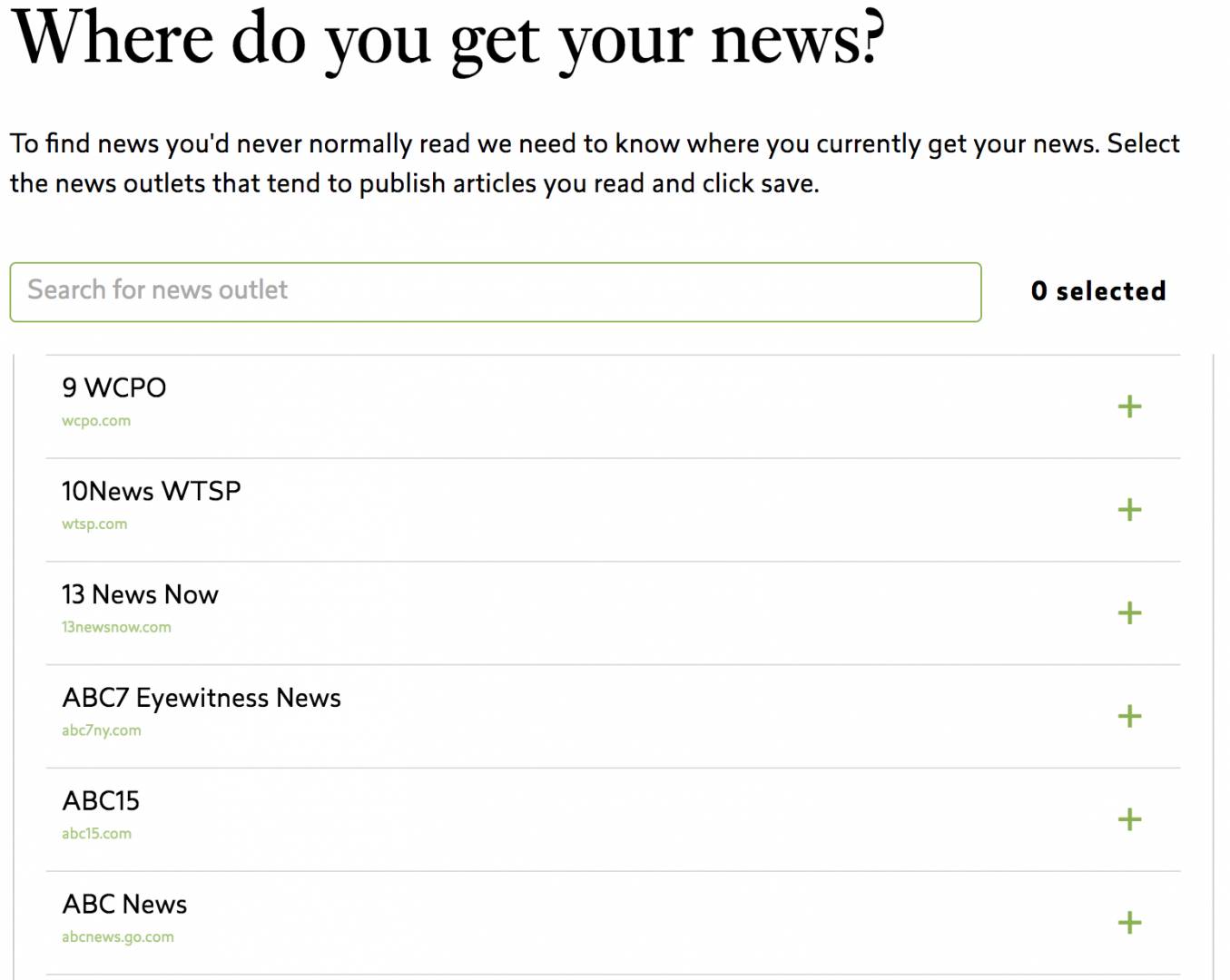 Every day, the recommendation engine selects and emails you ten articles that are, in many ways, the opposite of the outlets you have selected. For example, if you choose liberal sites like CNN and MSNBC, Elmore Green will send you articles from conservative news sites, like Fox or Drudge Report. “The media will always be biased in one form or another,” Shaw reminds me. “The nice thing about Elmore Green is that it counters the biases you are personally exposed to.”

Of course, for Elmore Green to succeed in the long term, it will need to be monetized. Shaw is hoping that a subscription service will allow him to generate revenue from users. With that income, he hopes to be able to develop original editorial content that highlights biases in media coverage.

While I can’t help but appreciate the concept of the site, I do wonder who will be willing to pay for a subscription. Given that most people are happy in their ignorance, will they want to shell out cash to hear that they might be wrong?

Shaw also hopes to grow Elmore Green outside of the U.S. “At the moment our coverage is a little US-centric,” admits Shaw, “and I want to make sure that we offer the same level of coverage to other countries in the world.”

There is clearly a fundamental need for a service like Elmore Green. Hilary Clinton’s stunning defeat and the thousands of embarrassed analysts, let alone regular civilians, are proof of that. Maybe if enough people sign up for this service, we can avoid similar situations in the future.  John Oliver, if you’re reading this, maybe consider checking it out.