Over the last 20 years, the news cycle has reached warp speed. Social media has created an almost real-time news feed with citizens and journalists reporting events literally moments after they happen. During the Boston Marathon bombing and subsequent manhunt, Twitter was heavily utilized as a reporting tool.

When a US Airways flight crashed into the Hudson river, it too was first reported on Twitter. 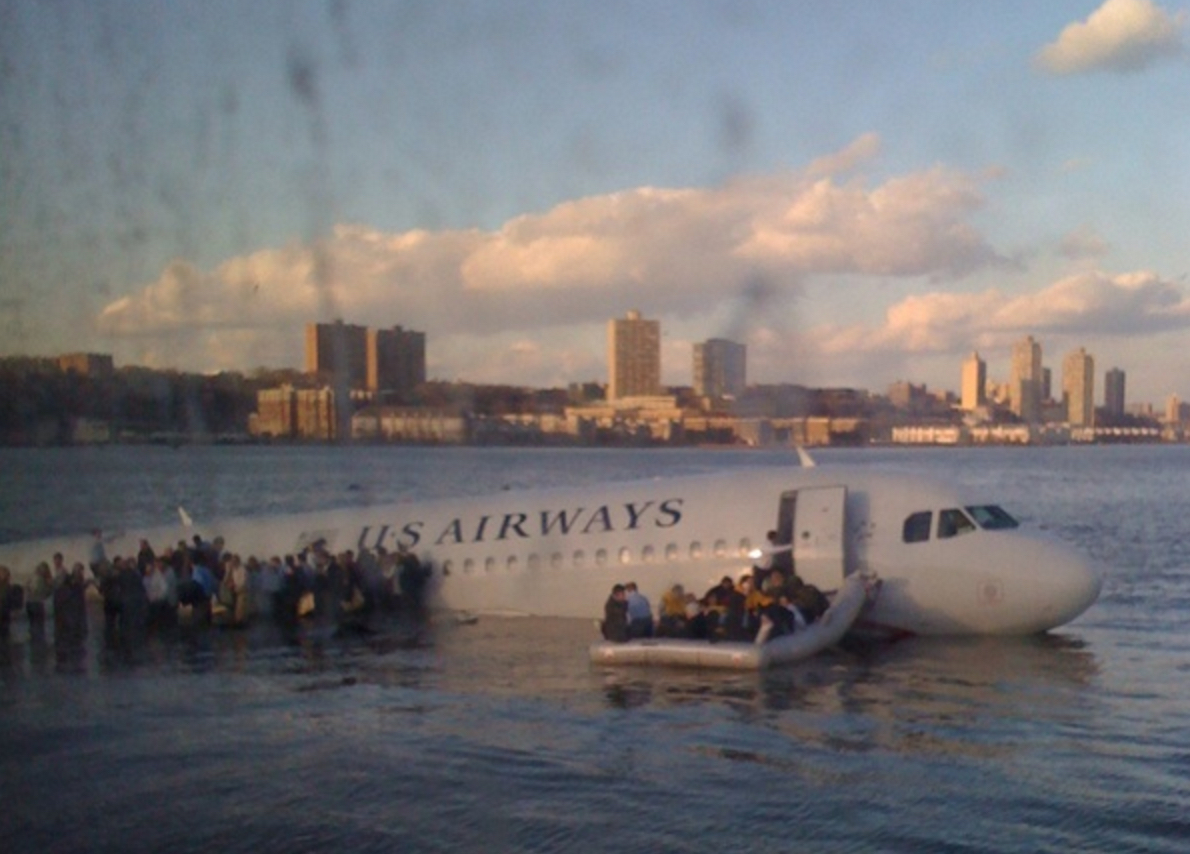 But real-time, often crowdsourced, journalism has several dangers associated with it. First, the authenticity of the event; did it actually happen? We’ve all seen deaths being reported on social media, only to discover later that they were either mistakes or pranks. Second, did the event actually happen as it’s being reported? For example, I could upload a real photo of a car on fire and say it was a terrorist bomb, when in reality, I just set the car on fire.

Newslinn is working to create a platform where citizens can share photos directly with journalists, and journalists can have confidence that those photos are both accurate representations of real events.

The platform has several facets to it. First, journalists create an account on Newslinn. When a citizen uploads a photo to Newslinn, either through the smartphone app (coming in a few weeks) or through the desktop website, it is available to view by all registered journalists. 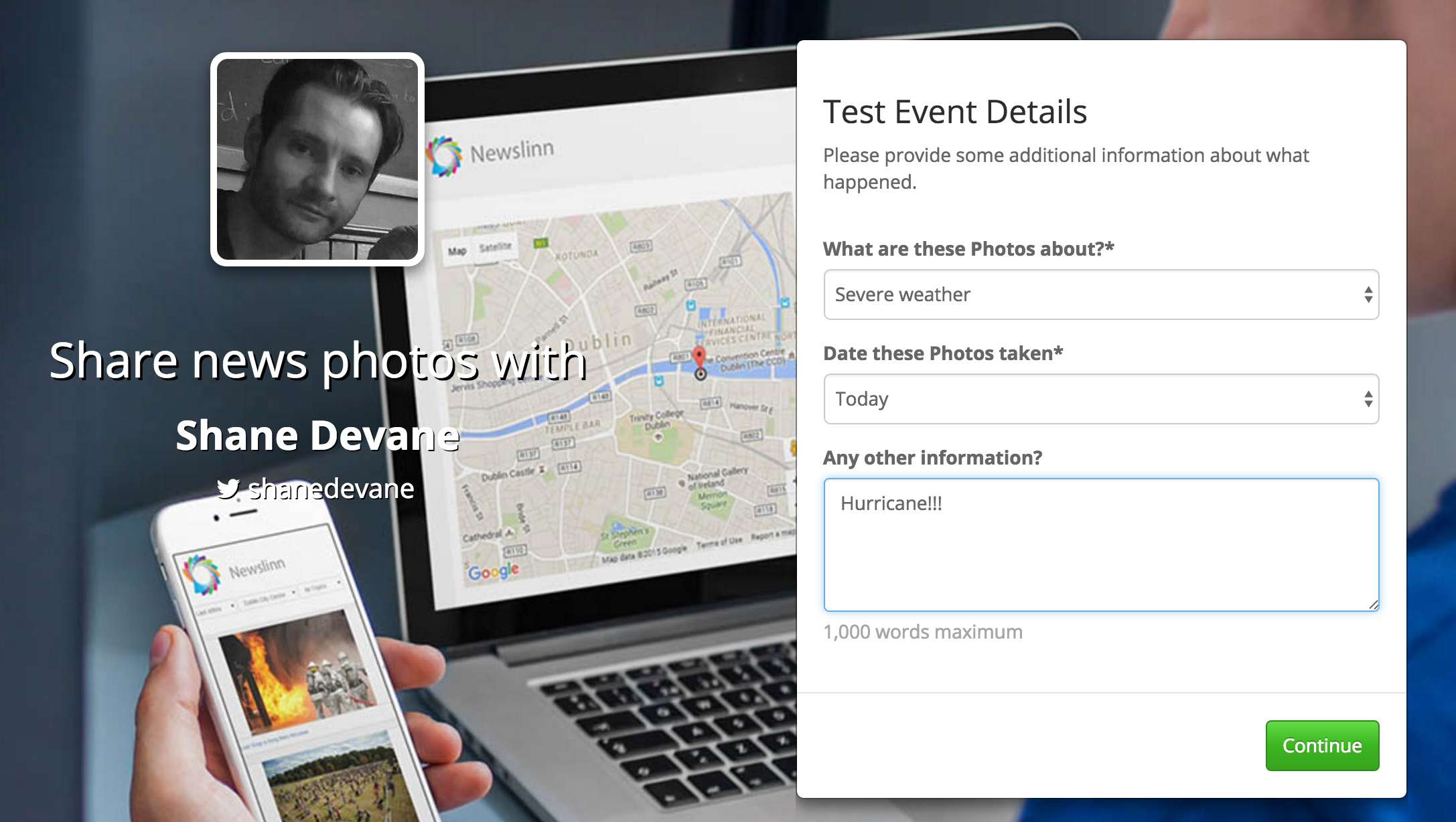 A test photo I uploaded on the Newslinn site

A journalist in Chicago, for example, could go on to the Newslinn site and search for all photos that had been uploaded in the Chicago area. Or, if a citizen elects to share a photo with all journalists in a specific area, the journalists will receive that photo directly in their Newslinn inbox. 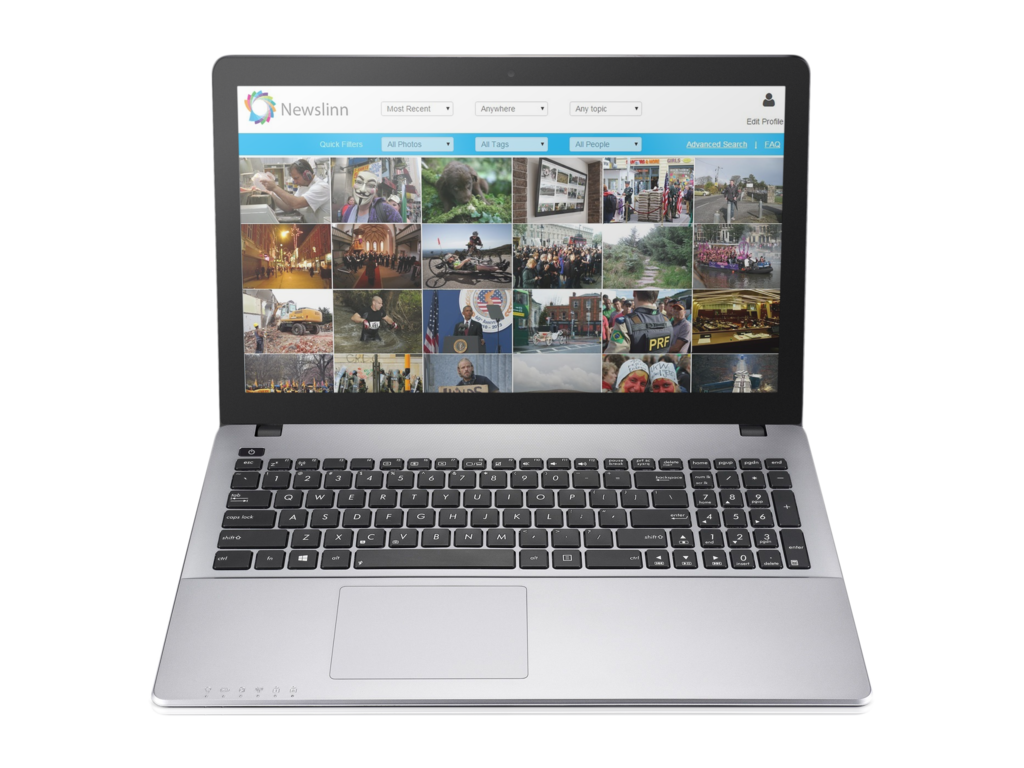 In order to ensure that the photo is an authentic one of actual events, the Newslinn platform uses artificial intelligence to perform a number of verification steps behind the scenes. Currently, the rules engine, which is being constantly updated, uses over 60 different rules to validate the legitimacy of a photo.

These rules include verification that:

Newslinn also pulls additional data from the photos that journalists can use manually to verify photos. Co-founder Shane Devane told me:

Newslinn uses photo metadata to collect the weather forecast, wind speed, cloud cover, temperature and humidity at the time the photo was taken. Aiding journalists to verify the photo further and also to check for abnormalities, i.e., wind direction of smoke within a photo and/or people wearing inconsistent clothing compared to others.

Newslinn also extracts object data from within the photo to further understand what is in the photo (e.g., trees, tanks, people, protest) and uses that data to provide journalists with useful internet resources to help in further photo investigation, e.g., when army insignia is identified, links to military symbols and identification resources are shown (https://www.army.mil/symbols/), along with quick links to Google News and other resources. Especially useful for photos not being shared in real-time.

The goal is to provide as many verification checks as possible for journalists. Devane provided me with the following screenshots to help illustrate the detail into which the system analysis goes: 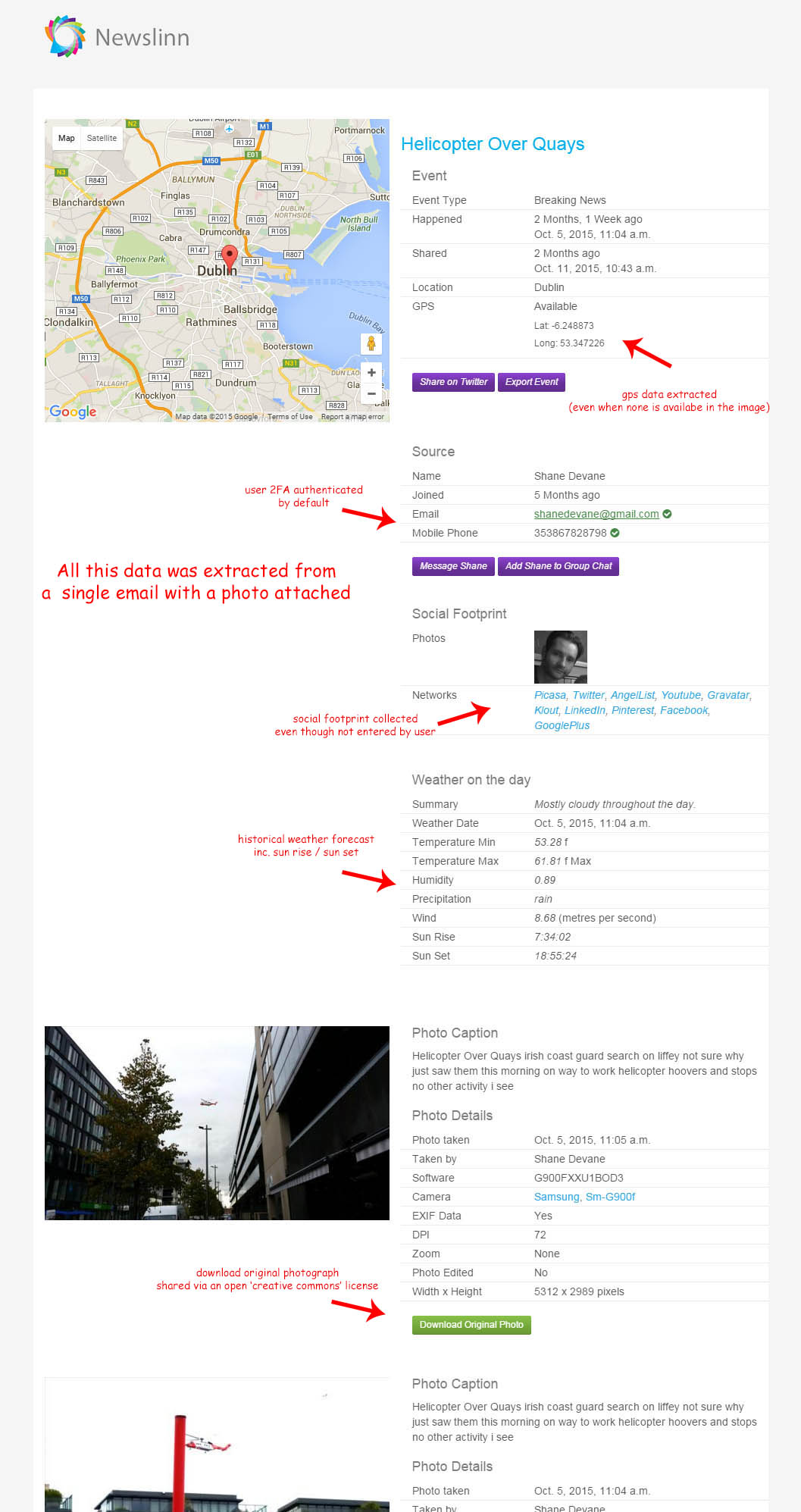 Newslinn is not a place for citizens to sell photos to journalists. Rather, it’s a platform that promotes sharing photos and spreading stories quickly and easily. For people who want to get the word out about a story (a protest, for example), Newslinn is aiming to be their go-to platform.

This seems to be the way that journalism is headed. The news cycle moves incredibly fast and journalists must stay abreast of what is happening. While it’s hard to know whether this particular platform will succeed, it is clear that crowdsourcing photos and information to help break a story is very much in the cards for journalism. Realistically, the hand has already been dealt.