Ever feel that “Life gone cray” is the story of your mind and your body on gluten? You try to avoid it at all costs, especially when eating out. Then you find that it’s hard to relax and enjoy your meal and even your company because you’re always worrying if your food is safe to eat…

Food consumption anxiety in social situations is why Shireen Yates, CEO and co-founder of 6SensorLabs, describes her company’s first product, Nima, as a “social enabler”; it’s a device that analyzes small pieces of food for allergens using a chemical-based test. In under 2 minutes, the first incarnation of the patent-pending Nima – named one of TIME magazine’s “Best Inventions of 2015” – can decipher whether the food you are about to eat contains gluten, thereby giving you the peace of mind and confidence to enjoy your dining experience, without the fear of a reaction that can have you running for the restroom.

The National Institute of Diabetes and Digestive and Kidney Diseases estimates that as many as 1 in 141 Americans has Celiac disease, but many people don’t know they have the condition. Gluten-sensitive people experience similar symptoms to those with celiac disease. Eating anywhere away from home can be a minefield for people with either condition, who can suffer issues from stomach pains and upset, swollen joints, to other debilitating health problems if they eat even a small amount of gluten.

“People who have food sensitivities, myself included, are always worrying if food is safe to eat, especially outside the home and in social settings,” says Shireen. “This anxiety often dominates their lives and restricts not only the foods they eat, but their activities as well. Nima alleviates the stress around unknown ingredients by providing more data about their food, delivers social freedom and makes mealtime enjoyable again.”

Other products on the market for testing food include EZ Gluten, TellSpec or SCiO. TellSpec and ConsumerPhysic’s SCiO — which are both pre-launch — share similarities in their use of spectroscopy technology, and their scan results detect more than just gluten.

What makes Nima different is the technology; it uses a custom chemical process to identify gluten, rather than spectroscopy. 6Sensor believes that using antibody-based detection for gluten will yield more sensitive results. “We wanted to be able to detect at one part per million of a protein, to say confidently that a sample had something or not,” says Shireen.

Shireen sees a psychographic as opposed to a demographic target for Nima. It’s a target that revolves around the insecurity of eating out, and one encompasses a wide range of users – from the mother with kids to the retiree – united in their fear of not knowing what is in their food.

Nima is a small handheld device that fits in a purse or even a pocket. Its use involves three steps:

■ Step 1 ­ Place a small amount food into the disposable capsule and screw on the cap.

■ Step 2 ­ Insert capsule into the device.

After two minutes you’ll get a smiley face or a sad face depending on whether your food contains gluten. The test will identify if a food has at least 20 parts per million or more of gluten – in line with the U.S. FDA rule for gluten-free labeling.

An important part of the Nima value proposition is that a community component is offered, with the ability to share food test results with other users via an iPhone app. App users will be able to view previous test results before dining out and report new results from their own meals.

“Food testing kits currently on the market are clunky and difficult to use, so very few consumers use them,” says Scott Sundvor, CTO and co­founder of 6SensorLabs. “Our technology takes a whole new approach to food testing, focusing on a streamlined user experience through a unique blend of chemistry, electrical and mechanical design, all while maintaining sensitivity.”

Shireen and Scott met while they were both studying at MIT. According to Scott, “We met through mutual friends. She was getting her MBA and I’d gotten my engineering degree from there. We had this shared experience: Shireen has several food allergies and I also have several food intolerances. We both just had these issues where we’d eat out and get sick or feel uncomfortable. Shireen had the idea, ‘Why can’t I just test my food and figure out what’s in it?’ So we started talking about the idea and we researched the market and realized it’s something we could make happen.”

Nima is not FDA-approved and it’s not intended for medical use. The company intends it as a “consumer tool” to use when dining out, Scott says, adding that, “One of the things that we wanted to make sure we distinguish is that we don’t see ourselves as a medical device. So we do not need FDA clearance for the device because we are not using it to diagnose or manage disease. We’re simply providing a product to help people know what’s in their food and guide their habits.”

6SensorLabs claims that the device has been tested and re-tested by their science team. Third-party validation is in-process and they promise to release validation data on their device in the upcoming months.

Gluten is just the first of many proteins with which 6SensorLabs sees a future for Nima. Tests for peanut and dairy are already in the works to be released after gluten. “We field new requests from customers every day for additional food sensitivities and substances for which they’d like to test with Nima, and our goal is to develop a test for each one in the future,” says Shireen.

To help Nima users overcome tricky in-restaurant situations, 6SensorLabs has compiled a few basic dos and don’ts in the form of an etiquette guide for dining out with Nima. The guide is intended to help users and restaurant staff better understand how to work and dine together as they explore new food technology territory together. 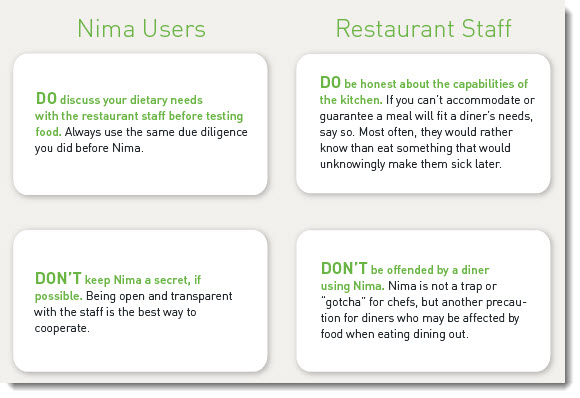 Excerpt from Nima’s Dos and Don’ts

The etiquette guide also discusses the tricky and complex issue of cross-contamination. Since Nima can only test a certain portion of food, its use as an identifier of cross-contamination might be limited. Some food could still contain gluten but show a negative result and the use of Nima could create a false sense of security. On the other hand, a false positive could have a diner wanting to return a meal that in fact contained no gluten.

According to the etiquette guide, “The purpose of Nima is not to perform investigative food testing on restaurants or catch kitchens making mistakes. We actually hope all the tests come back below 20 ppm of gluten! However, Nima is also not a substitute for the typical due diligence a diner would take when researching, ordering and communicating to the restaurant staff about any special dietary requests. Being open with restaurant staff is still the best way to ensure meals can be accommodated.”

While the cost of the disposable capsules might become a drawback for repeat orders – at the presale price they are $4 each which is expected to increase to around $5 depending on how you choose to order – the Nima website offers this perspective on ongoing use:

“There’s truly no single answer that persists for “is it gluten-free?” Ongoing, real-time testing is the best way to be confident that each meal is gluten-free.”

Pioneering tech like Nima is putting the power of data, detection, control and mostly comfort into the hands of the consumer. $247 with recurring monthly costs isn’t peanuts, but the confidence and peace of mind that comes from knowing the food you are about to eat isn’t gluten? Priceless.