The coolest part about having a cast (admittedly, not a long list from which to choose) is knowing that a broken bone is magically healing itself underneath just from being immobile. Having an artistic friend doodle over one can also be fun. Indubitably the worst part of the experience is being unable to do anything when you feel an itch beginning to develop. Before you use a spoon or a coat hanger to reach in, you should know that next time, you may be able avoid the dermal irritation altogether. A team from Illinois has created a new kind of orthopedic cast—one that ensures that the pain of a broken bone isn’t compounded by inaccessible itches any more.

Cast21 is the kind of innovation of which everyone who has had their skin revolt from underneath a cast has dreamed. Quite simply, it is a structure that serves as stable scaffolding for a broken limb, but without completely encasing the area like a traditional orthopedic cast does. Instead it employs a more open helical design (like the “Chinese finger trap”) which prevents the discomfort that arises from trapping heat and sweat inside. That means fewer itches, and easier access when they do occur.

Fittingly, the design of the sleeve-cast created by Ashley Moy, Justin Brooks, and Jason Troutner is inspired by the human body. It uses the striated arrangement we observe in muscles that protects bones from external forces as a template for the intertwined silicone tubes that form the structure. Thanks to a combination of design and composition, there are more benefits to Cast21’s novel product than just itch-prevention. 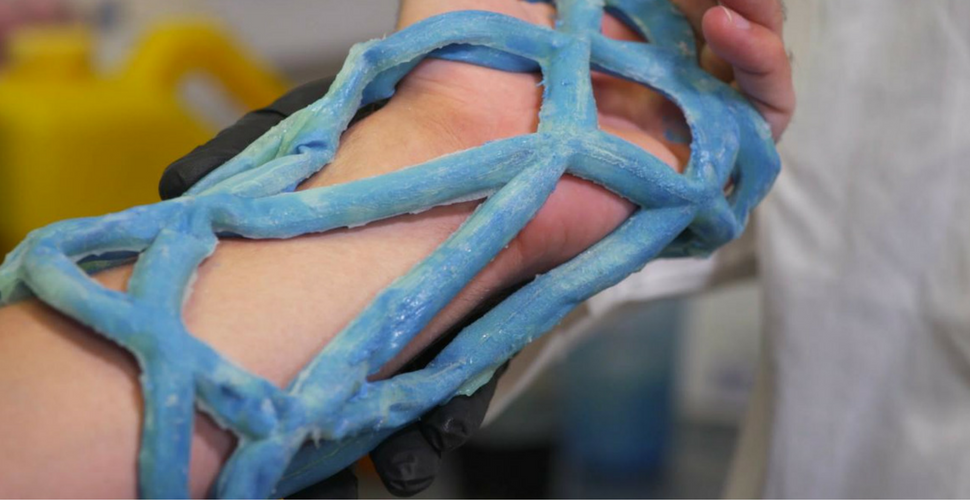 One of the main problems with an orthopedic cast made of plaster or fiberglass is that water seeping in can compromise its structure. Cast21 users face no such problems. The silicone material isn’t affected by water, which means that patients can wash the area around their fracture. Not just that, they can even shower freely or go for a swim if their body allows it. As Cast21 puts it, water goes from being the enemy to a “welcome ally in health and healing.”

Thankfully for orthopedic surgeons, the patent-pending technology has been crafted to comply with prevalent operating practices. No additional equipment or newfangled procedure is required to fit it on a patient; the entire process takes only about 15 minutes. It is also affordable, but the exact pricing will only be determined once the first batch is manufactured.

Although a young startup, Cast21 has managed to gain a fair amount of attention. They were the finalists at the University of Illinois at Urbana-Champaign’s Cozad New Venture Competition. The startup was then enrolled in the Memphis Summer of Acceleration program. It will be working with ZeroTo510, an accelerator that focuses specifically on innovative medical devices. VC firms Innova Memphis and MB Venture Partners are associated with the accelerator, so assuming nothing gets broken, they may just get involved to support the initial prototyping and manufacturing stages.