Thought that paper swan you made was complex? Maybe it was, but your origami chops are not high-level enough until you’ve built a whole bicycle out of paper–one that can actually move and carry people around like a real bike. The Urban GC1 does just that, and it is taking a stab at addressing that fictional climate change thing by being about as metaphorically hipster green and non-polluting as possible.

The bike is a creation of Green Code, an outfit out of Chihuahua, Mexico. The startup works on developing innovative products with a strong focus on ecology and environmental preservation. That aim is very apparent in their sole product at the moment: the Urban GC1.

The GC1 is made primarily out of paper. To be more specific, 55% of its body is made up of recycled kraft paper, which is a lot more durable than regular paper. As much as it would have been nice to have the bike made entirely out of paper, there are other materials in there to lend a desirable degree of structural integrity. 35% of the body is composed of reusable metals, which are used to buttress high-stress parts such as the rims. The remaining 10% is made up of recycled plastic.

Now the obvious question that arises when dealing with a bike made out paper is if it will disintegrate in the rain–or show signs of wear too quickly through exposure to the elements in general. The makers have taken measures to avoid that. The GC1 is painted to keep the paper from getting in contact with water or anything else that could compromise its structure. The paint used is made out of recycled polystyrene. How well and how long the paint does its job, you’ll probably be able to tell only after prolonged use. 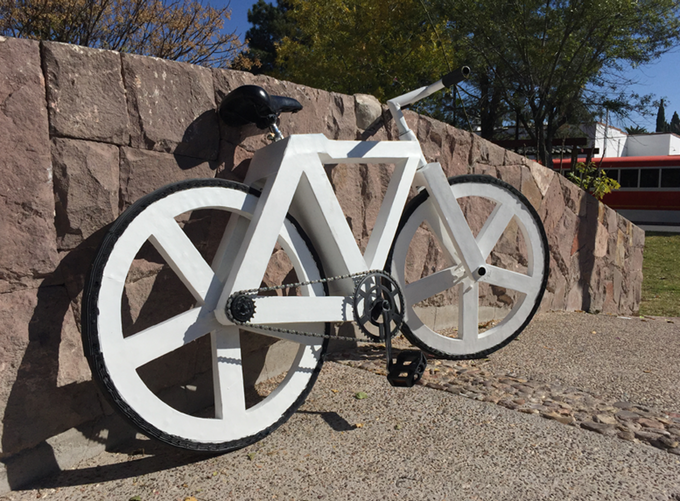 Another important consideration given the GC1’s constitution is its load-bearing capabilities. It seems to do pretty well on that front if the makers’ claims are true. On paper (get it?), the GC1 can support up to 683.5 lbs. To stay on the safer side, Green Code recommends riders weigh under 242.4 lbs. The bike itself weighs just 22 lbs.

Owners apparently don’t have to worry about a flat tire ever. The tires are made out of recycled plastic, rubber, and GC Panel–a kraft paper panel developed by Green Code which is also used to construct various other parts of the bike. The result is tires that don’t need to be inflated in order to do their job. There are other tires out there which achieve the same results but by employing different methods.

To raise funds towards a manufacturing run, Green Code has set up a campaign under the recently initiated Kickstarter Mexico operation. It has raised $8,400 so far of its $11,800 goal. Units of the bike are available via the campaign for about $100.