There are so many times when you’re in a conversation with someone, either over the phone, via text message or in person, when you suddenly need to know something or do something: what time Zootopia is playing, who played the villain in [insert movie name], what’s the best way to get somewhere across town, and GET ME A PIZZA.

But now, every task has its own app – Fandango, IMDB, Google Maps, etc. – and if you’re like me, you’re kind of lazy and your phone is kind of slow. It would be so much easier with a virtual assistant, and Siri just doesn’t always do it for me.

Prompt, however, does. Marketed as “The Command Line for the Real World,” Prompt uses text commands through SMS, Slack, Telegram, Hipchat, Kik, its website and even in your computer’s command terminal to communicate with over 40 services, which it then uses to help you out in all sorts of ways. 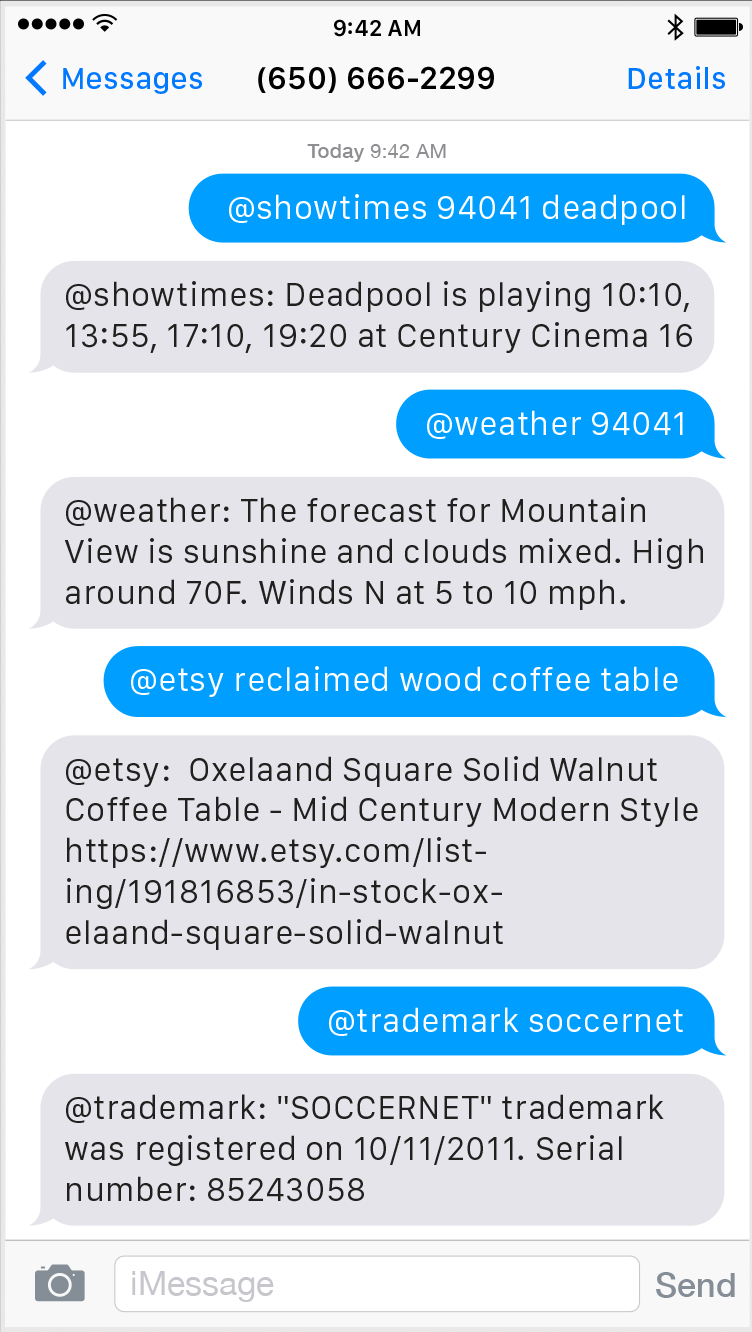 I have been disappointed by “virtual assistants” before, especially when I used Operator, the app that promises to help you shop simply by sending a text. Somehow I got it into my head that there would be artificial intelligence on the other end instead of a person. I was wrong. I was delighted when they helped me find a gift for my mother, but was quite disappointed that I hadn’t had a more exhilarating interaction with a digital concierge.

As a result, I went into Prompt with low expectations. Those expectations were quickly lifted, though, when I discovered that no humans were involved other than myself (and the geniuses who built the thing). Simply by choosing a service and giving Prompt some beyond-basic information or keywords, the world was at my fingertips.

For example, I just typed, “@wikipedia potato” and within seconds was reading a short blurb from Wikipedia about the history and science of the popular tuberous crop. Sure, there are other ways to do the things that Prompt does, but now I don’t have to leave my favorite messaging app to do them.

It’s more than just a tool to fetch information from databases; Prompt can track packages for you, add events to your Google calendar, post a tweet, and soon, it’ll be able to help you order a pizza and send money via Paypal. Really, the possibilities are endless.

What is most unique about Prompt is its reach – its very extensive reach. Prompt doesn’t have a standalone app, so by focusing on content-level integrations with existing interfaces that people already use, Prompt seems to fly higher and straighter than other virtual assistants out there. Google Now is strapped to Google, Siri is strapped to Apple, and Cortana is strapped to Microsoft. Prompt is everywhere.

Within the past couple weeks, Prompt has already added a number of new platforms on which it can be accessed, and has been teasing the use of Dominos and Paypal, seemingly ready to launch at any moment. Prompt is ready to soar, and I’m ready to take off with it. If the first 40 commands and services are only the tip of the iceberg for Prompt, I’m excited to see what it can do when it reaches its full potential. Or more accurately, “@prompt pumped”.