In the pecking order of “sexy” startup verticals, word processing ranks dangerously close to the bottom, somewhere between accounting software and HR tools. That said, anybody prepared to put up with the lack of attention in the word processing sector has the opportunity to be compensated with the collective wealth of Microsoft Word-haters everywhere.

With basic writing software long overdue for a fix up, Quip may just be the  the right product at the right time for the job. And now they’ve got some extra cash to get it done.

Quip is a word processor and collaboration tool bundled into one. It’s like an Asana module made for Google Docs but as native to the mobile ecosystem as Evernote. In fact, its creators were so dogged in their mobile-first approach that it was a good two years into the operation that a desktop version of the software was first released.

Now, announced just last week, the startup has added $30 million to its kitty in a Series B led by Greylock and Benchmark. Both were also primary contributors to the $15 million Quip raised in a previous funding cycle. Close on the heels of the funding round, it was announced that former New Relic CMO  Patrick Moran had been hired as their Chief Customer Officer.

With a growing number of users, investor money in its bank, and the ability to poach well-known names like the big-boy startups do, Quip’s idea stands validated. Part of that idea is killing Microsoft Word and Google Docs. 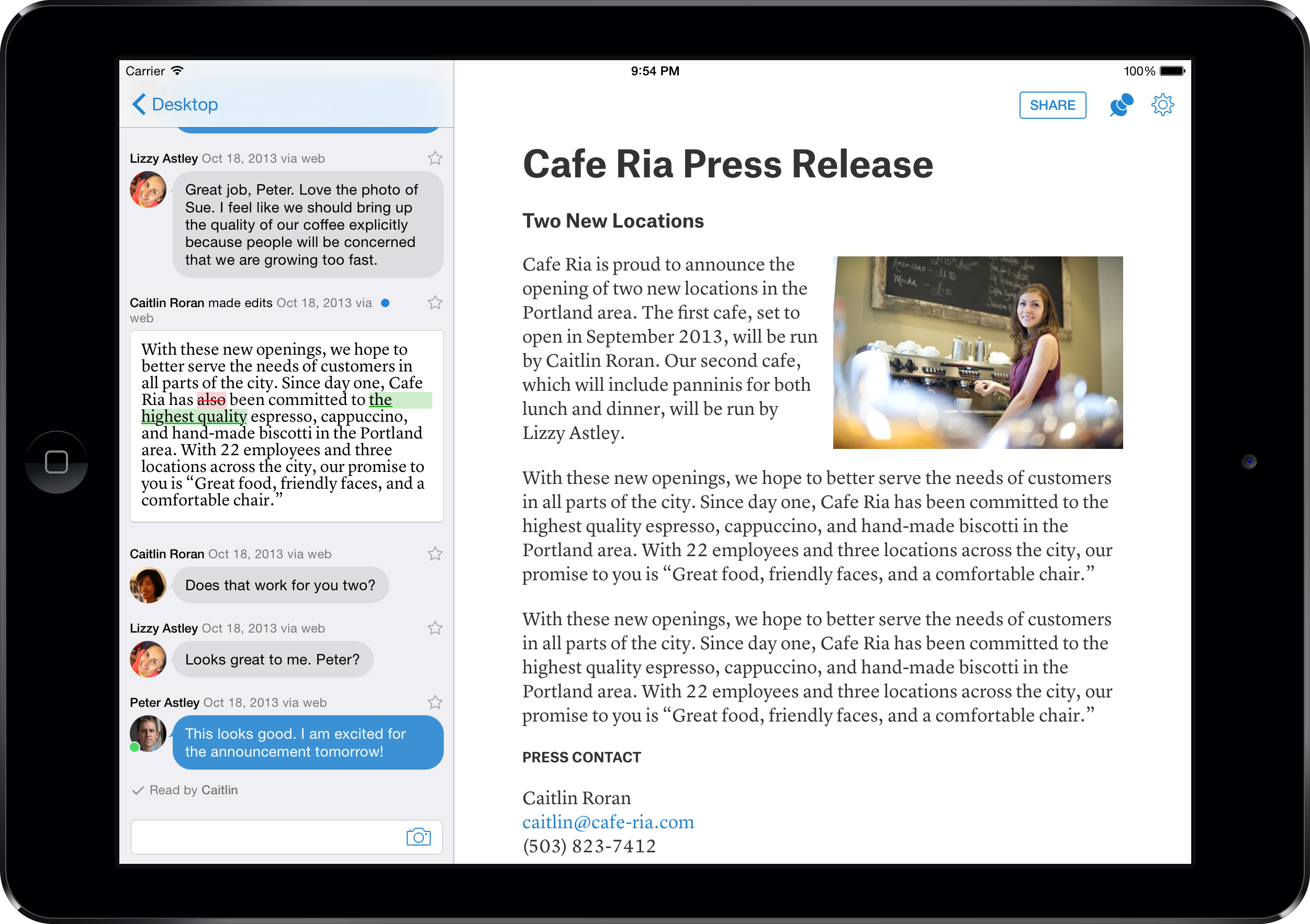 Taking on Microsoft and Google

For a piece of software that has monopolized a massive segment for decades, Microsoft Word has a fair bit going against it. It can be hard to use, has a dated interface that will never get out of the way to allow for distraction-free writing, and imposes a document structure that’s about as contemporary as bell-bottoms. Don’t forget that Microsoft got Word to where it is by acquiring a small cottage industry worth of grammar checkers, mail mergers, and spell check software. This effectively killed innovation in the industry for a long time.

Even after all these years, Microsoft hasn’t quite been able to cater to the changing needs of its customers. A vestige of its days as the lone player in the market, Word documents don’t always convert accurately with other word processors and documents made in one version of Word may not even be readable by another. Some some frustrations were resolved with Office 365 but not nearly as many as needed to be.

Google Docs also happens to be in Quip’s crosshairs. Docs is primarily a web application and does a better job at creating a platform for collaboration than Word does. However the transition from online to offline is often a problem and the changes don’t always translate seamlessly across users.

Quip was founded by Bret Taylor, who was once part of the teams behind the creation of Google Maps and the Facebook ‘Like’ button. When Microsoft’s Office Online suite of applications was still quite new, the startup was busy putting together a mobile-first word processor.

Quip doesn’t treat documents as files the way conventional word processors do. Instead, it breaks down documents into smaller fundamental units, with the ability to integrate the units into a complete document when required. By doing this, it’s possible for teams to work on different parts of a document simultaneously and put them together with ease. Also, it causes fewer issues when the document needs to be updated with changes made offline.

Even though the structure is somewhat fragmented, Quip still offers “version control” functions; any variation between content units edited by collaborators is saved and displayed in a split-screen.

Communication within the app is also extremely efficient, diminishing the need for instant messaging apps or emails clients to fill in the gaps. The ability to communicate with team members natively isn’t something many word processors offer, but Quip has that covered.

And then there’s the mobile-first strategy; being able to easily make edits on the move with a mobile phone is extremely powerful and that is central to the Quip experience.

Microsoft and Google aren’t the only big players in town. Interestingly, in the same week as Quip came into some big money, Dropbox announced Paper, a spinoff of its note-taking application Notes. Like Quip, Dropbox will be focusing on making collaboration as painless as possible for those working with text documents on their mobile devices. Quip is more modestly resourced but has the user base and features to prove its worth against well-heeled competition.

Quip also has relevant industry trends to go up against. Mobile-based collaboration and productivity tools have fallen on hard times lately. The seemingly bullet-proof EverNote had to downsize its team and shut shop at a number of international locations recently. Employees blamed the company’s lack of direction and iffy monetization strategy. Even Dropbox, only recently having put itself in the docs race, has struggled trying to expand its offering and keep the cash cow grazing.

But there is no question that Quip addresses real problems that many users have with existing word processors and if there’s one thing the space has going for it, it’s many users. It’s also quite affordable; the Enterprise version of their software is only $25/user/month. With this recent cash injection, the startup is beginning to build up the resources required to take on some of the giants. Hopefully they can hit on a dependable revenue stream quickly so the days of dealing with indentation issues and document discrepancies are behind us.