In the fast-paced world in which we currently live, sometimes it’s worth the time to appreciate the beauty of things in slow motion. That’s the premise of Slow Dance, a frame that takes real objects, like leaves and feathers, and makes them look like they’re slowly flowing in a gentle breeze. The device was created by Jeff Lieberman and is now available for backing on Kickstarter. Jeff’s campaign has already raised over $230,000. As subjective as aesthetics may be, I think we can all agree that that is a beautiful thing…

The foundation of the effect is built-in strobe lights that flash 80 times per second at varying intervals. Unlike the strobe lights on a dance floor, this is faster than the eye can see. The framed object vibrations are synchronized with the flashing to create the illusion of slow motion. This principle is referred to as the “persistence of vision” and it’s fairly similar to how TV’s work – by moving still images quickly enough so they look like continuous motion.

Just like a blank canvas, users are encouraged to bring their own objects to Slow Dance, from weeds in the street, to flowers and bird feathers (live feather-plucking is NOT encouraged). The device has different modes, enabling users to cycle through varying visual patterns like slow and smooth or others that make the object appear to jump through space.

Slow Dance is made from a 2” pine wood frame, with two springs on the inside to secure the objects. It’s 12.5″ x 14.5″ x 2″, weighs just 3lbs, and is powered by a 12v US/Euro UL approved power adapter. The device also is virtually silent. If needed, magnets can be adjusted to change the “volume” from the movement—the Kickstarter page mentions that in tests, the noise from a feather couldn’t be heard from 10 feet away in a quiet room.

According to the campaign, it is safe to touch any part of the frame, object and magnets while in-motion. One reality of the science is that Slow Dance is engineered to work only with indoor light; when there’s a certain degree of sunlight, the slow motion effect is weakened. The built-in brightness controls are engineered to work in most indoor environments though, even when a few feet from the window. 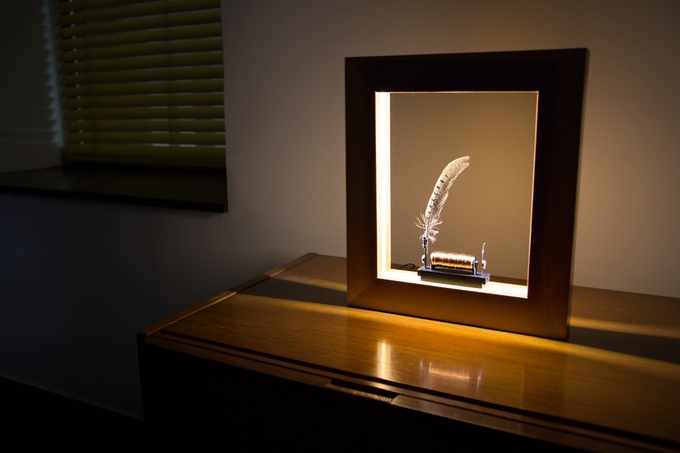 The device was selling for $249 but at the moment they aren’t taking more orders. There is also a premium limited edition version of Slow Dance that is hand crafted from walnut. Each of the limited edition units are numbered and signed by the craftsman Forrest Stone. The estimated shipping date for all Slow Dance versions is March 2017. You can also just back the project if you think it’s cool. Which it most certainly is.