Fitness trackers are everywhere and while many attach to clothes, the future of wearables will definitely see a lot more smart clothes, eliminating the need for additional accessories. Now there’s a new line of bras designed in such that manner; fitness tracking technology built right in. The OMbra, recently released by OMsignal, isn’t just built for comfort and “chesthetics,” but it’s built to be pretty functional and insightful too. Apparently, it’s the world’s first “smart bra.”

First and foremost, it is an athletic bra, so it starts with form & physical function. According to research by OMsignal, over 70% of women do not pick the right size bra. Additionally, typically straps are the most common complaint about sports bras; the way women run can be greatly affected by how their breasts are supported. To help overcome these problems, OMbra features four-way stretchable fabric that adapts to the body and serves as an absorbent to pressure, reducing stress on the back and shoulders.

Then we quickly get into the really “smart” stuff. The bra, of course, has a companion mobile app; it is the first ever running app to combine heart rate and breath monitoring to accurately determine unique and personalized “running zones”. By guiding the users through the zones, the technology helps users achieve greater progress by maximizing fat burn while reducing the risk of injury.

Another core metric from OMbra is the fatigue gauge. This is based on the state of rest before running, biometric effort while running, and the state of tiredness after each run for 14 days. While similar technologies are on the market already, they only use heart rate as a measurement whereas the OMbra and OMrun use proprietary algorithms and heart rate variability (HRV).

Through the bra, “Biometric effort” is evaluated—that’s the overall level of effort the body puts into each run, and tracking that helps to ensures users don’t over-train. The evaluation is based on heart rate, breathing rate, and heart rate variability. Finally, the biometric “coach” feature of the bra analyzes performance goals to determine if you pushed yourself hard enough, and if you’ve been progressing over time.

This smart bra didn’t come about overnight. In fact it was created four years ago but didn’t hit the market due to a lack of resources. Over the course of a year alone, the company knocked out 1,633 prototypes, testing and optimizing every parameter methodically. After a lot of hard work, the OMbra is finally available. You know what they say in the smart bra world: “one thousand six hundred and thirty-fourth time is a charm.” 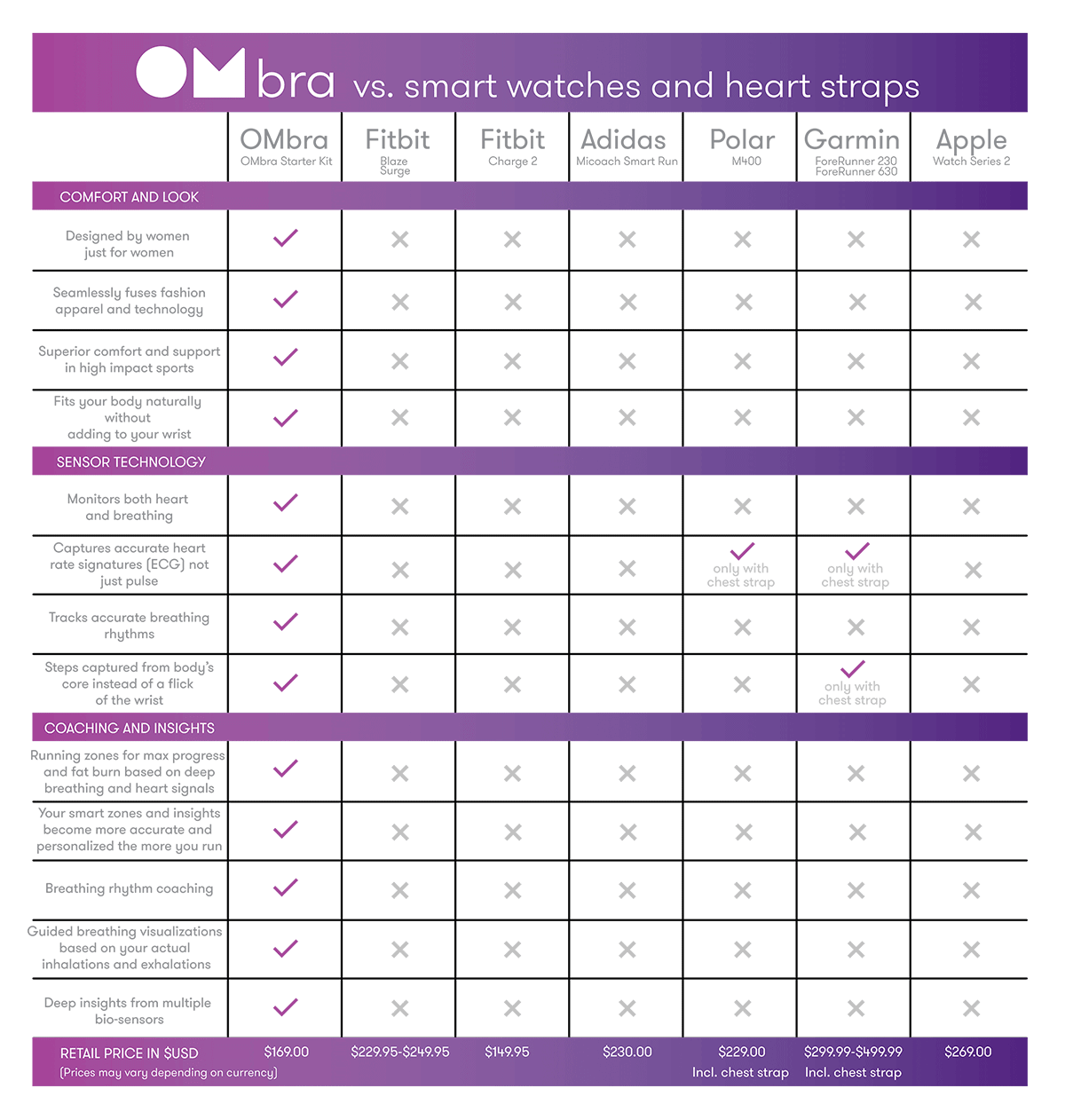