We live in an era where most people have become dependent on technology. We can’t help but to take out our phones when we are waiting in line, or waiting for a friend, or waiting for, well, anything. We use our smartphones for basically everything from daily news, to research, to recipes, directions and medical advice. People are permanently connected, and now children are no exception. As a result, symptoms of smartphone addiction—a “real” affliction or not—are a real concern.

We must admit that mobile devices are a great way to keep children entertained, occupied and thus, quiet. It is a blessing that could at some point become a curse when children form a sort of addiction to their electronics. More and more parents are looking for ways to effectively manage their children’s smartphone activity. Two indie developers recently launched an app called Luna Launcher to lend a hand.

Like many other parents, Bao Le, one of the founders of Luna, was having issues with his 5-year-old son spending too much time on his tablet. Le was having a difficult time finding an app that would enable effective “parental control” features on the device. “I came up with an idea: making the device easy to use and safer for kids,” recalls Le. “I then started to create this app with my college friend as a side project.” Both Le and his colleague have 15 years of experience in software development, and between their concept, their experience and their idea, what has emerged is much more than an improvement in usability and safety.

Luna Launcher, currently available on Android, helps parents control and monitor what their child is allowed to access on a smart device; from specific apps, phone numbers and contacts, all the way to location-based restrictions and time caps. 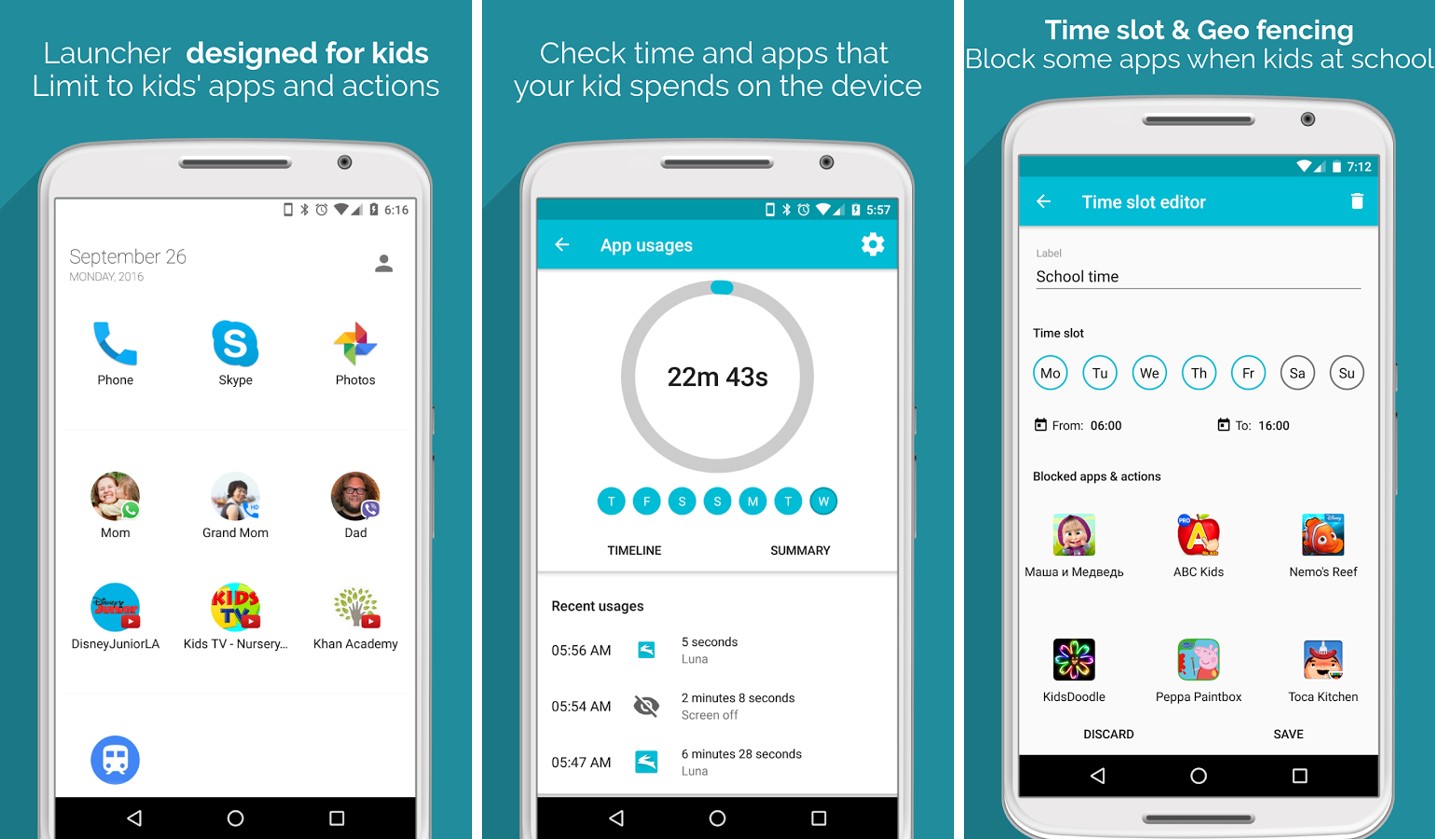 Recently, the founders released the Apps for Kids feature, which intelligently bubbles up a list of kid-friendly apps from which parents can choose to enable for their kids. “Our algorithm relies on apps that parents added to Luna, how kids use apps and reviewers to generate age appropriate apps for kids,” Explained Le. The feature allows parents to easily explore vetted apps rather than having to search though the entire unfiltered catalog of the Play Store as most generally do.

A key feature in Luna Launcher is the App Usage Tracker feature, which tracks how much time a child spends on a device. With that, parents can set a usage limit with automated enforcement; the device will lock down after a specific amount of time, giving parents full control on how long a child could be using their mobile device.

The American Academy of Pediatrics recommends limiting a child’s media time to no more than 2 hours per day. However, AAP also reported that “today’s children are spending an average of seven hours a day on entertainment media, including televisions, computers, phones and other electronic devices.” Luna displays tracking per day, week, month, year or overall. Usage is also broken down per app, so it is easy to determine which apps are attracting the most attention.

Parents can also configure a permitted contact list to control who can receive calls and messages from the child’s device. The app also includes a built-in YouTube player, making it easy to select specific channels or videos that are appropriate for child viewing (currently YouTube built-in controls only care if you are under or over 18).

Similar apps such as, Kids Place and MMGuardia have attempted a similar approach with similar technology, but they’re not quite the same. Kids Place does not track usage time, but does monitor which apps are accessible. MMGuardia leans their controls more towards management of young teens, though they also make things a little more complex with age-based restrictions on apps, iTunes music download constraints, and an entirely separate administrative app for parents.

“Most of parental control is not focused on contents for kids and some settings are not transparent to kids—like remotely locking apps is not the best way to educate kids,” says Le. The founders of Luna Laucher are aiming for a design that is both protective of kids and more suitable for them, allowing the regulated environment to still provide a relatively easy and enjoyable software experience. It’s about safety, but it’s still a bit about fun.

Luna launched its first beta version in August, and in September the app was available for download on the Play Store. The founders are continuing to improve the app and since launch have added a premium upgrade (with a one-time fee of $3.49); the upgrade adds time slot and geo-fencing settings to block apps during specific timeframes and in certain locations–perhaps to facilitate homework time, school time, or dinner time.

The updated version of the app has been downloaded over a thousand times as of today. Of their 38 reviews, 27 are five star ratings. Hopefully those five star ratings mean good things for the future of our five year old technophiles.