Cycling is an enjoyable activity for many, but when it comes to riding at night, there are quite a few dangers that affect even the most experienced cyclists. While there are plenty of lights for cyclists on the market, the primary limitation of those devices is that the beams are fixed at a specific angle. Speednite is a smart headlight that is designed to move based on head movements from the rider. Unlike traditional headlights which lock into place, Speednite is a tilt-able (800 lumens) light with a maximum vertical movement of 130 degrees.

The headlight supports multiple modes including full light, half light, fast flash, and slow flash. The device is designed to be water resistant. It’s powered by a removable rechargeable battery that can be charged via micro USB at home or on the go. In addition to being a headlight, the device also helps keep cyclists safe with a couple of additional safeguards such as side laser indicators that flash based on the direction the rider is planning to turn.

Should the rider get in an accident while cycling, Speednite comes with an auto SOS warning function that triggers ten seconds after the helmet sensor detects an abnormal impact. Speednite then activates the SOS signal light, and the companion mobile app also notifies the selected emergency contact. In addition to the head motion controls, Speednite also includes a wireless handlebar remote control that enables users to manage the system manually. It provides headlight control, left/right indication control, and hazard light control.

Although the movable headlight and safety components of Speednite are notable, what really sets the device apart from traditional cycling lights is the device’s built-in cycling computer. The computer has a 1.44” front color screen, supports third-party BLE cycling speed sensors, has a BLE cycling cadence sensor, and is equipped with BLE heart rate sensor connectors. When connected to the Speednite app, the computer also captures cycling data for later review. 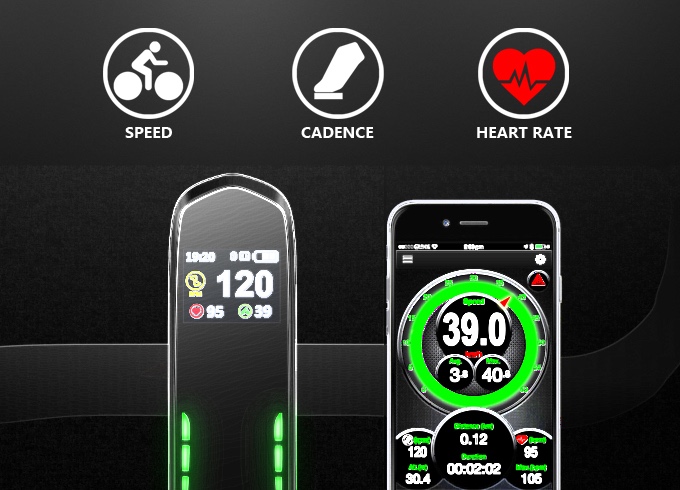 Speednite has a battery life of two hours when used at maximum power, or it lasts for 4-40 hours when in half/flashing light mode. The core device is sized at 200mm x 48mm x 61mm, weighs 330g, and has a stem length of approximately 90 to 100mm.

So far the makers of Speednite have raised over $10,000 towards their goal via crowdfunding with an estimated shipping date as early as October 2017. Early bird pricing for the device starts at HK $1,200 and includes a Speednite stem, a head motion sensor, a wireless control, and a rechargeable battery.