Whether it’s for work productivity of spontaneous entertainment, there are plenty of scenarios in which a second (or third) larger screen comes in very handy. Unfortunately, with the existing options on the market, setting up that extra screen is either financially or physically impractical—but leave it to the startup world to figure out a solution that is neither and still lets you “GO BIG wherever and whenever you want.”

A company called Arovia created SPUD; it stands for Spontaneous Pop-Up Display and it’s a high resolution 24-inch display that collapses and expands like an umbrella so users can easily extend their workspace or watchspace just about anywhere they go. Closing in from its full 24″ span, SPUD compress into the size of a book, and in any state weighs less than two pounds. Unlike glass displays, SPUD is built with a flexible polymer that can’t be cracked or chipped. The “screen” is totally washable too.

SPUD might be a compact device but that doesn’t mean the makers sacrificed quality for portability. A combination of custom optics and the latest DLP technology provide a sharp, bright, image. With support for both HDMI and wireless connections, SPUD can hook up to smartphones, laptops, and just about any other mobile device, supporting everything from streaming video and mobile game play to PowerPoint creation and photo editing. There’s also a set of built-in speakers and a headphone jack. 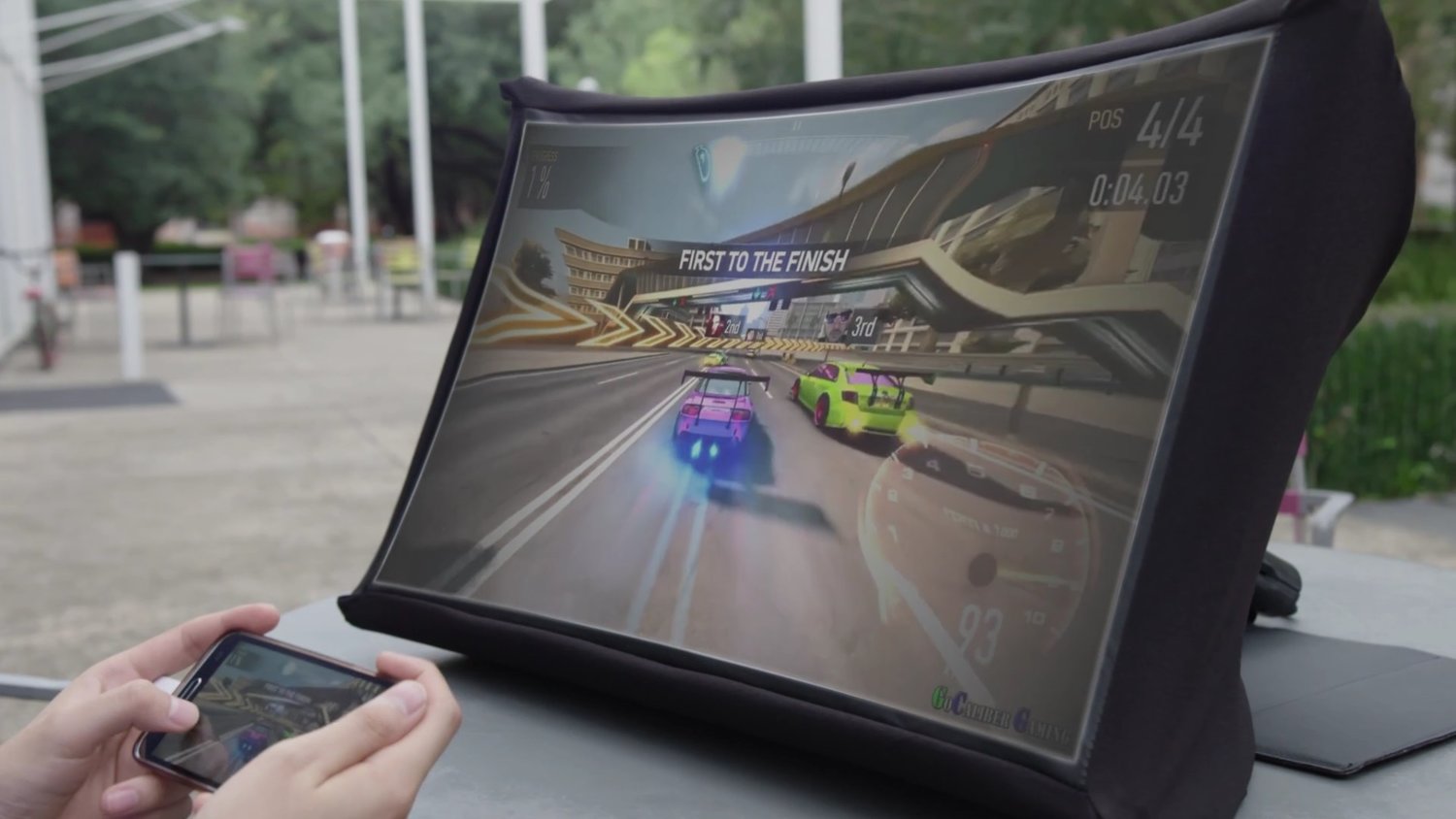 When fully expanded, SPUD is 21 inches wide, 11 inches high, and 14 inches deep. It’s the size of a large desk monitor with almost four times the space of a 13-inch laptop screen, and 23 times larger than the screen of a standard 5-inch-ish smartphone. Rather than relying on proprietary connectors, SPUD uses a standard HDMI cable, and there’s also support for wireless connectivity.

The screen is set for a resolution of 1280×720 (that can’t be changed) to balance cost and performance. To make a higher resolution possible, the screen would have had to be 20% larger. If a lower resolution were used, spreadsheets and presentations wouldn’t be readable. Put in context, you’re definitely coming out on top; most modern projectors only have a resolution of 854 x 480. 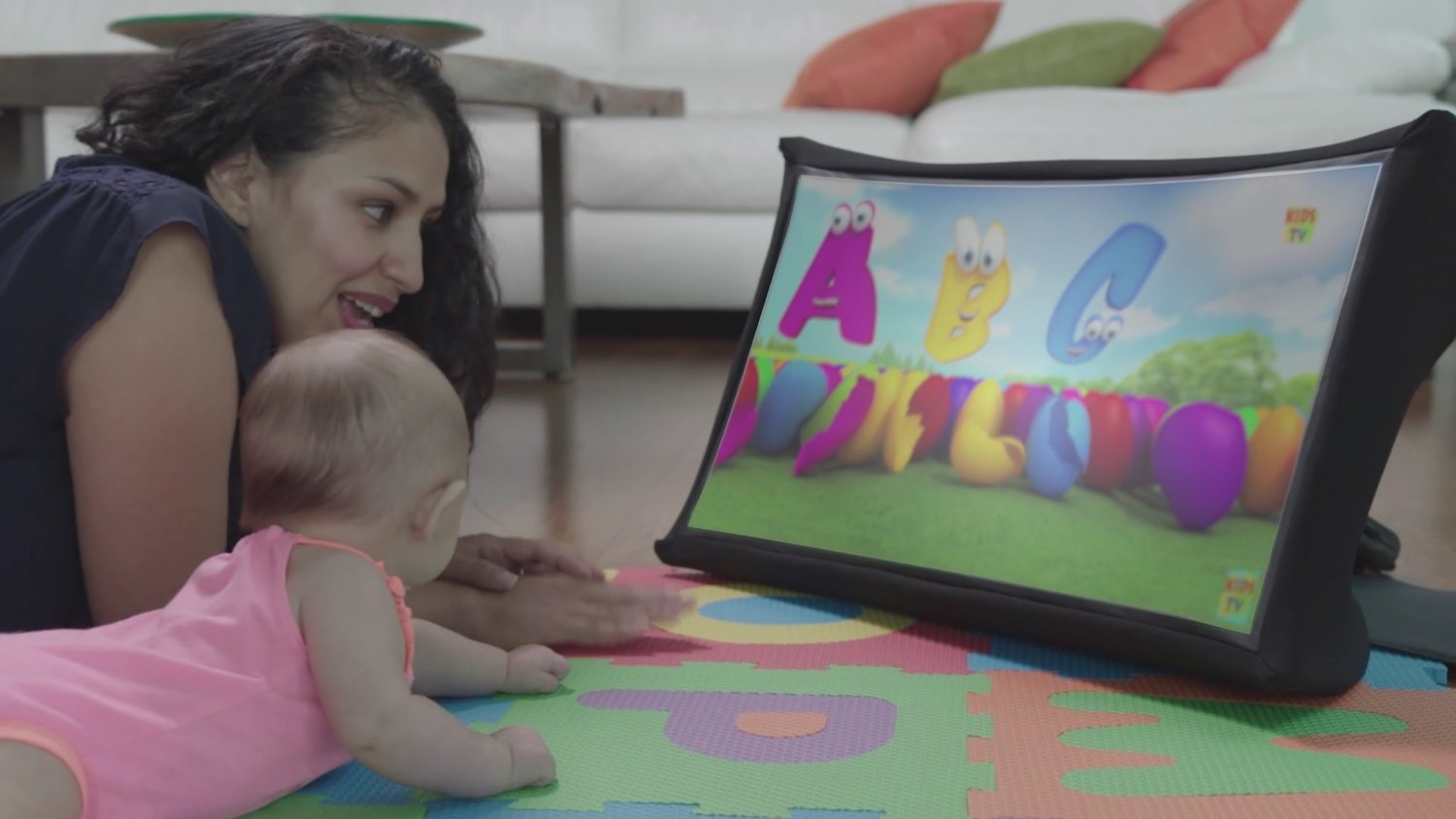 Unlike traditional projectors which rely on bulbs to power the projection system, SPUD uses three R/G/B LEDs which have a lifespan of 50,000 hours. This translates to 10 hours of daily usage over ten years before durability becomes an issue. Even with this technology however, the screen isn’t designed to be used in direct sunlight.

This gizmo may seem straight forward, but there is a lot going on under the hood; SPUD sports three patent pending technologies including a proprietary wrinkle free display.

So far SPUD has raised over $350,000 via Kickstarter—its goal was $33,000 and there is still well over a month to go in the campaign. The cheapest rewards have already sold out, but at the time of writing, you can still nab a pre-order for $384. Retail pricing is projected to be $499 with an estimated shipping date of June 2017.