Exoskeletons first made the transition from science fiction to feasible technology in military and industrial applications. These are domains in which there’s enough funding that $100,000 proxy frames make economic sense. But exoskeletons can also go a long way in helping the everyday person with paraplegia, muscular disorders and motor disabilities regain mobility, and SuitX hopes to make the technology available to them at much lower costs.

SuitX is a government and VC-funded startup created by Berkeley Robotics and Human Engineering Laboratory Director Dr. Homayoon Kazerooni. Most of the startup’s work has focused on building exoskeletons for military and industrial use. Stepping away from the diverse demands of robot construction in those contexts, Kazerooni set out to build an exoskeleton that does just one thing: help people walk again. This single-minded focus is apparent in every aspect of SuitX’s powered exoskeleton, the Phoenix.

The Phoenix consists of five basic modules: one for the hip, and two each for the knees and feet. Users are free to choose which modules they require based on the nature of their disability.

In order to leave as much heavy machinery out as possible, the only powered motors in the Phoenix are positioned at the hip module. In response to the user pressing the forward button on the crutch, the left side of the hip module moves forward, setting in motion a series of coordinated movements between the knee and feet modules, eventually resulting in a forward step.

At 27 lbs, it’s one of the lightest exoskeletons ever built. Happily for its users, the Phoenix can be worn while in a wheelchair, and has an interface that facilitates transitioning from a seated position to getting up and walking. The 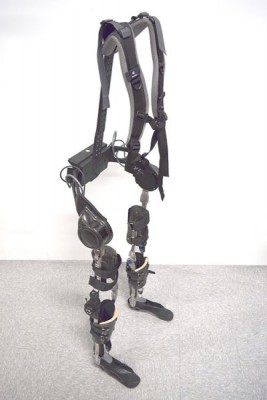 device comes with an Android app in which movement parameters can be set. Batteries on board can sustain four hours of continuous walking and last eight hours of intermittent use.

The best thing about the Phoenix, however, is its price point; $40,000 may not sound like a steal, but it is considering that SuitX’s closest competitor ReWalk prices its exoskeletons between $69,500 and$85,000. Scale and further research on minimizing the hardware will help drive its price down even further.

The Phoenix is available for order now via email and is expected to ship in March. The startup has already nabbed a grant from the National Science Foundation and just last weekend won the UAE’s Robotics for Good competition, which on top of securing them $1 million, hopefully means greater visibility and investment for the product.