Wearables aren’t just for humans. CES 2016 saw a burst in popularity for pet wearables. At the event was the debut of many devices that can attach to your pet’s collar in order to track both location and fitness activity. One standout was Buddy, a solution where the wearable isn’t an attachment, but rather the collar itself.

Buddy has been called “the Apple Watch of dog collars” as well as “a FitBit for your dog.” On the Buddy Indiegogo campaign, it is described as “the dog collar re-imagined,” and through that campaign raised $148,662 USD.

Buddy is a fully integrated LED dog collar with WiFi, Bluetooth, GPS tracking, a temperature sensor, an accelerometer, a rechargeable battery and a built-in OLED information display. It comes in a sleek design that look like something from the Starship Enterprise.

Created by Squeaker, a pet products company based in Melbourne, Australia, Buddy aims to keep your best friend safe by giving you a way to track their activity and location while keeping tabs on their health. Using the associated app (iOS and Android) you can create a virtual activity area for your dog (a “geo-fence”) that will alert you if they wander—all you have to do is draw and outline on a map.

Should your dog move outside the designated area, a Wi-Fi-enabled base station will set off LED lighting alerts. The GPS built into the collar allows you to see your dog’s location on a map via the mobile phone app.

If you own an Apple Watch, there’s also an app that allows you to control the Buddy’s lighting system from your watch, as well as track your dog’s health progress via integration with Apple’s Health app.

Buddy costs $250 and its estimated delivery is December of this year. 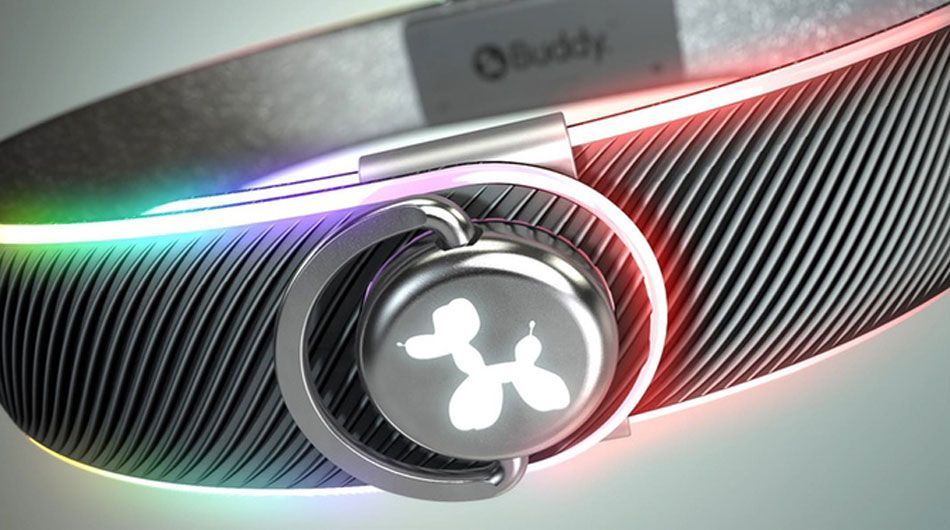 Tracy – Giving Your Dog A Voice

Tracy is a tracker that attaches to your dog’s collar. It claims to be the world’s first artificial intelligence accessory that lets you know your dog’s health, mood and more.

Like Buddy, you can use Tracy to track your dog’s location. Unlike Buddy, Tracy uses artificial intelligence to monitor your dog’s health, and give you tips on whether to visit the vet. It can even let you know when your dog wants to go out, or when your dog’s already pooping.

Movement is detected by a 3D accelerometer. As you keep using the tracker the AI learns your dog’s behavioral patterns and becomes more accurate. The AI monitors your dog’s sleeping, eating, and drinking patterns, then analyzes all the data on dogs of a similar breed in the Tracy database. All of this data can be viewed in the free iOS and Android app.

Tracy’s crowdfunding goal of $10,000 was met in 45 minutes, with $22,535 eventually raised by 80 backers.The Indiegogo campaign has now closed and backers are expecting to receive their products in October. The device will retail for $400.

A lot of dog owners feel guilty leaving their pups for 10 hours or more when they’re out of the house. Enter Furbo: the treat-popping dog camera that will keep you and your dog connected, no matter where you are.

Furbo wants you to be able to remotely train your dog for good behavior, correct bad behaviors, comfort them when you are away, and share awesome photos and videos of them on social media. Basically Furbo is a baby monitor for fur-babies; at it’s core is a camera that lets you see what your pup is doing at all times. The best part for you as the absent human is that you can give them a treat with just a press of a button on the Furbo iPhone app.

Furbo also comes with 2-way voice technology. You can get a push notification when your pup starts barking, loop in your voice and chat back, offering paws-itive reinforcement and comfort. Your dog won’t be able to see you making kissy-face, but they will be able to hear you. And for those late nights out? Furbo comes with night vision on its 720p HD Wi-Fi Cam.

Tomofun had one of the fastest growing crowdfunding campaigns in history, reaching its goal of $491,729 in less than 8 hours—that’s over 907% funded. The cost is $139 for one or $249 for two with the current promo running on Indiegogo. There’s also a September release on Amazon. 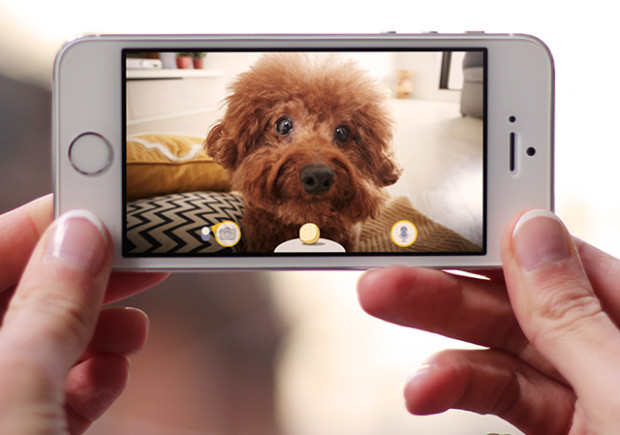 Zeppee is an app (iPhone and Android) recently launched in Australia, connecting hopeful new pet owners with their future four legged companions, one swipe at a time.

Zeppee claims to be Australia’s first and only pet connecting app where you can buy, sell and most importantly, find homes for pets. It was designed to cut down the time spent browsing multiple websites and visiting shelters. Listing is free and the app includes direct messaging.

Just like on Tinder, users are shown pictures of potential matches along with some details about the animal; personality traits, medical history, temperament, etc. When you see a pet that would be a good fit for you, swipe right. Want to keep searching? Swipe left. The app saves all your picks and organizes them by distance.

While Zeppee is primarily made for shelters, private users occasionally post after an accidental litter or if there’s an upcoming move that the family pet can’t make. In order to avoid backyard breeders and puppy farms promoting their animals, private owners are only allowed one listing.

As many as 54% of U.S. dogs are overweight or obese—and it’s not their fault; they don’t do their own shopping or feeding. Busy schedules can make caring for them complicated, and feeding on the run can lead to overdoing it. The ProBowl and the Obe iPhone app can help with that, as well as other tasks like replenishment ordering.

The ProBowl is essentially a scale that weighs the food or water you pour in. It connects via Wi-Fi to a smartphone app that allows you to monitor your dog’s eating over time. If at any time you over-pour, the bowl will turn red.

The app allows you to enter your dog’s details. When you’re shopping you can scan the labels on the food he or she eats. ProBowl personalizes a feeding schedule for you based on veterinarian recommended standards and your dog’s details. As your dog matures, ProBowl automatically updates meal recommendations so you don’t have to worry about changing metabolism or activity.

ProBowl monitors your dog’s eating and drinking habits, and alerts you if something changes. You can easily share this data with your vet. 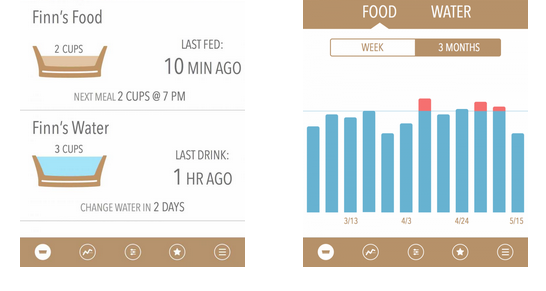 If you’re going out of town, you won’t have to worry about writing detailed instructions for your pet sitter; feeding instructions, including timing, are integrated into ProBowl.

One of the most useful parts about ProBowl is the reorder feature. ProBowl knows how much food you bought and how much your dog been fed. It reorders with plenty of time so you won’t run out.

Initially available at $138 for two, the Indiegogo campaign, which received $52,395 from 260 backers, has now closed. Delivery is expected for September. Watch for availability on Amazon.

GoBone – Smart Bone That Entertains When You Can’t

The GoBone rolls around on the floor to entertain your dog, opening up more options for play. Tap the GoBone twice to turn it on. Put the GoBone down and it moves automatically. The GoBone comes in four parts, and there are quick-release buttons to remove them when they get too dirty or need to be replaced.

Want to join in the fun? Take control anytime by firing up the free GoBone app, available for both iOS and Android devices. This turns the GoBone into an interactive gaming device for you and your dog with exclusive games like GoBone Fetch and GoBone Hide-and-Seek.

It wouldn’t be 2016 if you couldn’t record and share video of your pup having fun with the app, and of course see what others are up to in the social feed. So there’s that too.

The GoBone campaign is still live on Kickstarter with $186,144 pledged so far, surpassing their goal of $60,000. Delivery is estimated for December. You can pre-order now for $169.