With over 50 million users, valuations hovering around the $1.3 billion mark and exclusive bragging rights for the ubiquity of the “left/right swipe”, Tinder is a juggernaut in “online dating”.

I’ve used Tinder a lot and for the most part, it’s annoying.

For one, despite its barebones physical approach to matching, it’s actually exhausting to convert a match into a real date. You are perpetually fending off competing oglers, juggling multiple matches and churning out text messages that need to inspire, attract, sustain and engage. Leveraging Tinder to source meaningful connections often feels like getting your ass kicked in RPG more than it does ‘dating’.

But the biggest drag about Tinder is the total lack of preference control beyond basic gender. At a high level, anyone can and does sign up. Tinder is the fast food of online dating; quick, easy, addictive, cheap and more than likely, slowly killing you. So people swarm from all directions. And while healthy salads are available from time to time, much of the menu is grease.

Which would be fine if you could tell the app you don’t like grease. But at the ground level, you can’t do that and you are usually left swiping left for hours as the app spits you a steady stream of singles who safely qualify as “Not in a million years” and “Maybe during a plane crash”.

In November of 2014, Amanda Bradford launched a “curated” dating app called The League and unlike the current selection of more democratic dating apps, The League only accepts the most interesting and ambitious people. 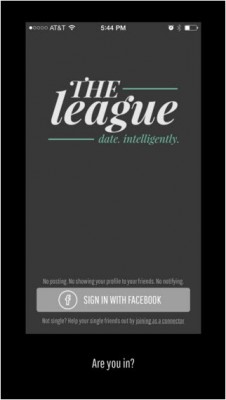 Presumably people that offer “Major League” benefits as a partner, as opposed to those stuck in the AAA Farm System of life. The app bears the slogan, “date.intelligently.”

Within only a few months and a few thousand Beta users, The League had recruited $2.1 million in funding from folks like IDG Ventures and Sherpa Ventures.

“The best universities curate students,” Bradford said to Business Insider. “Employers curate their employees. Work and school are the top places where 20-somethings meet each other. So it makes sense for a dating community to curate as well.”

Curating with what qualities in mind exactly?

According to Bradford, “I think if I had to boil it down into one word, it’d be ambitious.”

The League’s exclusivity has generated a waiting list that some are reporting as 100,000 applicants long. That is only with two active cities: San Francisco and New York. People impressive enough to have been accepted into the network are also given one VIP pass that they can use to refer their favourite eligible acquaintance – about 50% of the app’s users are referrals. Demand has gotten so high that apparently someone was caught attempting to sell their VIP pass on Craigslist for $100.

According to Bradford – which really is the perfect name for someone who founded an elite dating app called, The League – the selection process is based on an acceptance algorithm that evaluates social network data and LinkedIn profiles to determine fit based on things like age group, career focus, and I would guess words like, “Founder”, “Baller” and “Butlers”.

Though Bradford did say that The League is “less about pedigree and where you went to school and where you work and more about ambition and passion.” The key word of course being, “less”, rather than, “not”.

Right away the differentiation from Tinder is significant. Users know that the pool from which they’ll be picking is more likely to be saturated with “like-minded” singles; people that are greatly inspired by professional and financial achievement.

Then from published screenshots we also know that preference management options drive an additional layer of curation that anyone with a big degree and very little time will appreciate.

Users are able to define their desired traits in the following dimensions to pre-filter their matches: 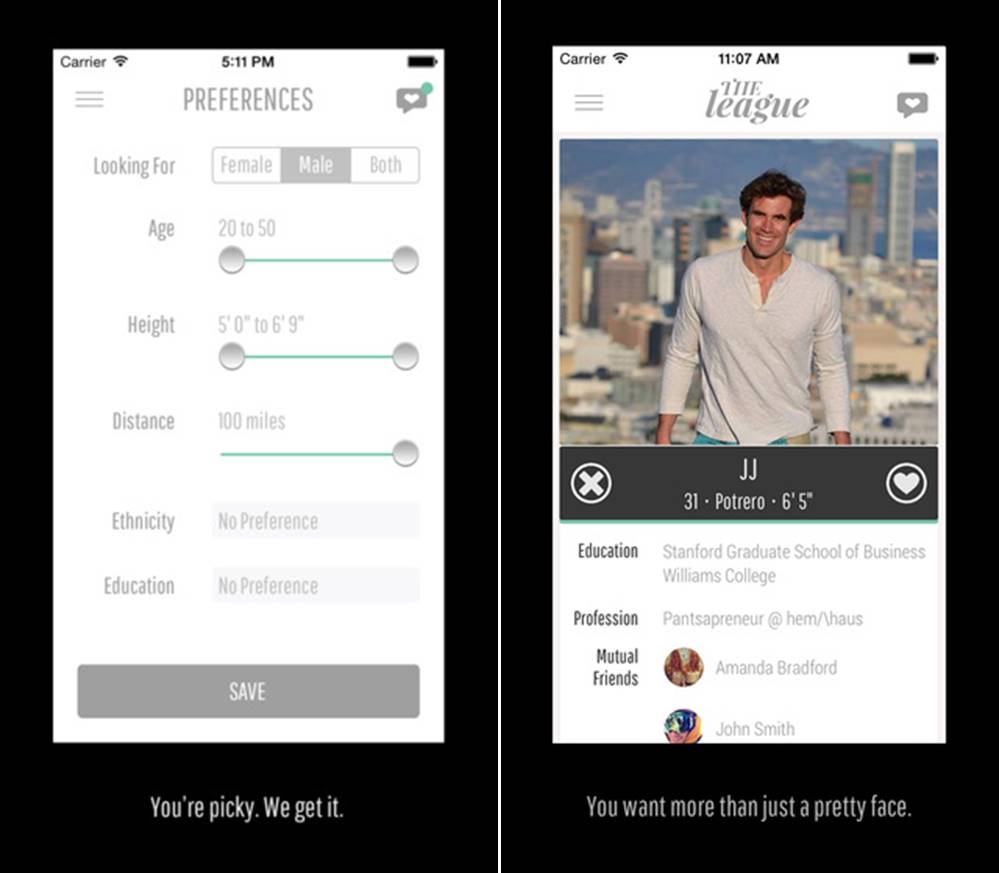 While casting the broadest net is certainly the road to the biggest bucks there is definitely demand out there for those bold enough to nab a niche. And while the trend isn’t as loud as the big names, it’s worth putting an ear to the ground and paying attention to some of the more effective and original alternatives. There are more niche dating tools online that you probably think.

Christian Mingle has around 10 million members.

As of earlier this year, FarmersOnly.com had close to 2 million registered users across the USA and Canada.

Just Salad, a restaurant in New York, launched their own dating app two years ago called Salad Match and Kraft just launched Sizzl, an Oscar-Mayer branded dating app for people who love bacon. Which may or may not be the exact opposite of JSwipe, the Jewish version of Tinder with now over 375,000 users.

Others get even more specific – perhaps too specific – and seem to be dwindling with time; GlutenFreeSingles.com for the health-conscious single or UniformDating.com  for singles who love stewardesses, soldiers and firemen.

Some are more effective than others, and there is something to be said for risk in such small numbers. But the point is that we seem to have hit a critical point in online dating where the once alluring quality of expansiveness is quickly becoming its most glaring and exhausting flaw.

Bumble gained over 500,000 users in less than year. It was founded by Tinder co-founder  Whitney Wolfe and it pretty much is Tinder except the women have to message first after a match, and matches expire within 24 hours. That’s it. Those are the differences. It’s going to be worth a lot of money. One of the biggest reasons is that because it’s newer and it’s slightly more nuanced than Tinder, the pool of singles has the impression of refinement.

People are still desperate to find romance. Singles are more single than ever and for a lot of them, the buckshot, big-base classics just aren’t cutting it. Don’t be surprised if more networks like The League, with more blunt “lifestyle” filtering tactics start recruiting some of the best players. And some of the best dollars.