Robots had me at C-3PO. A WWF Robot and the sea? Does it get better than that? Meet Thomas, one of the WWF projects helped by funding from Dolphin Adopters. Thomas is the product of a partnership that began in August 2015 when WWF-UK began working with the National Oceanography Centre (NOC) in Southampton and ASV Global to support the use of innovative robotic technology to explore ‘biodiversity hotspots’ in UK seas.

The Future of Marine Research

Lack of data about the marine environment can make it difficult to carry out effective marine conservation and management, such as the designation of Marine Protected Areas. Autonomous vehicles or ‘robots’ can help solve this problem, as they present a low-cost alternative to large research ships as a means of gathering data. 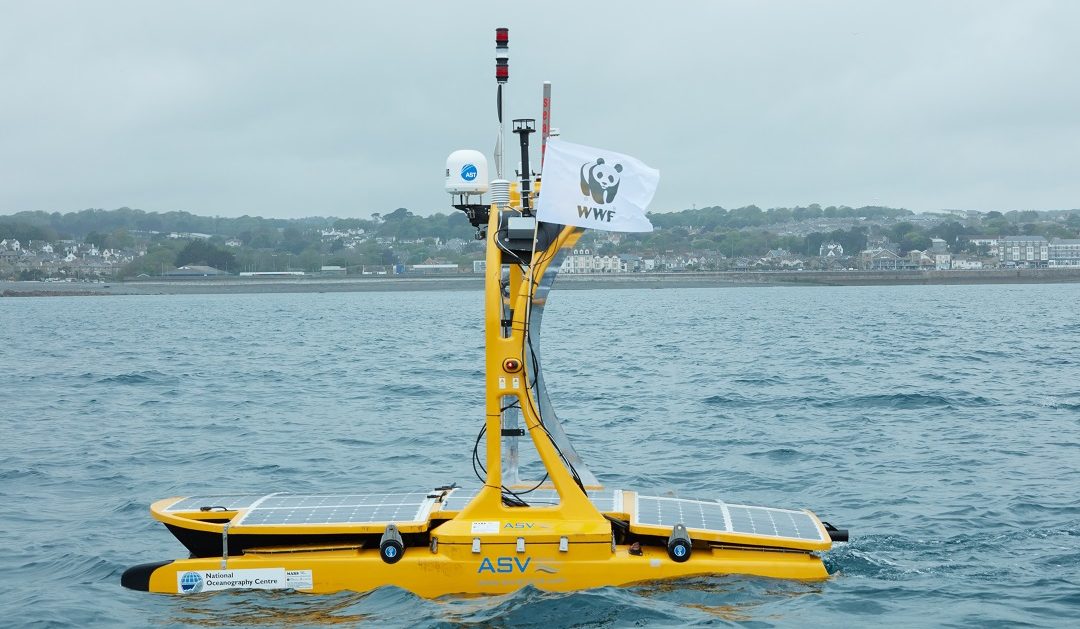 “Marine robotic technologies give us the opportunity to have a persistent presence in the ocean, and are changing the way in which we conduct science in the marine environment,” said NOC’s Prof Russell Wynn, who is co-ordinating the research for WWF. “The two vehicles on this mission (Thomas the robot and underwater drone, Drake) are bristling with novel sensors that will act as our eyes and ears in the water, observing and detecting seabirds and marine mammals. The vehicles will also be continuously collecting data about weather conditions at the sea surface, the temperature and salinity of the water column, and the distribution and abundance of plankton and fish prey.”

Thomas Suffers a Setback but then Gets Sat-Savvy

Thomas’ first mission was to set out from Milford Haven in Wales with his sidekick Drake the submarine glider aka underwater drone, but despite weeks of preparation, tests, and weather-watching, at the last minute Thomas met with some technical troubles, and the mission had to be aborted.

Fast forward to May 2016, and an upgraded Thomas was heading out from Newlyn, Cornwall to the seas around the Isles of Scilly. There, he’d hook up with Drake and together they would spend two weeks bringing the cutting edge of science to making sense of our changing seas.

Thomas was well equipped for his mission, with five cameras on board collecting images and video, both on the surface and underwater. Also, he was equipped with sensors to detect underwater noise that might come from vocalizing whales, dolphins, and porpoises, as well as measuring temperature, salinity and chlorophyll levels (used as a way of measuring the amount of plankton in the water). 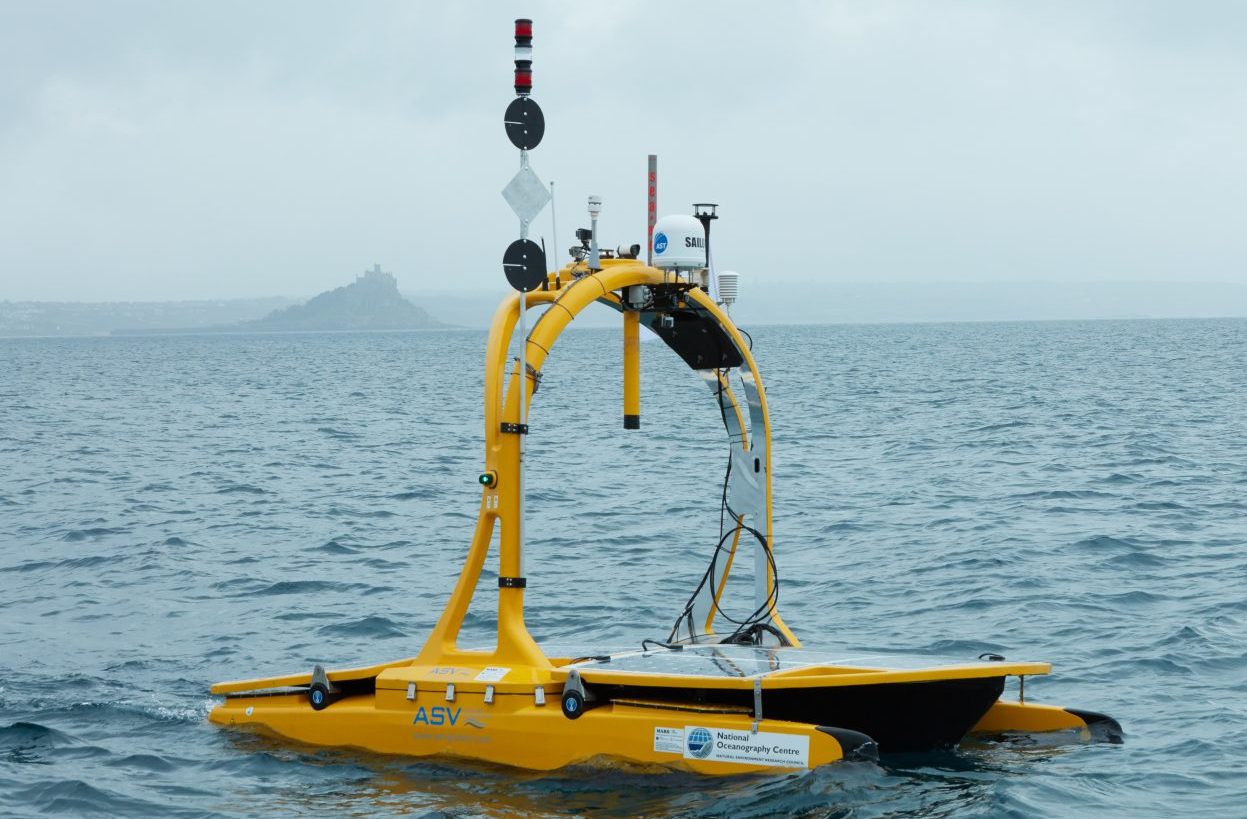 One of the upgrades was in Thomas’ connectivity – he could now send back the images collected in real-time by satellite. The technical team and scientists back at ‘mission control’ in Southampton could now use the information in the photos as well as from the scientific data to make continuous adjustments to where Thomas and Drake would go to collect the most relevant information. With Thomas on point, Drake could move up and down, diving in the water column to enhance the information from Thomas and giving a truly 3D picture of our seas.

Science in the form of Thomas and others of his and Drake’s kind has never been more necessary. “Our seas face a growing threat from the impacts of climate change, on top of increasing pressure from a range of different marine activities competing for space and resources in ever busier seas,” Dr. Lyndsey Dodds, Head of UK & EU Marine Policy for the WWF in the UK, told SnapMunk. “Climate change threatens not just the animals that call the ocean home, but all of us. We depend on our seas for food and energy, leisure and well-being, and for its role in maintaining a stable climate.”

“As we pump out more carbon dioxide into the atmosphere, more is sucked up by our oceans. This means their chemistry also begins to subtly change, becoming more acidic,” Dr. Dodds explained. “This phenomenon, known as ‘ocean acidification,’ is perhaps the greatest threat facing our seas. Animals that use the minerals in the ocean to form their shells or skeletons, such as mussels, oysters, corals and plankton, will find it increasingly difficult to do so.” 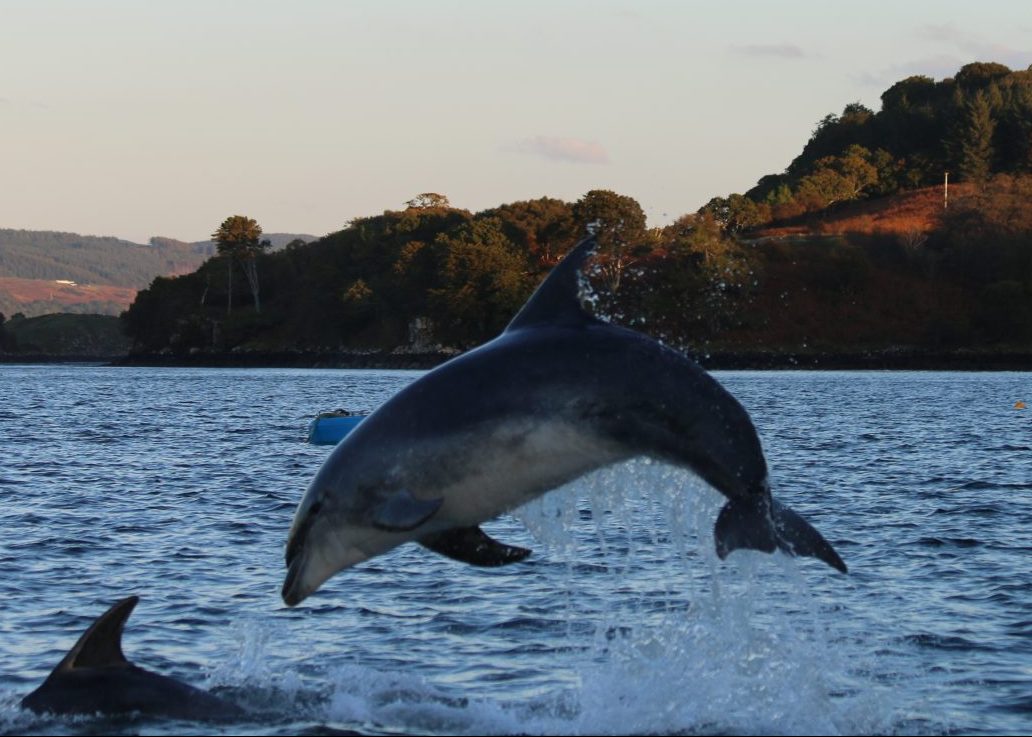 “The potential impacts of climate change are vast, varied and complicated and there is still a lot we don’t understand. Because of this, we should take a precautionary approach and ensure that we are doing all we can to reduce the impacts while also building resilience in the marine environment through ensuring they are properly protected,” she continued.

The WWF approach is that the seas need to be managed in a better way so that they can adapt to climate change, an approach that requires all users of the sea – including fishermen, shipping firms, surfers and energy companies – working together.

“With each mission more is learned about robots and what can be achieved as well as learning more about our seas. We seem to be getting closer to a future where robots or autonomous vehicles will be able to monitor and survey seas around the world in a cost-effective way, giving us the information we need to ensure we properly protect our seas and manage the activities that impact upon them,” said Dr. Dodds.

Expect to see either Thomas or other autonomous ocean-going vehicles, off the coast of developing countries, bringing science to some of the least-studied areas of the ocean, enabling them to develop more effective conservation and management plans.