Superbook has taken Kickstarter by storm with their viral crowdfunding campaign. Its modest $50,000 goal was shattered within ten minutes of launch and passed the $150k mark just an hour later. With about three weeks to go, the campaign is well past $1M. It has exceeded all of the original stretch goals, allowing for product improvements the team thought would have to wait for post-launch profits.

Created by software-focused startup Andromium, this project is the company’s second foray into both smartphone enhancement technology and crowdfunding. They previously launched a hub that allowed users to plug in their smartphone, a TV or other monitor, a keyboard, and a mouse, allowing all of the separate hardware to tap into the phone’s processing power and simulate a laptop-like experience.

All of the cords and separate components proved unwieldy and unwanted, so Andromium dreamed up the Superbook. It’s basically a netbook without a processor or memory storage. A single USB cord connects to your smartphone. The phone-bound Andromium OS makes your phones apps and files easy to see and use on the Superbook’s larger screen. The keyboard and the trackpad work, well, like a keyboard and trackpad, of course. 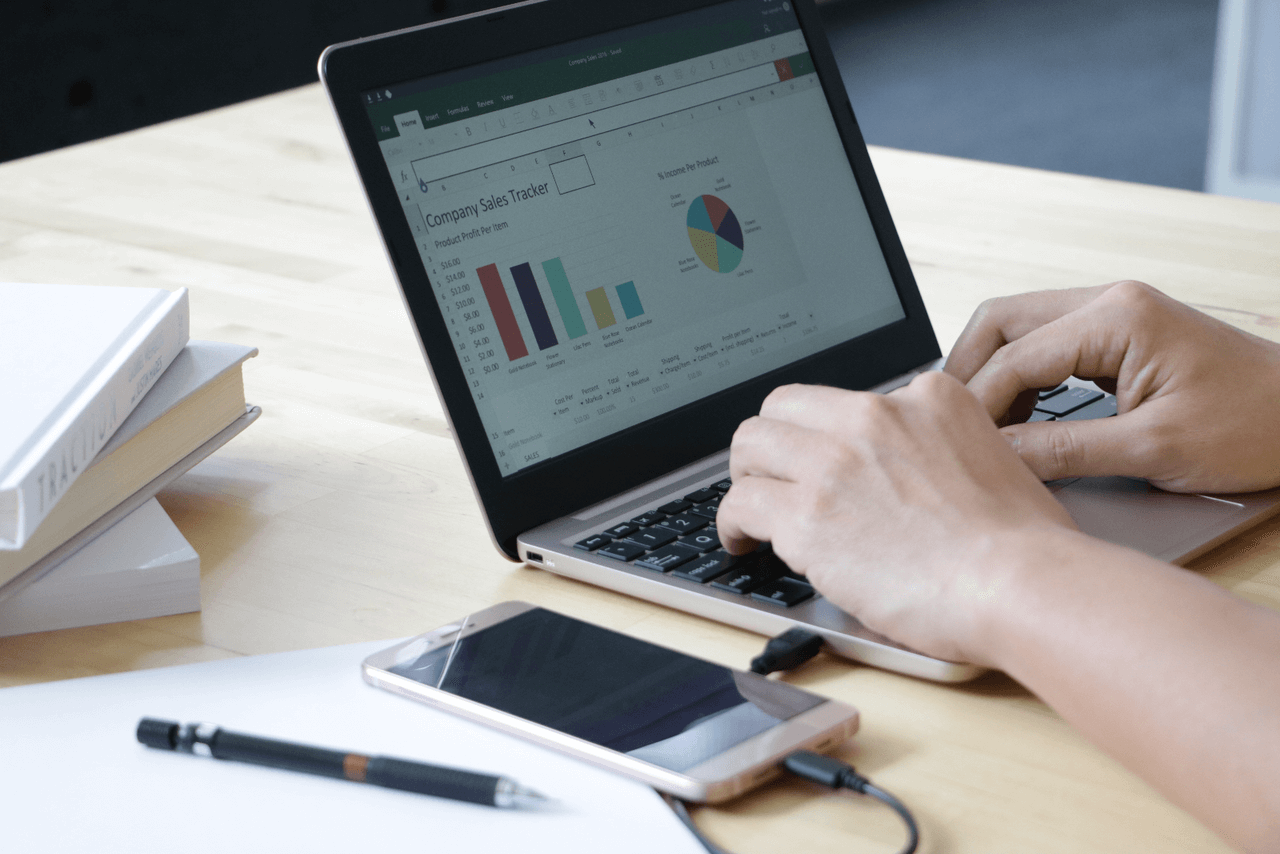 Turning your smartphone into a fully-fledged laptop makes a lot of sense for a lot of reasons that others have gone into elsewhere. The product is also a steal at $99. One does wonder what this and similar competitors (and there will be competitors) will do for mobile data plans, but that’s a problem for down the road. For now, the question is: how did this thing get so big so fast? Let’s take a look at some major pieces of their Kickstarter campaign and see if we can tease out a secret or two.

A story about the Superbook and its impending crowdfunding campaign appeared on The Verge ten days before the project went live on Kickstarter. This, combined with other outreach to colleagues, peers, and wealthy long lost uncles in which Andromium no doubt engaged, set the stage for the explosive interest the campaign saw on Day 1. The days after that have carried the momentum; donations have averaged around $120k per day since launch.

When you have a killer idea, get press, and some visually attractive marketing assets if possible, before you start asking for money. Contact media folks and see if you can get them interested in your idea. Writers like me want cool stories and innovative products to talk about, so it’s a win-win as long as you have something legit (no potato salad recipes, please).

Get to The Point Fast: Guts Over Glamour

Andromium knows their customers, and they know this pitch is not so much asking for donations as it is pre-selling a product they (should be convinced they) need. So they took some tips from Digital Marketing 101 and set the perfect tone for their crowdfunding campaign right off the bat: everything the consumer wants laid out neatly, concisely, and eye-catchingly “above the fold,” without making anybody do any unnecessary scrolling.

The experience starts with the product video, which is not technically but strategically all but a requirement for every Kickstarter project; according to Kickstarter, 50% of campaigns with videos succeed, compared to only 30% of those without. The video quickly introduces the problem Superbook solves and the product itself. There is no rambling about how excited we should be. There is no pseudo-charismatic founder telling introducing themselves and their company. There is no baiting and there is no hype. There is a clear product and a clear solution.

There is also straight-forward, un-sexy imagery that tells you almost everything you need to know in a glance. The preplay screen for the video is perfectly designed to create an instant visual understanding of what the product does. If you don’t have time to watch the first 20 seconds and get an explanation that way, you still get a pretty good idea of what Superbook is all about from a single still.

Right underneath the video is a two-sentence elevator pitch that perfectly sums up why customers might want a Superbook, without any fluff, hype, or other bullshit meant to intrigue and keep people scrolling. You don’t want people to scroll, you want people to click the “Back This Project” button, and here’s how to do it:

“The Superbook is a shell that turns your Android smartphone into a complete laptop. Get the freedom of using just one computer.” 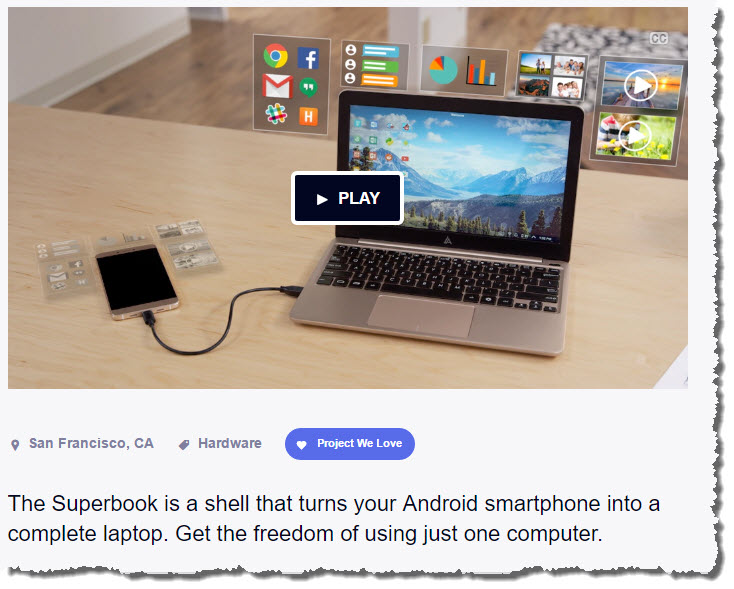 Bam. Here’s what our product does, here’s how it makes your life better, now donate and get back to watching unauthorized Prince tributes on YouTube. Or at least, that’s how I interpret the subtext here. 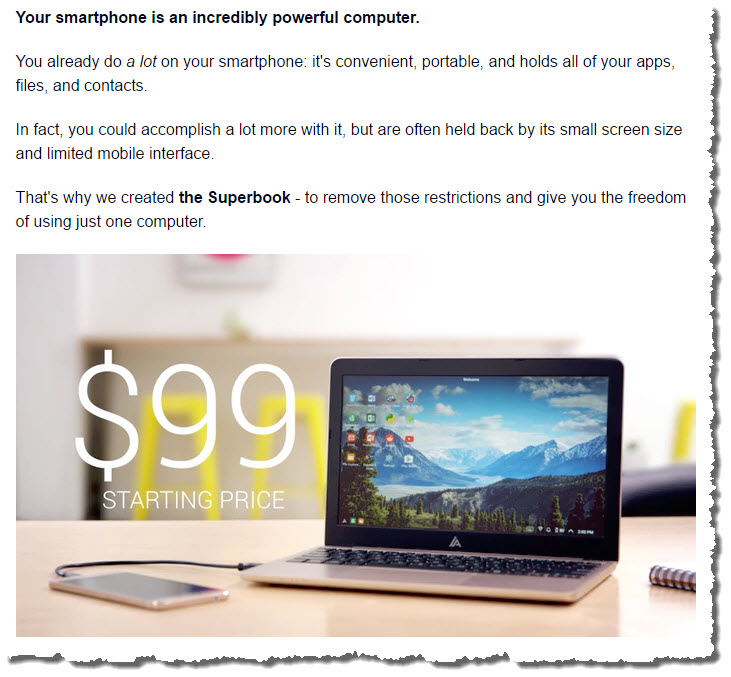 Your project is a product. Tell your customers why they want it—why they need it. They don’t give a shit about you unless you’re making something that improves their life (and maybe not even then), so introduce the product quickly and clearly. Don’t try to generate hype before telling people what they get. Talking first then dropping the mic is a far more effective strategy and one much more likely to get you a spot in the viral crowdfunding campaign hall of fame.

Price Wisely, Not Widely: A K.I.S.S. For Your Consumer

Going back to that, “you’re selling a product” concept, Superbook’s price point is perfectly matched to its consumers’ wallets. With a main goal of getting their software on the most number of devices, they’re selling the hardware at only slightly above cost. That enables them to hit a sweet spot where customers know they’re going to get real value in return for their investment.

Early birds got to pre-order a Superbook for $85, and everyone else can still grab one for $99. For just $25, you get membership in Andromium’s beta group to get OS updates, new features, and more—you just have to use your own hardware setup to turn your Android into a desktop/laptop. You can donate more to get an upgraded Superbook and other extras, but there aren’t 30 different donation levels from which to choose,  distracting consumers from the bottom line value.

Too many choices turns buyers off, undermines attention, and lowers the odds of virality through referrals. Andromium is keeping it simple and offering discernible value enhancements at each price point. Instead of making it easy for people to donate whatever amount they wanted, Andromium set realistic prices for each upgrade, making it easy for people to choose what they want to buy.

Andromium set a very modest baseline goal with more ambitious but still in-the-ballpark stretch goals. $50k isn’t so low that we question why they’re doing a crowdfunding campaign in the first place, but it’s not so high that we think the project has little chance of success (they probably could have started with a goal several times higher and still done fine; YMMV). Any time a crowdfunding goal is hit, consumers are more likely to start piling on. Successful funding means (presumably) that the company will be able to deliver on its promises. Diminishing the perceived risk of failure is a major milestone on the way to virality.

Again, it goes back to selling the product—a real tangible product that is eventually in someone’s hands. A campaign that looks shaky is less likely to attract customers. A campaign that has already met its goal looks like a solid bet—customers feel like they’re buying something when they back the campaign, instead of simply rolling the dice.

Figure out how much you actually need to get your project to the next level and price based on that rather than fantasies of startup prestige. Maybe tack on an extra 10-20% to hedge for complications, or go up a few multiples if you have actual market research telling you demand is high enough (your roomates don’t count as a focus group). Just don’t shoot for the moon on your first try. Give your campaign a target you can realistically hit and that will give you the capital boost you need to build and deliver. If you manage to fund that goal by 2800% (and counting), well, super!