We only have one world, and every year new green startups emerge to provide new technologies and services to help fight the problem. So many so that we made a list of new green startups that are creating solutions for the planet.

Founded out of Princeton University and Northwestern University in 2003, Costa Mesa, CA, based Newlight Technologies has developed and commercialized a carbon capture technology that combines air with methane-based greenhouse gas emissions to produce a polyhydroxyalkanoate (PHA)-based thermoplastic plastic material called AirCarbon™. Described as a huge step forward for the bio-economy, the company last year signed a major partnership with IKEA for a 10 billion pounds production license.

Under the agreement, IKEA will purchase half of the AirCarbon material from Newlight’s 23,000 ton per year plant in the United States. After this, IKEA has the exclusive rights in the home furnishings industry to use Newlight’s AirCarbon thermoplastics in its range of home furnishing products. The long-term goal is to develop Newlight’s production capacities to a large-scale 453 KTA or 1 billion pounds per year. Financial details of the deal have yet to be announced. The company is currently financially backed by METRIX Capital Group.

More than 660 billion pounds of plastic is produced per year, with the manufacturing process itself creating three times as much carbon dioxide by weight as actual plastic. “That’s an insane amount of material,” said Newlight Technologies’ CEO Mark Herrema.

The UN Food and Agriculture Organization (FAO) reports that 40% of the world’s food depends on irrigation, which accounts for almost 70% of fresh water used – making water management #1 on many farmers’ to-do lists. In Israel where water scarcity is a way of life, Tal-Ya focusses on growing more food with less water – utilizing their reusable plastic trays that can capture dew from the air.

Mickey Chesla, Tal-Ya’s vice president of marketing and sales, said the trays can reduce water use by up to 90% although 50% is more typical of their results. They can also reduce fertilizer use by 30% because the trays direct the nutrient straight to the plant’s roots.

The patented 28- by 22-inch recycled polypropylene trays cost $3-$5 per piece. The trays work by covering the plant’s root system, directing water and fertilizer directly to the root, while protecting the earth around the root from weeds that would compete for water, and extreme temperatures. The trays are supposed to last for 10 years.

Since its inception in 2005, Tal-Ya (which means ‘God’s dew’ in Hebrew) has served farmers in Israel, the US, China, Chile, Georgia, Sri Lanka and Australia.

Rubies In The Rubble

London-based Rubies In The Rubble literally and figuratively fights food waste with relish, creating ketchup, relishes and jams using the surplus fruit and vegetables from UK farms that would not be sold otherwise for being too ripe, the wrong size or ugly. “Others see rubble, we see rubies,” proclaims their Twitter account.

The stats on food waste are frightening. One-third of the food the world produces is wasted through inefficiency. In the UK alone, each person on average wastes £200 worth of food a year, with food waste adding up to 7.3 billion tons per year, and 40% of British crops rejected by supermarkets. 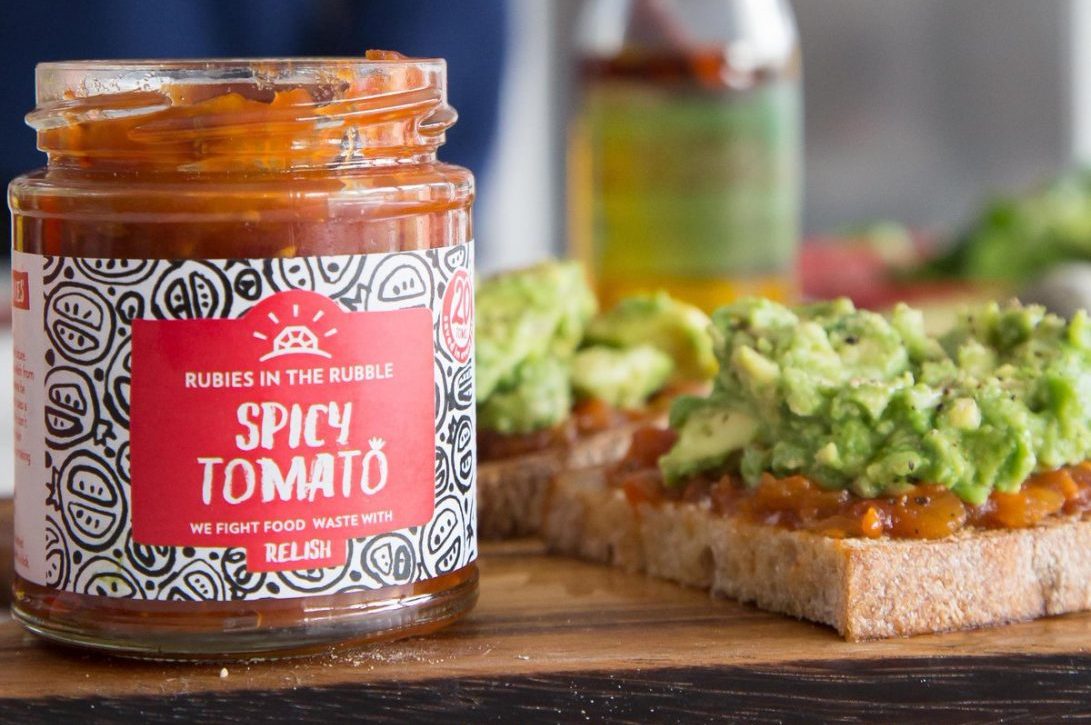 After working in the finance industry, Jenny Dawson, co-founder of Rubies in the Rubble, became obsessed with food waste and the need to address the supply chain issues that cause it. Her mother’s chutneys inspired the business. “Growing up I always had a larder full of chutney, and different ones would come out every mealtime to liven up the meal,” she said.

“Food waste isn’t rubbish,” emphasized Dawson. “Part of the problem is that we call it food waste and it’s just inefficiency in the supply chain. It shouldn’t be called waste.”

The average adult breathes 3,000 gallons of air every day, but depending on where you live, breathing could be hazardous to your health. The BreezoMeter app tracks pollutants and determines air quality around the world. Its big-data analytics platform uses local air monitoring sensors to gather real-time pollution data, helping over 50 million people make informed decisions about when and where to go outside with accessible, hyper-local, and real-time air quality data – on their smartphone.

According to the World Bank, air pollution now ranks as the deadliest form of pollution, and approximately 90% of the world lives in places that fall short of the World Health Organization’s air quality standards. The cost to the global economy? About $225 billion annually.

“Because air pollution changes more often than weather and is more localized, the solution could be very simple if only you knew the air pollution around you,” explained Ran Korber, co-founder, and CEO of Haifa-based BreezoMeter. “It’s very simple to avoid air pollution if you can measure it.”

Led by the Sustainable Ventures management team, the London-based Sustainable Accelerator aims to support the UK’s best sustainability startups and is currently raising a fund via Seedrs. Seeking an investment of £600,000, it has already raised £635,100.

The Sustainable Accelerator Fund will invest between £50k – £250k into around 10 high potential sustainability businesses, providing a year-long program of expert mentorship, network introductions, fundraising support, and growth services. Companies also gain access to Sustainable Ventures’ suite of Portfolio Services during their year-in-residence and are encouraged to leverage them alongside the Accelerator program. While the Sustainable Accelerator intends to invest in all kinds of sustainability companies, it is bullish on certain verticals, namely: Circular Economy, Clean Air, Future Utility, Social Impact and Building Tech.

In addition to the funding on Seedrs, governmental body London Waste and Recycling Board will be investing £300k alongside the crowd into the Sustainable Accelerator Fund.