If you’d like to put your Farmville skills to the test in the real world, I’ve got just the service for you.

Indonesian startup iGrow lets regular folks contribute to the growth and upkeep of farms and their crops without ever having to handle a plow or a pitchfork. The platform creates a way to easily invest in and track the growth of a variety of fruit-bearing trees and legumes, while later recompensing investors with a portion of the funds gained from selling the harvest.

Each crop has a different contract period associated with it depending on how long it takes for the trees to begin bearing fruit and how long they can sustain it. Investors are given an estimated return on investment per year for each crop along with the expected harvesting period. 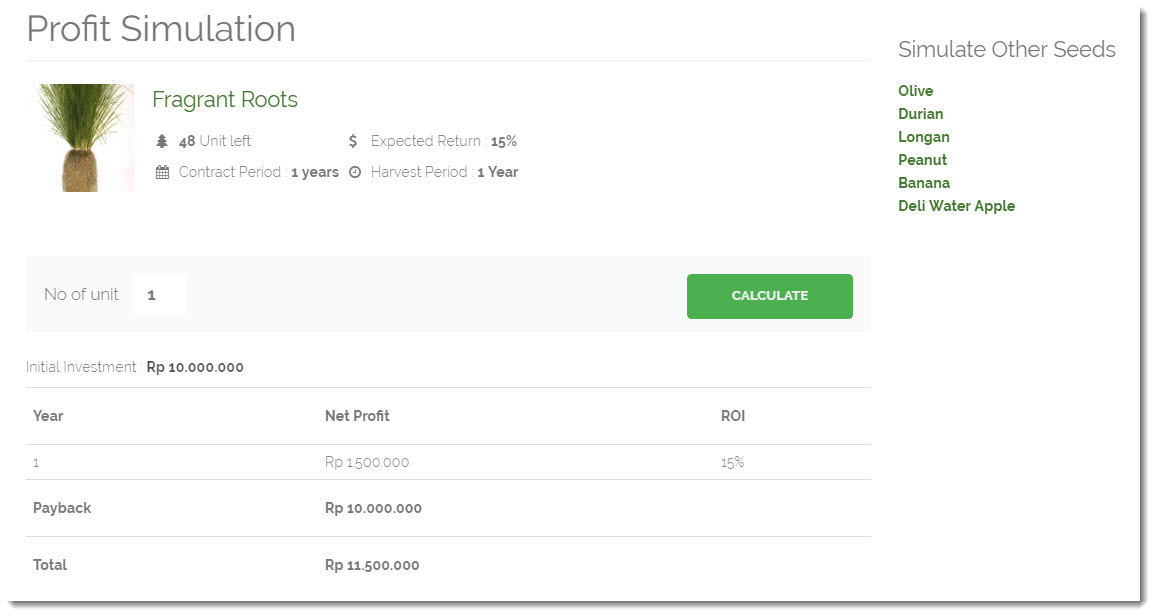 As you’d expect, the startup channels investments to the farmers, who in turn put the crops through irrigation, fertilization, and harvesting. During this period, supervisors visit farms to keep tabs on the development of the trees and the amount of carbon dioxide they’ve each absorbed. Sponsors can view this information through an online dashboard.

Once the process is complete, iGrow uses its network of distributors to sell the harvest, and returns are split between farmer, sponsor, and iGrow. Returns don’t always come in a hurry, of course – it takes four years before longan trees begin to bear fruit; durian trees take five years. When the profits do begin to roll in, 40 percent is apportioned to sponsors; they can choose whether to receive their return on investment, or have it donated to nonprofit organizations partnered with iGrow.

So far, iGrow has managed to fund crops planted on over 1000 hectares of land, sponsored by almost 3000 people; 2000 farmers are currently on the platform. The acceptance it’s gaining is especially significant considering the challenges faced by the farming community today.

According to the FAO, food production will need to go up by at least 70 percent in order to support the needs of the additional 2.3 billion people who will populate the planet by 2050. In order for that to happen, 120 million hectares of arable land needs to be created. While increased farming is essential to sustaining our needs, the number of farmers is dwindling.

Studies show that farmers comprise a mere 1 percent of the American population, a steep drop from the 40 percent representation they had in 1900. To add to that, more than 25 percent of farmers are over the age of 65, and just 5.8 percent under 35. The paucity in dedicated agronomists is serious enough that we’re probably going to need some robots to fill in.

iGrow is doing its bit to help ensure farming maintains a human touch – a solution for which it has garnered plenty of acclaim.

The startup placed second at the Startup Istanbul 2015 Challenge, and won top honors at Startup Arena Jakarta 2014. Its most noteworthy plaudit came just recently, when it was accepted to 500 Startups’ Batch of 2016. iGrow’s time at the accelerator will be consequential not just for the startup, but for farmers in Indonesia and beyond.