The alarm clock has been thrust front and center in our daily battle against groggy mornings. As a result, waking people up on time has become big business. Entrepreneurs have tried to do it using math problems, dumbbells, bacon scents, and even slaps to the face. But maybe we’re doing it wrong. Maybe we should also be focusing on sleeping better instead of just finding more palatable ways to wake up. That’s the approach that Kello takes— it’s an alarm clock that doubles as a sleep trainer.

Kello’s journey began at the Brinc IoT Accelerator, a hardware accelerator based in Hong Kong. The team went through sixty iterations before arriving at the final design for the product, which can be described as comely and minimal, although maybe a bit prosaic. Functionally, the device is three very different things combined into one: an alarm clock, a sleep trainer, and a connected smart home device.

As an alarm clock, it aims to wake users up using what they deem is the best audio alert for the job. Integration with apps such as Spotify, SoundCloud, Deezer, Tidal, and vTuner has been included to make that possible. Additionally, the device comes pre-installed with a variety of nature sounds, so you can choose whether to wake up to Welcome to the Jungle or actual sounds from the jungle.

Kello’s most interesting feature is the sleep training it claims to be able to do. The instruction is delivered through what they call, “sleep programs,” which are effective techniques for more restful naps vetted by scientific studies. There are a number of these plans from which you can choose based on your personal sleep goals. For instance, one focuses on falling asleep in half your usual time; the system, using a dynamic visual display reminiscent of a StairMaster, guides you towards the “perfect-for-sleep” 6 breaths per minute.

Another sleep program is called, “Wake Up Earlier, Without the Struggle.” It’s based on a study titled, How To Get On A Sleep Schedule published by the National Sleep Foundation. The plan helps users wake up earlier by preponing the time at which the alarm goes off each day by a small amount of time—every day, it’s just a little bit earlier. Eventually, you’ll be waking up significantly earlier thanks to the small improvements made over a longer period of time. Kello’s other sleep programs help with avoiding fragmented sleep, fighting jet lag, and more. Additional guides will be introduced in the future.

Kello also functions as an IoT device. Double-tapping its upper surface can be used to trigger various other smart devices. IFTTT and SmartThings compatibility can be taken advantage of to, say, alter the bedroom temperature when it’s time to go to sleep, or activate a smart coffee brewer when the alarm goes off. The promise of a quick cup of coffee first thing in the morning is enough to get many of us jumping out of bed eagerly. 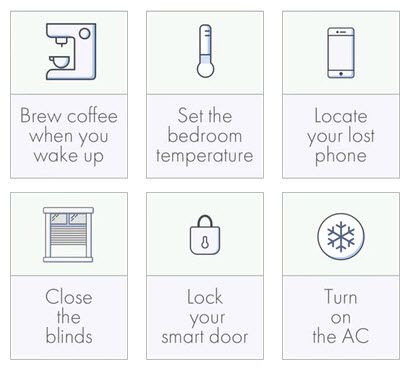 Everything from setting the alarm time to configuring the connected features can be done using the Kello smartphone app on Android or iOS. But possibly the best aspect of using the device is that you don’t need your phone by your side once you’ve configured everything in the app. That’s one fewer distraction—and a big one at that—each night.

According to BCC Research, the sleep aids market was worth $54.9 billion in 2013. By 2019, it’s estimated to reach $76.7 billion. The promising future for the industry has invited the interest both of entrepreneurs who believe the solution lies in technological innovation, and those who prefer natural remedies. The former includes the creators of products such as Sleep Genius, the Aura by Withings, and the Sleep Infuser. Alternative approaches include acupuncture, meditation, and roots such as valerian. Also in the mix are sleeping pills, which have been shown to be a popular choice.

Evidently, Kello has stiff competition to contend with. It has, however, managed to find traction through crowdfunding. Its Kickstarter campaign has amassed more than $227,000 ($50,000 goal) with the help of more than 1,900 backers—there are still more than 3 weeks left in the campaign. All too fittingly, the “early bird” units have sold out. You can now pre-order a Kello for $109, which is 27 percent off the expected retail price.