It takes too much talent to compose good music and too much know-how to produce it. Thankfully, the musically challenged among us can now get a little help from our artificially intelligent friends. With more than three years of R&D and extensive sample libraries under its belt, Amper has created a way for anyone to compose original music using AI-backed software. Investors also think that’s friggin’ awesome, which is why Amper is richer by $4 million post its seed funding round.

To make composition as simple as possible, Amper lets users work with pre-defined styles of music and modularized instrument groups which can be integrated into tracks with one click. Compared to the years of practice that goes into learning to play an instrument, that’s really simple.

Amper starts off by asking for a choice of genre for your AI-enabled masterpiece. Right now, four broad styles of are available: Classic Rock, Modern Folk, 90’s Pop, and Cinematic. Within the chosen genre, you’re asked to pick a mood for the piece. Some of the options under the 90’s Pop genre are Exciting, Playful, Sad, and Driving (whatever that means). The moods for the Cinematic genre sound a little cooler: Dramatic Tension, Epic Percussion, Dark Atmospheric, and other options that sound like Hans Zimmer’s brief for the Dark Knight theme.

In the next stage, the software goes into a little bit more detail. There are various options for the kind of instrumentation desired under the ‘Custom Band’ tab. There, you can choose whether you’d like to include certain percussive elements, or leave out the synth, or keep the synth and leave out the keys, or….you get the idea. Then you pick a tempo and duration, and you’re ready to render the piece.

If you like what you hear, Amper lets you download the music in MP3 or WAV formats. If not, you can either tweak the input or just ask the software to produce a different piece of music within the same input parameters. 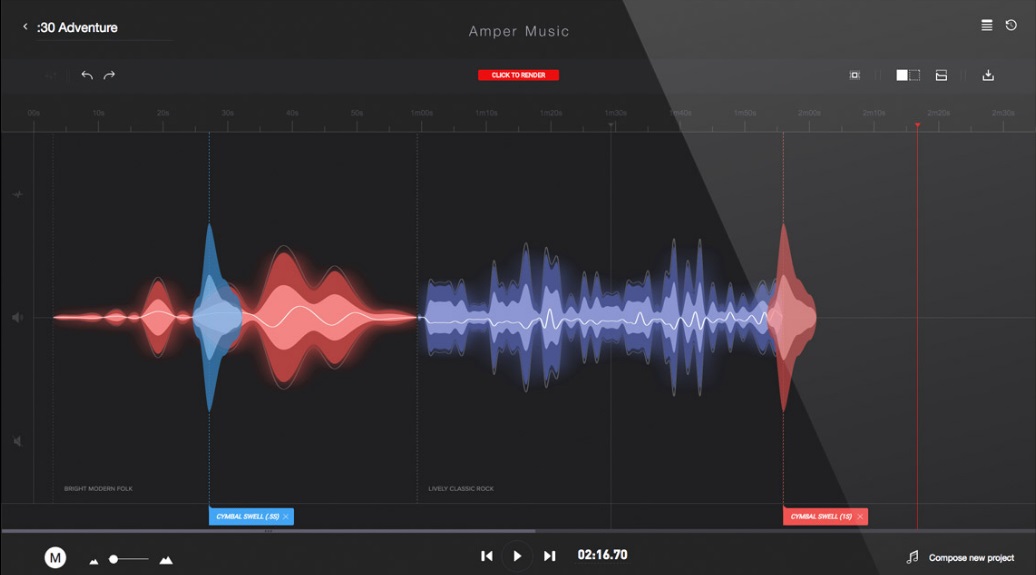 Although it may seem like another case of machines taking human jobs–in this case that of music composers and producers–Amper is meant to serve as a tool for collaboration between the two factions. In fact, founders Drew Silverstein, Michael Hobe, and Sam Estes are Hollywood music composers who “are not investing in Amper because we believe AI will replace people; we’re investing in the collaborative effect AI has on human productivity.”

As of now, the software is being aimed at both individual content creators looking for affordable royalty free music, as well as big publishers needing an easy way to beef up their repertoire of stock tunes. Amper currently names Hearst Television and Associated Press among the list of clients using it as a tool for music creation and production.