Launching a social network into an already crowded space is not for the faint of heart, but that is exactly what new entrant FANS has done. Specifically, they’re enabling a new network for the most passionate music fans. It’s a move that has been made before, and one that has resulted in little less than a little extra noise. As soul-soaked as the music space is, nobody seems to have cracked the nut of merging it with the similarly addictive experience of social media. Perhaps what the space needs is a new act?

Described in the New York Times as, “a place to talk about concerts,” FANS, according to its website,  “is an online community and a tool for music-lovers to embrace their enthusiasm for live concerts, celebrate their music history, discover new experiences and connect with like-minded FANS around their favorite artists.” FANS claims to host the most comprehensive database of concerts—past, present and future—and empowers users to search and build their fan identity through almost 5 million events, 1 million artists, 380,000+ venues and 300,000+ albums.

Music people can be finicky. So can software users. It’s hard to know if FANS will be able to find a flourishing space that relies on both. I set out to explore the musical social media scene and find out where they may fit into the lineup.

The key appeal of Whyd was to be that it enabled music lovers to find and play very specific versions of songs that they love, and are not available on major music platforms such as Spotify or iTunes—like rare remixes, DJ sets, bootlegs and epic live performances.

Earlier this month, in what is certainly a social network first, the service announced that it was transferring software ownership to their community to focus on…drumroll please…hardware development. According to the Openwhyd app page on iTunes, “As Whyd is evolving towards the creation of an innovative sound system, we’ve decided to hand you the keys of Whyd’s music social network and make it open-source. Whyd is now Openwhyd!”

“Our community is very passionate about music and we are committed to fully supporting them with Openwhyd going forward. We are excited to see what the community will build next,” stated Gilles Poupardin, co-founder of Whyd. Co-founder Jie Meng-Gerard added, “After years of listening to our community and what they really wanted, we are now moving forward to reinvent the speaker and bring it to market.”

The development team will initially be restricted to a group of the most loyal Whyd users, and will later open to all users that wish to participate. If you’d like to be part of the reinvention, on either side, you can get involved by filling out this form.

The speaker design is worth checking out as it is rather cool. Opensource Openwhyd may be cool too. Time will tell. In the meantime, however, if you’re a fan of the Dead you might want to file this one under “Not Fade Away.”

Think of it as Tinder for lovers of tunes. Tastebuds, an app from a dating site based in London, matches people based on their music tastes.

While a recent review states that Tastebuds, “Has carved a solid space for itself in the dating industry,” other reviews have not been as kind. For instance, one provided this imagery: “Think of Tastebuds as an Ello that costs money: you’re not sure why you’re on it and you’ll be damned if you get caught sticking around. People are just hanging out on a worse Facebook, hoping that someone comes along to make sense of it.” In its review from 2010, The Guardian, after encountering a series of glitch-like match suggestions, concluded, “So what have we learned? That true love is unlikely to flourish on Tastebuds.fm and, yes, Napalm Death FANS look exactly as you imagine them to.”

According to the Tastebuds web leaderboard 1,453,203 messages were sent between users of Tastebuds in the last month. Skepticism may be warranted, however. That number didn’t change over the course of writing this article, and the date of their last blog post is “4 years ago.” A tad long even for an EP. This particular romance may be suffering from some significant functionality problems, and perhaps a great deal of lover’s fatigue.

Launched in 2015, this platform is so far the closest thing to an authentic “social (media) network.” In May of this year, SoundShare by Mateus Abras launched SoundShare 2.7.7, an iPhone-only app described as,

“Connecting many music services together into just one social network. A place where you can see and play what your friends are listening to, create collaborative playlists with them (no matter which music service they use), like their songs, add a comment and a lot more.”

Integration with Apple Music, Spotify, and Deezer allows music sharing with others, and collaboration on playlists regardless of which services are being used, while the social aspect of SoundShare works on the Twitter-type follower/following model.

If you give the app access to your streaming service and listen to songs in the app, they are added to your SoundShare music stream after thirty seconds. If you prefer to listen to your music through a different app, you can add songs to your stream, or a SoundShare playlist, via SoundShare’s extension. Your followers can then listen to the songs in your stream using whichever service they prefer, add your songs to their streaming service, incorporate songs into SoundShare playlists, post comments, send SoundShare links, and like songs in your stream. The only limitation is that the songs shared must be the libraries of both services for you and your friends to enjoy them.

According to a review on MacStories, “SoundShare shows a lot of promise. The music streaming market is fragmented and there is little incentive for service providers to build tools to share music across platforms. As a result, third-party developers have begun to step into the void.”

According to a Macworld review, SoundShare is a pretty darn good idea. They are of course concerned about adoption:

“It’s frankly what’s missing in Apple Music. You can make playlists with Apple Music, and your friends can subscribe to them, but there’s no two-way sharing in Apple’s service. As with any social networking app, SoundShare will live or die according to the number of users it can attract. If your friends use it, then you’re likely to want to try it out. For now, there aren’t a lot of users, but perhaps that will change.”

That closing sentiment applies rather appropriately to the space in general—not to mention any attempt in the last 5 years to gain traction as any peripheral social platform (now that the big boys have locked down billions), whether it be for finding your friends, launching discussion threads or sharing image updates. What does the newest act bring to the stage?

FANS has perhaps earned a head start simply by way of its personnel. According to the New York Times, for more than two years concert promoter Peter Shapiro has been developing FANS with a team of 10, including co-founder Seth Schiesel, a former reporter and critic for The New York Times. Schiesel, like Peter, is a die-hard jam-band fan. Investment in FANS has been quoted in the press as being “several million” dollars, supplied by Peter’s company, Dayglo Ventures—the holding company for FANS and some other properties—and a handful of others, including Roger McNamee, the Silicon Valley investor, and Wonderful Union, a company that runs fan websites for stars like Taylor Swift and Drake.

FANS site made its public debut on August 25th with live video feeds from LOCKN’, Peter’s four-day festival in Arrington, Va. The festival featured Phish, My Morning Jacket and Phil Lesh of the Grateful Dead. FANS offers a Twitter-type follower/following model with a clean UX available through an app on iOS or Android or via web on desktop.

I had an opportunity to chat with Jeff Caldwell, Chief Product Officer at FANS, during LOCKN’ Festival in Arrington, Virginia. With him, I dug into the details.

“Music fans—whether they have seen the Grateful Dead 583 times like FANS’ user smarcus1031, or met Nick Carter of the Back Street Boys like Bryttani412 did last March, with everything in between—now have a home,” Jeff said, describing the platform’s high level value proposition. “We offer an insanely large database to build your profile and trigger conversations. There is a timeline structure so every piece of user generated content is tied to the subject, the venue, the show or album [if applicable], and your personal timeline/profile.”

“Show discovery, based on this profile, is in real time/location via the app,” describes Jeff. “It offers a wonderful fan-centric publishing system, and an ability to create and share, if you wish, your fan profile—like LinkedIn for your Fan life.”

I wanted to understand what makes FANS so different from other alternatives, both living and in the graveyard of necro-networks. “There are definitely other platforms out there,” Jeff admitted, “but, fan-based sites are either deep in communications but narrow in subject—like a really good single band fan community—or are wide in subject but narrowly focused on services—like one of the many great event discovery tools already on the market.”

“At FANS, event discovery is just a small part of what we do,” Jeff continued. “And with a million artists in our database all on the same platform, FANS covers more than any single subject—like artist, venue, album, or concert—or genre. FANS founder Peter Shapiro set the mandate that this thing be both “wide” AND “deep,” and we’re doing our best to accomplish that.” 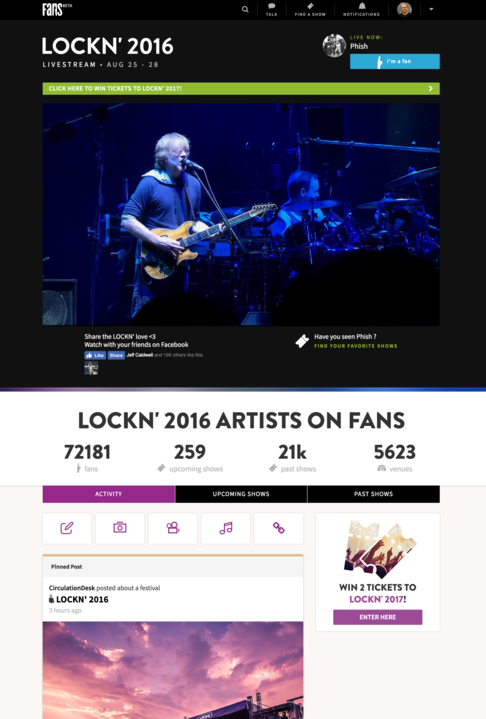 Technically artists can’t add their own material. They can become a verified, “artist as fan” and interact with their community and reveal the “fan” side of themselves along with everyone else. I asked Jeff how this would play out in the future. “First and foremost this is a fan to fan platform,” Jeff said confidently. “There have been and are plenty of artists to fan services or individual offerings. We are very much about easing and enhancing the fan experience as FANS experience it.” That said, there has been artist activity on the network. “Artists, as FANS, can build their timeline, connect with their and other FANS,” Jeff explains. “We see this just starting with Moonalice for Doobie Decibel System and Moonalice, and Natalia Clavier for Thievery Corporation.  We expect a lot more verified artists coming out of LOCKN’ in the next few weeks.”

Back to the adoption discussion, the key success factor for any social network is user volume, and subsequently, their activity. The association with festivals is one way FANS plans to gain and keep momentum with user engagement. The ability to connect on past shows, however, seems to also be a selling point. “The average #’s of past shows added per person is just rocketshipping past the KPI’s we set,” Jeff says enthusiastically. “This tells us that not only is the product working the way we want it, but fans want to build their concert history…”

Will FANS find and keep a spot on the social network rail? Or more accurately, can it create a space that has been suffering from performance jitters and poor attendance? Since their founder is the promoter who’s also putting on the events, FANS’s chances get better with every big gig.