Bees are an essential element of modern society. Their pollination efforts are what make it possible for farmers to raise plants and crops. Unfortunately for beekeepers, it’s often difficult to spot parasites which threaten their bees.The makers of BeeScanning are looking to simplify infection identification with their beekeeping app designed to aid beekeepers in finding said parasites.

BeeScanning works by helping to identify the mites in the images and then enabling the beekeeper to determine whether to treat or not treat the bees. A few of the signs the app looks for include varroa on the side, deformed wings, decapped brood, and punctuated cellocks.

The app functionality enables users to scan for infestations, view the settings, select contacts, search for information, and more.

The makers of BeeScanning are planning to store images and data from the beekeepers. The image analyzing technology is based on cutting-edge neural networks and deep learning. In order to develop these databases, the makers are collecting pictures and survey data taken from 10,000 colonies and contributed by beekeepers worldwide.

During the development process of the beekeeping app, the correlation between how the bees perform, what crop they bring, and how they survive is used for the software development. The makers of the app then compare received data with their own controlled extended survey where alcohol washing is used as a benchmark to measure the infestation.

The neural network is taught by a deep learning professional who has access to a wealth of training data. In order to develop the system, a process of trial and error is used. By repeating the process several thousand times the system is able to become precise to the point that it’s better than a human at identifying infections. 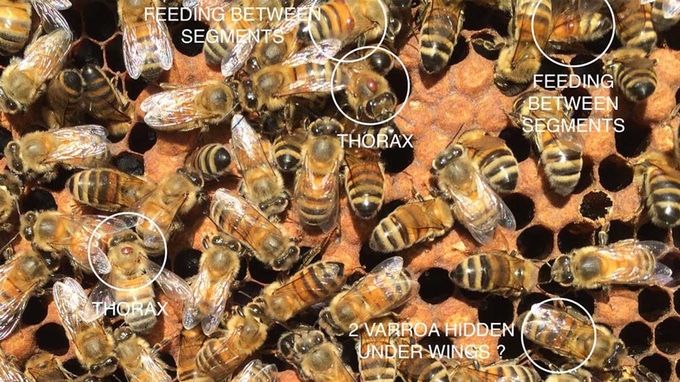 As far as the founding team goes, the team members have over 15 years of experience developing complex systems. Led by Emil Romanus, a professional involved with the development of the 3D simulation game “Apparatus,” the team has been focusing heavily on deep learning for the past few years. Additionally, they’ve made several large investments in the hardware required for these systems to function.

So far the makers of BeeScanning have raised over $6,000 via crowdfunding with an estimated shipping date of June 2017. While that might sound like much, the major assets for the program (about $350,000) are expected to be funded by the European Innovation Program.