It sprang into the SXSW accelerator and snagged the $4,000 top prize. It scored a spot in Techstar’s current Austin class of 2016. In general, it has been crushing it, Cinderella style.

It’s a company that started with two people and is just beginning to grow its team, and it’s already capturing revenue with a physical, shippable, consumer-focused product (all possible signs of the End Times, according to standard startup logic), yet despite this departure from the era’s dominant digital growth strategy, it’s managing to attract some major investor attention.

And yet it’s all been child’s play for Bryan Thomas and Amelia Cosgrove, Co-Founders a of PopUp Play. Thomas’s product management and solar-industry startup success alongside Cosgrove’s lifelong passion and successful career as an engineer, meant they would likely have come out winners in whatever they put their individual minds to next.

What was next for the husband-and-wife team took only about a year to go from the kernel of an idea to the darling of the Austin startup scene and one of the shiniest apples of iTunes’s eye.

And it’s all in good fun.

Designed for kids ages 3-9, PopUp Play starts out with a free iPad app (an Android version is coming this spring) that allows budding architects to design their own fiberboard playhouse by adding window cutouts, doorways, and graphic embellishments. A castle and a gingerbread house are  already available for customizing, and a rocket ship is rolling out soon (followed by other designs still in the works).

The app is fun all on its own, letting kids get creative with some hands-on and highly intuitive design software – if they can put stickers on paper, they can build a castle with PopUp Play. It’s also educational, teaching children basic engineering limitations and helping them understand the connection between the digital world they’re manipulating and the realities of the physical world in which they’ll eventually be building.

Then, with parental approval (and $99 plus $10 for shipping), kids can actually order their personalized playhouses with delivery fulfilled in about a week. The durable fiberboard pieces arrive in a flat-packed box, and they lock together as easily as a toddler’s jigsaw puzzle, forming a castle that pops up in minutes—and it can be taken down just as quickly when you need your living room back.

White fiberboard with large black-lined graphics give PopUp Play’s customers a fun canvas to fill with color, too, offering plenty of opportunity for real-world play and creativity. And of course, there’s the playhouse to play in, hide in, snack in, and maybe even nap in. 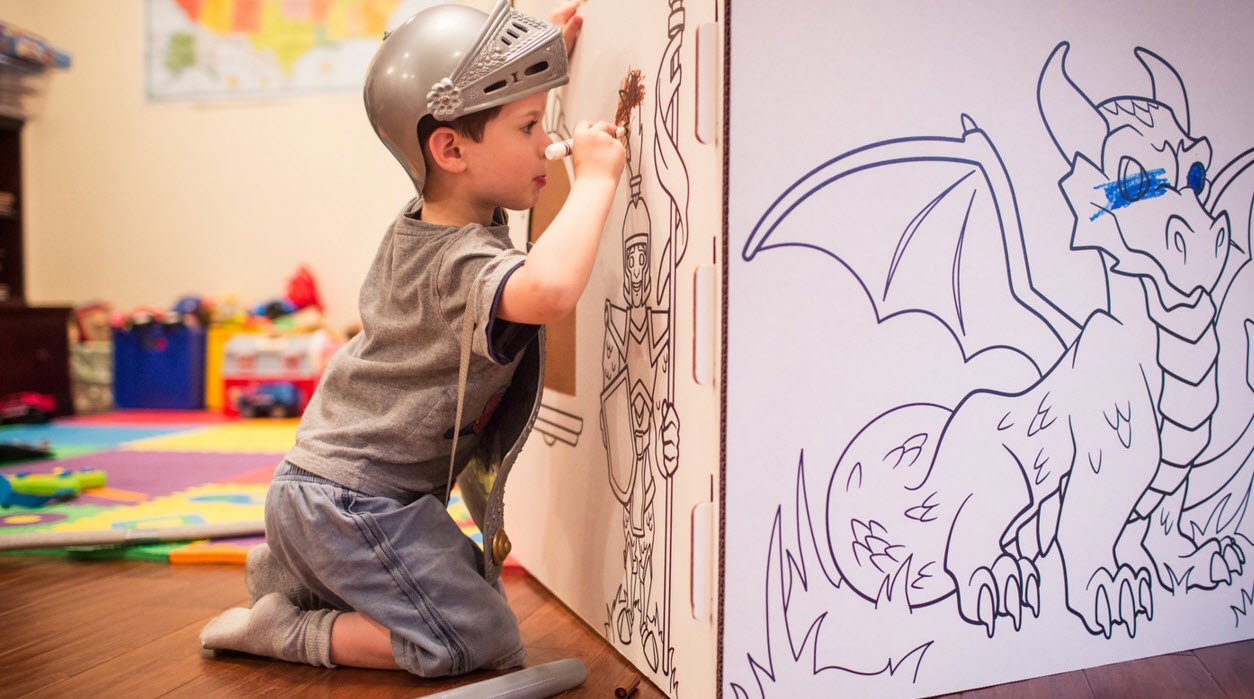 A parent can dream…

It doesn’t end there, though. PopUp Play completes the digital-to-physical cycle through augmented-reality components of its app, layering digital imagery and activities onto the physical castle to encourage further interaction. It’s a whole new way to play, and it makes screen time anything but passive—a great thing for a generation that will grow up with the “Internet of Things.”

PopUp Play isn’t the only company trying to get kids actively involved with tech from an early age. Tech awareness blended with STEM education through kid-targeted content and innovation is a rapidly growing niche.

There’s Oliba, a Bluetooth-enabled device that helps kids keep track of toys while also offering some interactive play options, like being read a story, or hearing Mommy’s voice. The Wonderful World of Creatures and Codes is an engaging picture book that familiarizes young’uns with 26 common HTML tags. There are coding camps and cartoons about building things and blog articles galore gushing about the benefits of screentime in our screen-based world.

The sooner today’s diaper-wetters start wrapping their minds and fingers around the powers of the virtual world, the better able they’ll be to grasp the tech knowledge they need to be billionaire entrepreneurs by the time they’re 15, the thinking goes.

Again, a parent can dream. It’s about time my daughter started pulling her 40lbs of weight around here.

The only problem with all of this is that most companies in the space have forgotten a basic truth: kids need good old fashioned fun.

Kids don’t learn, or do much of anything else, for the promise of a future reward. A dangling carrot might attract their interest for a minute, but the stick from which it’s dangling has to be engaging on its own or they’ll give up on the prize faster than you can say “stop shaving the cat.”

PopUp Play popped into being not with playtime as an afterthought, but at the very heart and soul of the product. Cosgrove traces her passion for engineering to a summer spent playing with her sister in a shipping crate dubbed, The Flying Phone Booth, and wanted to give today’s generation the same fun experience.

And the same opportunity of triggering rather than training their inner engineer. 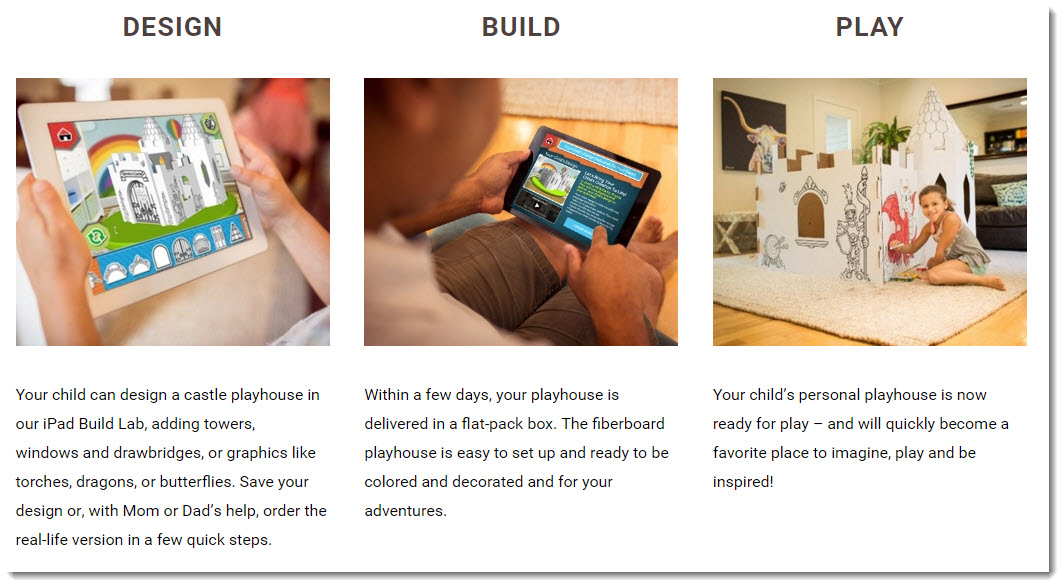 It’s an important distinction. PopUp Play empowers kids, letting them engage in play they love—the app is used by kids for weeks after placing an order, and they’ll spend hours designing and redesigning their castles, according to Thomas—while automatically teaching them basic design and engineering concepts. This isn’t an engineering exercise built into a toy, it’s a fully immersive journey through Imaginationland that incorporates current technology and timeless design principles.

It lets kids create, manipulate, and play in their own world, while coming to a better understanding of the world they share with things like geometry and physics. At a level so intuitive that yes, three year-olds really can grasp the concepts.

This approach is no doubt one of the reasons that few startups in the kid-tech space have met with the same level of early success as PopUp Play.

Reaching revenue with nothing but personal investment and a fully-funded Kickstarter campaign, the company has gone through two accelerators (Capital Factory and SXSW), was named one of Apple’s best apps for kids, attracted some major Austin-area angel investors, and landed a spot in Techstar’s sought-after Austin program. All in a very short time.

It’s a testament to the power of play that pairs the best of twenty-first century technology with the timelessness of kids in forts.

More than that, it’s a testament to the passion and the community-building focus that Thomas and Cosgrove bring to their company. Their goal isn’t merely to let kids design their own real-world playhouses, though that’s cool enough as it is. They’re creating a new way for kids to interact with digital media and devices, sparking an engagement with technology and engineering that will last a lifetime.

From the design function of the app, to the real-world delivery of a technologically-created playhouse, to the augmented reality that blends digital and physical play, it’s hard to imagine anything that could better demonstrate the power of digital or the fun of engineering, from a kid’s perspective.

From this parent’s perspective, too, and clearly from Thomas’s and Cosgrove’s perspectives. They’re more excited about engineering and design than you can imagine, and they’re aiming to build a company that encourages kids to feel the same.

And they’re well on their way.