Using dating apps can be a challenge for anyone–having to worry about choosing the right pictures, writing a bio that’s equal parts witty and intellectual, and initiating conversation in an interesting (but not an imposing) manner. For individuals with disabilities, things can be even more complex. Those from the community who have tried using a dating app or have tried online dating in general have described the experience as being offensive, hurtful, creepy, and revealing of ignorance. Educating the masses on the topic is important, but to address the dating issue, creating a platform specifically for those with physical and mental challenges would be a good first step.

Inclov describes itself as the first ever matchmaking app that helps people with health disorders and mental disabilities find love. It was created by two first-time entrepreneurs, Kalyani Khona and Shankar Srinivasan. Also on the advisory team is Will Bunker, who founded Match.Com. The Android app focuses on the approximately 1 billion individuals across the world who experience some form of physical disability, as well as the mentally challenged and people with chronic health conditions. 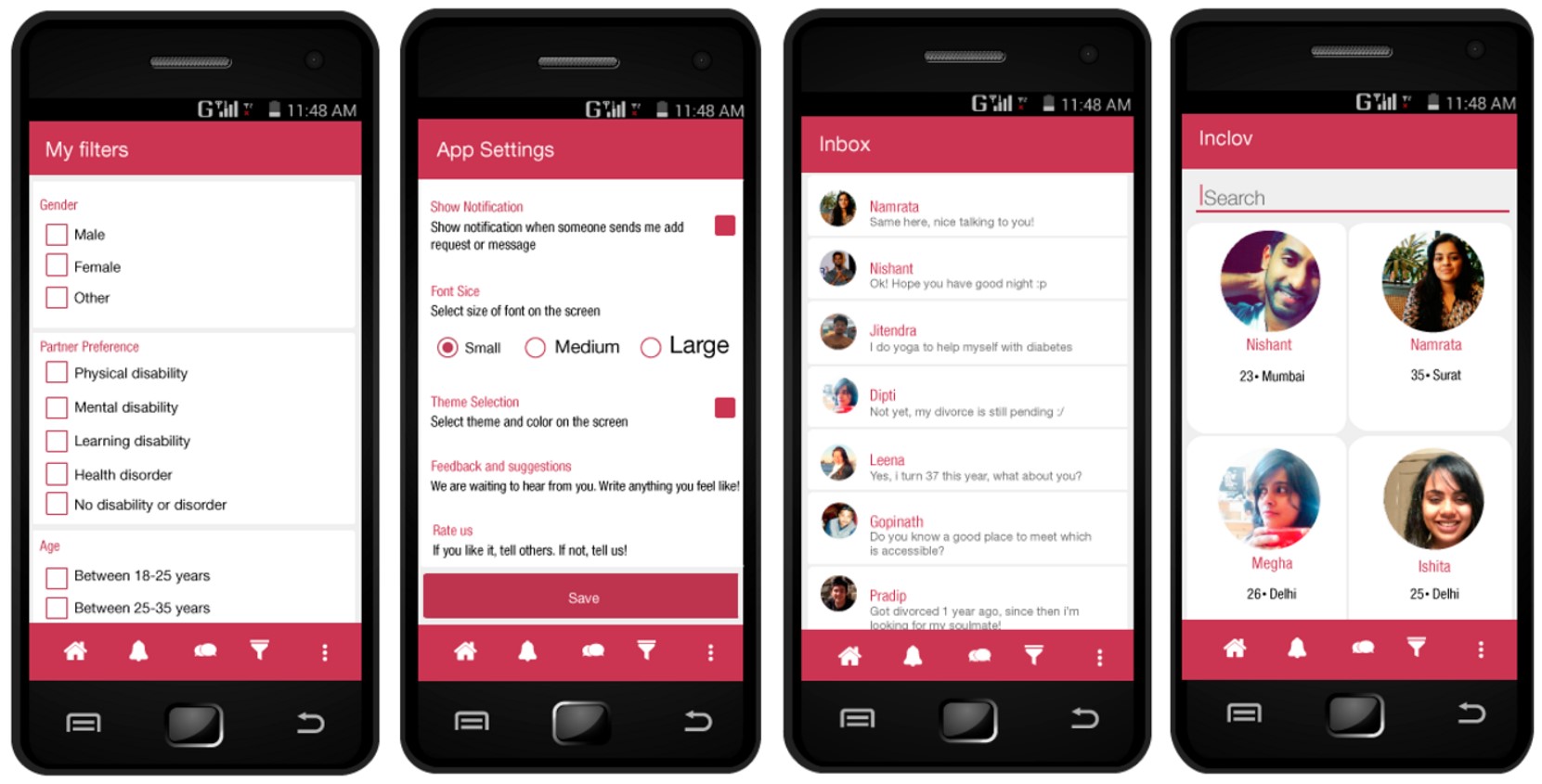 The first thing Inclov does right is ensure accessibility for the visually and hearing impaired. A font size and color selector are available to those with vision affected by retinal disorders or color blindness. There’s a screen reader that works in conjunction with Google’s TalkBack feature so the app is easy to use for the hearing impaired. In an attempt to make users comfortable with sharing personal information without fear of it being circulated, screenshots are disabled.

After filling out standard dating app fields such as a bio and and relationship status (single, divorcee, widow/widower), the app gets more specific. Users are first asked to choose their disability type–it could be a physical, mental, or learning disability–and then the specific name of the condition. Other information for which Inclov asks users is their level of independence (fully independent, need assistance from guardian while traveling, etc.), assistive devices used, residency status, employment status, and the the availability of a cure for their condition.

Asking for all that information may seem intrusive, but the idea is to be open with anything that is pertinent in the context of dating someone with a disability–being “thoughtful” has the potential to take on a whole new meaning in this context. The information can of course help individuals seek out others who share their condition or something similar, which could lead to meeting someone who understands their situation well. Users can be filtered by gender, age, location, and nature of disability.

While Inclov does connect those with physical and mental disorders, it is not a walled garden. Anyone can sign up to use the app, in recognition of the fact that healthy relationships are possible between all kinds of people. Currently, all profiles go through a review process before being given access to all features; this could take up to 24 hours (mine was approved within an hour, so it seems to be a quick process).

Inclov isn’t just a matchmaking app, but also a step towards sensitizing people towards the differently-labled, how to interact with them in an amicable manner, and how to appreciate that while some of their capabilities may seem different, their natural needs for human connection are no less pronounced and no less important than anyone else’s. One of my matches on the app lists “Love” as being one of the cures for her mental disability. Let’s not forget that a little love and respect goes a long way.