The Segway may be a polarizing personal mobility medium, but it has spawned a veritable cottage industry of unconventional transportation devices, from one-wheeled motorbikes, to hoverboards, and all the way to self-balancing two-wheeled scooters. Among the devices that leverage the power of Segway’s gyroscope-based balancing mechanism is Ogo, a self-balancing wheelchair that lets users control its movements without having to use their hands.

Ogo was invented by Kevin Halsall, a New Zealand-based inventor. Halsall began working on a more advanced design after seeing his paraplegic friend constantly struggle with everyday activities using a classic wheelchair. Ogo’s first prototype was made by tearing down a new Segway unit and modifying it to be better suited for handicapped users.

Similar to Segways, the Ogo sports various sensors which help it gauge user input and convert it into movement. While Segways sometimes require input via the handlebars (while making turns, for example), the Ogo wheelchair does away with any use of the hands thanks to a control mechanism built from the ground up that is based on interpreting subtle core body movements.

The Ogo responds to users’ motion similar to how a Segway would; leaning forward moves the wheelchair forward, and leaning back puts it in reverse. Lateral movement is achieved by leaning to the right or left.

Apart from the intuitive navigation, the Ogo also serves as a great exercise tool. According to its makers, the wheelchair works the core and upper body as a result of how it is controlled. If users do get tired of using their body to steer the wheelchair around, they have the option of switching to a joystick control by simply flipping a switch. 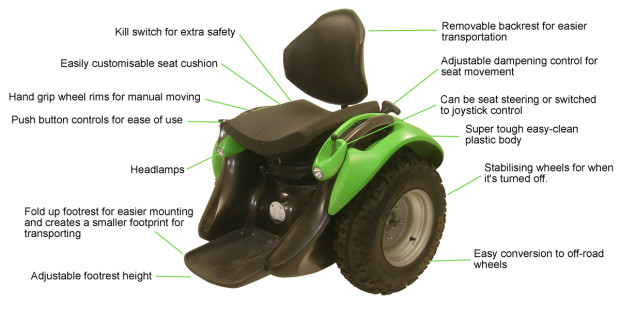 The Ogo is the first and only self-balancing, hands-free wheelchair in the world, but there are other companies out there working on improving accessibility devices for the disabled. The Smart Drive MX2 by Max Mobility houses a 250W motor so it can carry users over inclines or difficult terrain without requiring too much physical exertion. The Scalevo has retractable rubber tracks which take over from regular wheels when users need to ascend a flight of stairs. It’s a space that many are certainly glad to watch grow.

Ogo is currently live on IndieGogo, raising funds to build 10 new prototypes which will serve as precursors to the final production model. They’ve already managed to raise almost $80,000, which is just over 3o percent of the $240,000 fixed goal; the campaign comes to a close in about a week. A $1,000 pledge earns backers a unit of the Ogo, with deliveries expected to begin September 2017.