As virtual reality continues to gain traction, it’s becoming easier than ever to produce quality VR content. Once limited to studios with deep pockets, the technology is now getting to the point where it’s reaching smartphone adoption levels. While we’ve previously covered virtual reality cameras here at SnapMunk, there’s been a recent development worth noting. It’s an Android compatible virtual reality clip-on camera from phone maker Huawei, called the Insta360 Air.

To use the device, users only have to connect Insta360 Air to a smartphone’s USB port and download the companion mobile app. Once this is complete, users can instantly start sharing 360° photos and videos. The device currently supports YouTube and Twitter, and there’s also trials in progress for Facebook compatibility. The companion mobile app features image and video editing tools; four view modes; a photo capturing function; a video capturing function; and a gallery. The camera also features four modes:  flat mode, sphere mode, VR mode, and planet mode.

Insta360 Air is compact and portable, designed and styled to be an extension of the smartphone. It’s equipped with a 210° dual fish-eye lens and real-time stitching so 360° images It’s designed to take 3k resolution stills and 2k videos. In addition to being used for photography, it also comes with a cable so users can connect the device to a laptop to capture video or live stream without having to worry about battery life.

There’s also the Insta360 Pro which is a six-lens professional camera which boasts 360° video in up to 8k, along with three-dimensional (3D) video, and high-definition live streaming. “We’re thrilled to partner with Huawei to grow the global community of 360-degree and VR creators,” said JK Liu, founder, and CEO of Insta360. “Like us, Huawei is committed to reinventing photography, and they believe in our products as the best way to introduce users to the future of the camera.” 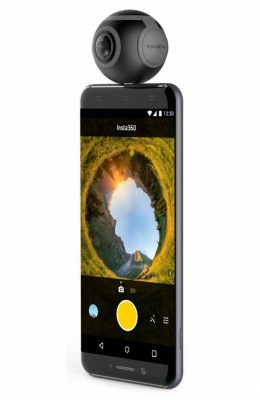 To date, the makers of Insta360 have raised over $230,000 via crowdfunding with an estimated shipping date of March 2017. Early bird pricing starts at $99 for the Insta360 Air. The pro version of the camera is due to be released in Q2 of 2017. It comes in four colors – matte black; rose pink; white and silver; and rich gold.

Those with iOS devices can use the Insta360 Nano which clips onto an iPhone 7, 7 Plus, 6, 6 Plus, 6s or 6s Plus. The packaging of the device also is designed to convert into a Google Cardboard viewer. This version is currently available and sells for $199.